In providing answers, religion defines the spiritual world and spiritual forces, including divine beings. For example, it helps answer questions like, “How was the world created?” “Why do we suffer?” “Is there a plan for our lives?” and “Is there an afterlife?” As another function, religion provides emotional comfort in times of crisis. Religious rituals bring order, reassurance, and organization through shared familiar symbols and patterns of behavior.

One of the most important functions of religion, from a functionalist perspective, is the opportunities it creates for socializing and the formation of groups. It provides social support and offers a place to meet others who hold similar values, as well as a place to seek help (spiritual and material) in times of need. Moreover, it can foster group cohesion and integration. Because religion can be central to many people’s concept of themselves, sometimes there is an “in-group” versus “out-group” feeling toward other religions in our society or within a particular practice. Religion promotes social control: it reinforces social norms such as appropriate styles of dress, following the law, conforming to gender roles, and regulating sexual behavior.

On an extreme level, the dysfunctions of this type of in-group/ out-group mentality has resulted in violent episodes such as the Spanish Inquisition (1478-1834) and the Salem witch trials (1692-1693), as well as extremist acts by anti-Semitic groups, jihadists, Christian fundamentalists, and many more. Social control can be a function of religious groups but it can also be dysfunctional when prescriptive social norms produce inequality between men and women, between different castes or classes, and/or when they diminish individual agency and choice within a religious group. 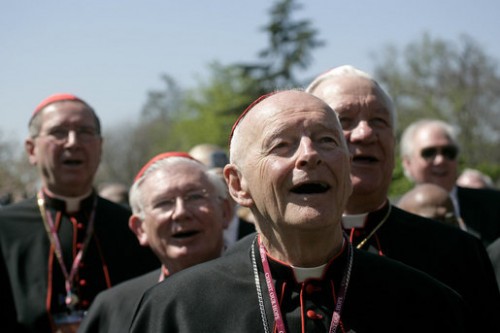 Conflict theorists view religion as an institution that helps maintain patterns of social inequality. For example, the Vatican has a tremendous amount of wealth, while the average income of Catholic parishioners is small. According to this perspective, religion has been used to support the “divine right” of oppressive hereditary monarchies and to justify unequal social structures, like India’s rigidly hierarchical caste system.

Conflict theorists are critical of the way many religions promote the idea that believers should be satisfied with existing circumstances because they are divinely ordained. This power dynamic has been used by Christian institutions for centuries to keep poor people poor and to teach them that they shouldn’t be concerned with what they lack because their “true” reward (from a religious perspective) will come after death. Conflict theorists also point out that those in power in a religion are often able to dictate practices, rituals, and beliefs through their interpretation of religious texts or via proclaimed direct communication with the divine, perhaps through “revelation” or a process of “divination.”

The feminist perspective is considered to be another conflict theory view that focuses specifically on gender inequality. In terms of religion, feminist theorists assert that, although women are typically the ones to socialize children into a religion, they have traditionally held very few positions of power within religions. A few religions and religious denominations are more gender equal, but male dominance remains the norm of most. In addition to examining power relations within religious organizations, feminists also attend to the ways that religion justifies and sustains a belief in patriarchy, or the assumption that men should occupy positions of authority in society.

Rising from the concept that our world is socially constructed, symbolic interactionism studies the symbols and interactions of everyday life. To interactionists, beliefs and experiences are not sacred unless individuals in a society regard them as sacred. The Star of David in Judaism, the cross in Christianity, and the crescent and star in Islam are examples of sacred symbols. Interactionists are interested in the negotiated meanings that different societies and groups attribute to these symbols.

Because interactionists study one-on-one, everyday interactions between individuals, a scholar using this approach might ask questions focused on this dynamic. The interaction between religious leaders and practitioners, the role of religion in the ordinary components of everyday life, and the ways people express religious values in social interactions—all might be topics of study to an interactionist.

Watch this video for a deeper look at each theoretical perspective on religion.