Why It Matters: Aging and the Elderly

Why learn about the processes, perceptions, and challenges of growing old? 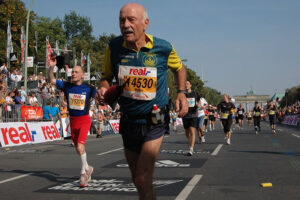 Figure 1. Elderly people may not always conform to society’s expectations of their attitudes or their abilities. While we don’t know whether or not these marathon participants are running competitively, it’s clear the older person in the foreground is ahead of many younger people. (Credit: Mike Kaden/flickr)

Why are Americans so obsessed with looking and feeling younger? Think of U.S. movies and television shows you have watched recently. Did any of them feature older actors and actresses? What roles did they play? How were these older actors portrayed? Were they portrayed as characters who were healthy and happy? Were they cast as main characters in a love story? Or were they cast as grouchy, sick, incapable old people?

Many media portrayals of the elderly reflect negative cultural attitudes toward aging. In the United States, society tends to glorify youth and associate it with beauty and sexuality. In comedies, the elderly are often associated with grumpiness or hostility. Rarely do the roles of older people convey the fullness of life experienced by seniors—as employees, lovers, or the myriad roles they have in real life. What values does this reflect?

One hindrance to society’s fuller understanding of aging is that people rarely understand the process of aging until they reach old age themselves. (As opposed to childhood, for instance, which we can all look back on.) Therefore, myths and assumptions about the elderly and aging are common. Many stereotypes exist surrounding the realities of being an older adult. While individuals often encounter stereotypes associated with race and gender and are thus more likely to think critically about them, many people accept age stereotypes without question (Levy 2002). Consider this: At your school or workplace, you have likely had the opportunity (or may be required) to attend workshops on racial equity, cultural sensitivity, sexual harassment, and so on. But even though the elderly are all around us (and increasing in number every day), very few institutions conduct similar workshops or forums about the elderly. Each culture has a certain set of expectations and assumptions about aging, all of which are part of our socialization.

In this module you’ll examine the sociological processes that accompany growing old. You will also learn how and why people are living longer. Medical advancements, nutrition and health care have all contributed to the rise in life expectancy; however, age, race, social class, gender and other social factors all play a role in how long a person will live. Age is not merely a biological function of the number of years one has lived, or of the physiological changes the body goes through during the life course. It is also a product of the social norms and expectations that apply to each stage of life. Age represents the wealth of life experiences that shape whom we become.