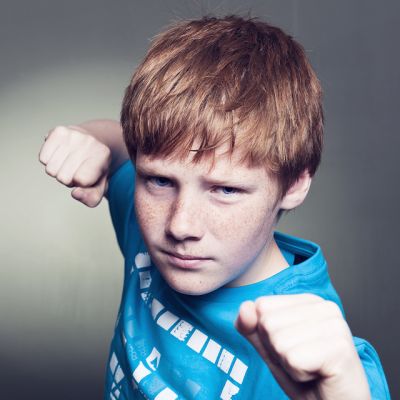 Experiencing violence as an adolescent increases the odds of that adolescent later becoming an abusive adult, although it is not a given. Watch this video to learn more about the effects of abuse and perpetuated violence.

You can view the transcript for “Does Having Abusive Parents Mean You’ll Become One?” here (opens in new window).

Virginia Tech, Columbine, Stoneman Douglas High School, Santa Fe High School, Sandy Hook, Aurora, Las Vegas, Orlando—all sites of horrific and tragic mass shootings. Why are they so common? And what led the perpetrators to commit these acts of violence? Several possible factors may work together to create a fertile environment for mass murder in the United States. Most commonly suggested include:

Read this NPR article on school shooters to learn more about common threads shared by some who commit mass violence.

Developmental models of anxiety and depression also treat adolescence as an important period, especially in terms of the emergence of gender differences in prevalence rates that persist through adulthood (Rudolph, 2009) [10] Starting in early adolescence, compared with males, females have rates of anxiety that are about twice as high and rates of depression that are 1.5 to 3 times as high (American Psychiatric Association, 2013) [11] Although the rates vary across specific anxiety and depression diagnoses, rates for some disorders are markedly higher in adolescence than in childhood or adulthood. For example, prevalence rates for specific phobias are about 5% in children and 3%–5% in adults but 16% in adolescents. Additionally, some adolescents sink into major depression, a deep sadness and hopelessness that disrupts all normal, regular activities. Causes include many factors such as genetics and early childhood experiences that predate adolescence, but puberty may push vulnerable children, especially girls into despair.

During puberty, the rate of major depression more than doubles to an estimated 15%, affecting about one in five girls and one in ten boys. The gender difference occurs for many reasons, biological and cultural (Uddin et al., 2010) [12] Anxiety and depression are particularly concerning because suicide is one of the leading causes of death during adolescence. Some adolescents experience suicidal ideation (distressing thoughts about killing oneself) which become most common at about age 15 (Berger, 2019) [13] and can lead to parasuicide, also called attempted suicide or failed suicide. Suicidal ideation and parasuicide should be taken seriously and serve as a warning that emotions may be overwhelming.

This short video emphasizes how suicide is a major health issue and concern for teenagers, and also how it is important for parents, caregivers, teachers, and friends to be open enough to talk about it.

You can view the transcript for “Talking with Kids About Suicide” here (opens in new window).

Developmental models focus on interpersonal contexts in both childhood and adolescence that foster depression and anxiety (e.g., Rudolph, 2009) [14] Family adversity, such as abuse and parental psychopathology, during childhood sets the stage for social and behavioral problems during adolescence. Adolescents with such problems generate stress in their relationships (e.g., by resolving conflict poorly and excessively seeking reassurance) and select into more maladaptive social contexts (e.g., “misery loves company” scenarios in which depressed youths select other depressed youths as friends and then frequently co-ruminate as they discuss their problems, exacerbating negative affect and stress). These processes are intensified for girls compared with boys because girls have more relationship-oriented goals related to intimacy and social approval, leaving them more vulnerable to disruption in these relationships. Anxiety and depression then exacerbate problems in social relationships, which in turn contribute to the stability of anxiety and depression over time.

major depression:
feelings of hopelessness, lethargy, and worthlessness that last two weeks or more
parasuicide:
any potentially lethal action against the self that does not result in death. (also called attempted suicide or failed suicide)
suicide:
the act of intentionally causing one’s own death
suicidal ideation:
thinking about suicide, usually with some serious emotional and intellectual or cognitive overtones