Divorce refers to the legal dissolution of a marriage. Depending on societal factors, divorce may be more or less of an option for married couples. Despite popular belief, divorce rates in the United States actually declined for many years during the 1980s and 1990s, and only just recently started to climb back up—landing at just below 50% of marriages ending in divorce today (Marriage & Divorce, 2016); however, it should be noted that divorce rates increase for each subsequent marriage, and there is considerable debate about the exact divorce rate. Are there specific factors that can predict divorce? Are certain types of people or certain types of relationships more or less at risk for breaking up? Indeed, there are several factors that appear to be either risk factors or protective factors.

Pursuing education decreases the risk of divorce. So too does waiting until we are older to marry. Likewise, if our parents are still married we are less likely to divorce. Factors that increase our risk of divorce include having a child before marriage and living with multiple partners before marriage, known as serial cohabitation (cohabitation with one’s expected marital partner does not appear to have the same effect). Of course, societal and religious attitudes must also be taken into account. In societies that are more accepting of divorce, divorce rates tend to be higher. Likewise, in religions that are less accepting of divorce, divorce rates tend to be lower. See Lyngstad & Jalovaara (2010) for a more thorough discussion of divorce risk. 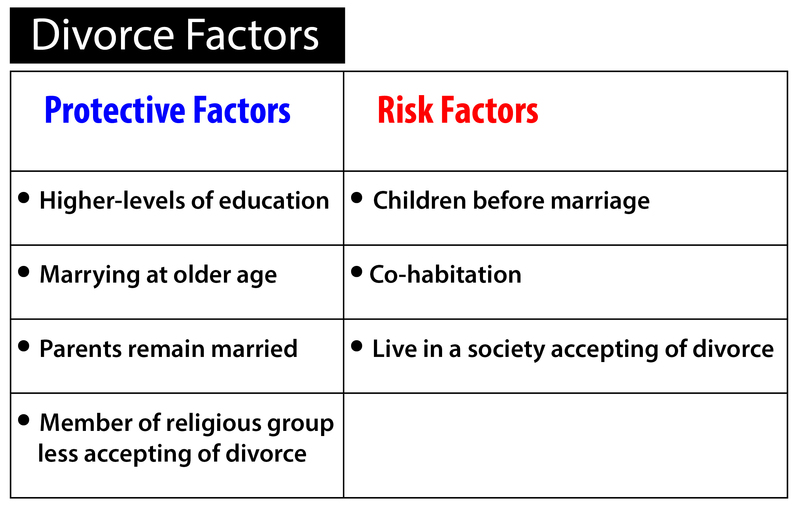 If a couple does divorce, there are specific considerations they should take into account to help their children cope. Parents should reassure their children that both parents will continue to love them and that the divorce is in no way the children’s fault. Parents should also encourage open communication with their children and be careful not to bias them against their “ex” or use them as a means of hurting their “ex” (Denham, 2013; Harvey & Fine, 2004; Pescosoido, 2013).

In 2013 Brown and Lin referred to a “gray divorce revolution”. The figures certainly seem to support their contention. The rate of divorce had doubled for those aged 50-64 in the twenty years between 1990 and 2010. One in 10 persons who divorced in 1990 was over age 50, by 2010 it was over 1 in 4, accounting for some 25% of all divorces in the USA. Various explanations have been offered for this phenomenon. The “baby boomers” had divorced in large numbers in early adulthood, and a large number of remarriages within this group also ended in divorce. Remarriages are about 2.5 times more likely to end in divorce than first marriages. People are living longer and are no longer satisfied with relationships deemed insufficient to meet their emotional needs. The shift to companionate marriage in the later half of the 20th century had followed this segment of the population into midlife, with divorce rates diminishing or stabilizing for other segments of the population.

Socio-emotional selectivity theory would predict that the shift of perspective from time spent to time remaining would predict people valuing experiences and relationships in the present, rather than holding onto memories of the past, or an idealized vision of what might yet come to be. Nevertheless, Cohen (2018) predicts a substantial decline in divorce rates for those who are not part of the “baby boom” generation, and that marriage rates will stabilize once more in subsequent generational cohorts.[1] There has been a marked decline in divorce rates for those under 45 and the link between college education and marriage is now quite pronounced. People are now waiting until later in life to marry for the first time. The average age is now 27 for women and 29 for men, and it is even higher in urban centers like NYC. However, Reeves et al (2016) show that just over half of women with high school diplomas in their 40s are married, with the figures rising to 75% of those women with Bachelors degrees.[2] Increasing economic insecurity may have played a part in ensuring that marriage may increasingly be correlated with educational attainment and socioeconomic status rather than cohorts based solely on age.

U.S. households are now increasingly single person households. The number is reckoned to be in excess of 28% of all households, and may become the most common form in the near future,  if trends in Europe are anything to go by. There, the number of one-person households in countries and Denmark and Germany exceeds 40%, with other major European countries like France not far from reaching that proportion. The number of Americans who are unmarried continues to increases. About 45% of all Americans over the age of 18 are unmarried, in 1960 that number was 28% (US Census, 2017). Around 1 in 4 young adults in the USA today will never marry (Pew, 2014). The diversity of households will continue to increase. Currently, the number of one person households in Japan and Germany is double that of households with children under 18.

Middle adulthood seems to be the prime time for remarriage, as the Pew Research Center reported in 2014 that of those aged between 55-64 who had previously been divorced, 67% had remarried. In 1960, it was 55%.[3] Every other age category reported declines in the number of remarriages. Notably, remarriage is more popular with men than women, a gender gap that not only persists, but grows substantially in middle and later adulthood. Cohabitation is the main way couples prepare for remarriage, but even when living together, many important issues are still not discussed. Issues concerning money, ex-spouses, children, visitation, future plans, previous difficulties in marriage, etc. can all pose problems later in the relationship. Few couples engage in premarital counseling or other structured efforts to cover this ground before entering into marriage again.

The divorce rate for second marriages is reckoned to be in excess of 60%, and for third marriages even higher. There is little research in the area of repartnering and remarriage, and the choices and decisions made during the process. A notable exception is that of Brown et al (2019) who offer an overview of the little that there is, and their own conclusions. One important constraint which they note is that men prefer younger women, at least as far as remarriage is concerned. Indeed, the gap in age is often more pronounced in second marriages than in the first, according to Pew (2014).[4] Allied to the fact that women live, on average, five years longer in the USA, then the pool of available partners shrinks for women. Brown et al (2019), also argue that this is further reinforced by the fact that women have a preference for retaining their autonomy and not playing the role of caregiver again. Perhaps the most interesting aspect of their research is the fact that those who repartner tend to do so quickly, and that longer term singles are more likely to remain so.

Reviews are mixed as to how happy remarriages are. Some say that they have found the right partner and have learned from mistakes. But the divorce rates for remarriages are higher than for first marriages. This is especially true in stepfamilies for reasons which we have already discussed. People who have remarried tend to divorce more quickly than those first marriages. This may be due to the fact that they have fewer constraints on staying married (are more financially or psychologically independent).

The chances of remarrying depend on a number of things. First, it depends on the availability of partners. As time goes by, there are more available women than men in the marriage pool as noted above. Consequently, men are more likely than women to remarry. This lack of available partners is experienced by all women, but especially by African-American women where the ratio of women to men is quite high. Women are more likely to have children living with them, and this diminishes the chance of remarriage as well. And marriage is more attractive for males than females (Seccombe & Warner, 2004). Men tend to remarry sooner (3 years after divorce on average vs. 5 years on average for women).

Many women do not remarry because they do not want to remarry. Traditionally, marriage has provided more benefits to men than to women. Women typically have to make more adjustments in work (accommodating work life to meet family demands or the approval of the husband) and at home (taking more responsibility for household duties). Education increases men’s likelihood of remarrying but may reduce the likelihood for women. Part of this is due to the expectation (almost an unspoken rule) referred to as the “marriage gradient.” This rule suggests among couples, the man is supposed to have more education than the woman. Today, there are more women with higher levels of education than before and women with higher levels are less likely to find partners matching this expectation. Being happily single requires being economically self-sufficient and being psychologically independent. Women in this situation may find remarriage much less attractive.

One key factor in understanding some of these issues is the level of continuing parental investment in adult children, and possibly their children. The number of grandparents raising children in the USA is reckoned to be in the vicinity of 2.7 million. In addition, there is the continued support of adult children themselves which can be substantial. The Pew Research document “Helping Adult Children” (2015) gives some indication of the nature and extent of this support, which tends to be even greater in Europe than the USA, with 60% of Italian parents reporting an adult child residing with them most of the year.

Most academic research on reconstituted or blended families focuses on younger adults and the kind of difficulties which ensue when trying to blend children raised by a different spouse/partner and one or more adults with perhaps different views or experience on how this might be accomplished. All sorts of issues can arise: conflicted loyalties, different attitudes to discipline, role-ambiguity, and the simple fact of a far-reaching change easily perceived as a disruption on the part of a child. Given the rise of the gray divorce, it is increasingly the case that this age group will encounter later age, or adult children (sometimes called the “boomerang generation”), in the house of their new partners. Such encounters are even more likely given the rise of the so-called “silver surfer” utilizing online dating sites, and the fact that an increasing number of adult children continue to live at home given the increased cost of housing.

There has not been substantial research on recoupling and blended families in later life, but Papernow (2018) notes that all of the factors normally in play with younger children can be just as present, and even exacerbated, by the fact that previous relationships have had an even longer time to grow and solidify. In addition, stepfamilies formed in later life may have very difficult and complicated decisions to make about estate planning and elder care, as well as navigating daily life together, as an increasing number of young adults live at home (“grown but not gone”). Papernow lists five challenges for later-life stepfamilies: