Business Cycles and Growth in the AD–AS Model

Business Cycles in the AD-AS Model

Business cycles represent the slowing down, declining and speeding up of the economy, or more formally, recessions and expansions. The AD-AS model gives us one way to understand business cycles. Recessions occur as a result of negative demand or supply shocks, which cause the equilibrium level of real GDP to fall substantially below potential GDP, as occurred at the equilibrium point E1 in Figure 1. 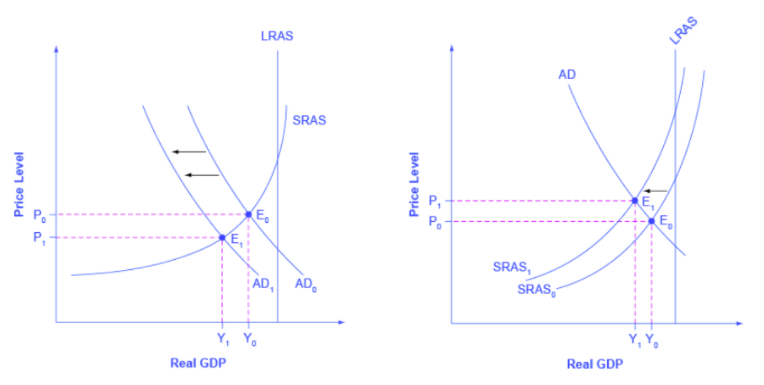 Unemployment in the AD–AS Diagram 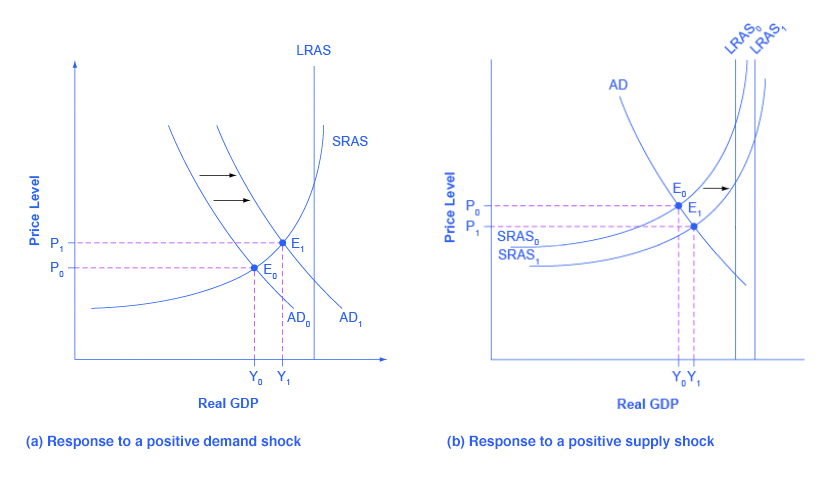 Expansions occur as a result of positive demand or supply shocks, which cause the equilibrium level of real GDP to rise towards, and sometimes beyond, potential GDP, as occurred at the equilibrium point E1 in Figure 2. As GDP rises, cyclical unemployment falls.

Inflationary Pressures in the AD–AS Diagram 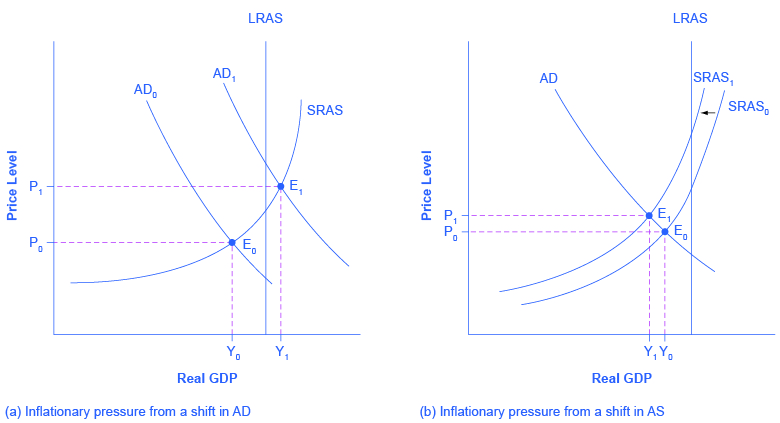 An alternative source of inflationary pressures can occur due to a rise in input prices that affects many or most firms across the economy—perhaps an important input to production like oil or labor—and causes the aggregate supply curve to shift back to the left. In Figure 3(b), the shift of the AS curve to the left also increases the price level from P0 at the original equilibrium (E0) to a higher price level of P1 at the new equilibrium (E1). In effect, the rise in input prices ends up, after the final output is produced and sold, being passed along in the form of a higher price level for outputs.

The AD–AS diagram shows only a one-time shift in the price level. It does not address the question of what would cause inflation either to vanish after a year, or to sustain itself for several years. There are two explanations for why inflation may persist over time. One way that continual inflationary price increases can occur is if the government continually attempts to stimulate aggregate demand in a way that keeps pushing the AD curve when it is already in the steep portion of the AS curve. A second possibility is that, if inflation has been occurring for several years, a certain level of inflation may come to be expected. For example, if consumers, workers, and businesses all expect prices and wages to rise by a certain amount, then these expected rises in the price level can become built into the annual increases of prices, wages, and interest rates of the economy. These two reasons are interrelated, because if a government fosters a macroeconomic environment with inflationary pressures, then people will grow to expect inflation. However, the AD–AS diagram does not show these patterns of ongoing or expected inflation in a direct way.

Economic Growth in the AD-AS Model 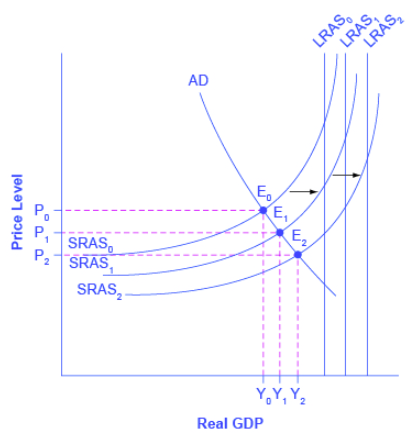 However, the factors that determine the speed of this long-term economic growth rate—like investment in physical and human capital, technology, and whether an economy can take advantage of catch-up growth—do not appear directly in the AS–AD diagram. In the short run, GDP falls and rises in every economy, as the economy dips into recession or expands out of recession.

Review and summarize these concepts you’ve learned about the aggregate demand-aggregate supply model in the following video.

You can view the transcript for “Long-Run Aggregate Supply, Recession, and Inflation- Macro Topic 3.4 and 3.5” here (opens in new window).

Macroeconomics takes an overall view of the economy, which means that it needs to juggle many different concepts. For example, start with the three macroeconomic goals of growth, low inflation, and low unemployment. Aggregate demand has four elements: consumption, investment, government spending, and exports less imports. Aggregate supply reveals how businesses throughout the economy will react to a higher price level for outputs. Finally, a wide array of economic events and policy decisions can affect aggregate demand and aggregate supply, including government tax and spending decisions; consumer and business confidence; changes in prices of key inputs like oil; and technology that brings higher levels of productivity. The aggregate demand–aggregate supply model is one of the fundamental diagrams in this text because it provides an overall framework for bringing these factors together in one diagram. Indeed, some version of the AS–AD model will appear in every module in the rest of this text.