Policy Implications: No Phillips Curve Tradeoff in the Long Run

What Causes the Phillips Curve to Shift?

We observed that the Phillips Curve relationship seemed to fall apart when the curve began shifting during the 1970s. How can we explain what happened?

Economists have concluded that two factors cause the Phillips curve to shift. The first is changes in people’s expectations about inflation, and the second is supply shocks, like the Oil Crisis of the mid-1970s, which first brought stagflation into our vocabulary. Let’s explore each of these reasons.

Milton Friedman, the founder of Monetarist Economics, a Neoclassical perspective, explained the first factor. He pointed out that there may be an apparent tradeoff between inflation and unemployment when workers expect no inflation, but when they realize inflation is occurring, workers demand higher wages, and the tradeoff disappears. Robert Lucas, a prominent New Classical economist, described this as an epiphenomenon, that is, a statistical mirage. Starting from full employment (what economists call the natural rate of unemployment), an increase in aggregate demand causes a movement up the short run aggregate supply curve, raising the price level, while increasing real GDP and thus reducing unemployment. When workers realize prices are rising, they raise their inflationary expectations and demand increased wages to compensate for the higher cost of living. Increased wages cause the short run aggregate supply curve to shift up, with the result that we end up with higher inflation, but with the same (natural) rate unemployment as when we started. Watch the following video to see how this is explained graphically.

Watch this video to see how the long run, vertical Phillips Curve is derived from the long run, neoclassical aggregate supply curve.

You can view the transcript for “The Phillips Curve (Macro Review) – Macro Topic 5.2” here (opens in new window). 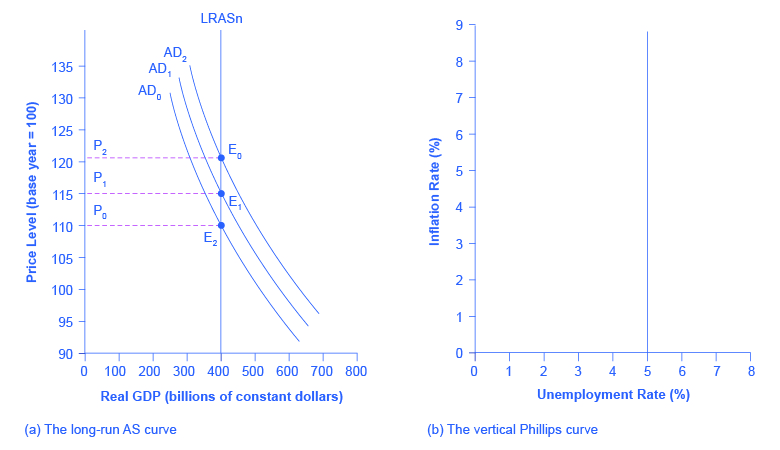 An increase in aggregate demand from AD0 to AD1 to AD2 will ultimately cause inflation, but no long run change in unemployment. The unemployment rate on this long-run Phillips curve will be the natural rate of unemployment. Milton Friedman, the famous Monetarist economist and winner of the Nobel Prize in economics, called this the Natural Rate Hypothesis. He summed up the neoclassical view of the long-term Phillips curve tradeoff in a 1967 speech: “[T]here is always a temporary trade-off between inflation and unemployment; there is no permanent trade-off.”

Traditional Keynesian economics did not account for the possibility of supply shocks, that is shifts in the short run aggregate supply curve. A negative supply shock, like a significant increase in the price of energy, causes an upward shift in AS, which raises prices, and reduces GDP raising unemployment. In the long run, unemployment returns to the natural rate, while inflation is at a higher level. Thus, both factors (changes in inflationary expectations and supply shocks) cause the Phillips Curve to be vertical with no long run tradeoff between inflation and unemployment.

Natural Rate Hypothesis
Neoclassical view that since the long run aggregate supply curve is vertical, the long run Phillips Curve is also vertical; there is no tradeoff in the long run between inflation and unemployment