Robert Barro and other New Classical economists introduced another criticism of fiscal policy. If people have rational expectations, a change in government budgets may impact private saving. For example, whenever the government runs a budget deficit, people might reason: “Well, a higher budget deficit means that I’m just going to owe more taxes in the future to pay off all that government borrowing, so I’ll start saving now.” If the government runs budget surpluses, people might reason: “With these budget surpluses (or lower budget deficits), the country will be able to afford a tax cut sometime in the future. I won’t bother saving as much now.”

The theory that rational private households might shift their saving to offset government saving or borrowing is known as Ricardian equivalence because the idea has intellectual roots in the writings of the early nineteenth-century economist David Ricardo (1772–1823). If Ricardian equivalence holds completely true, then any increase in government expenditure that increases the budget deficit would lead to a corresponding decrease in consumption expenditure, as households save more in anticipation of their future tax liability. The net effect on aggregate demand then is zero and fiscal policy is entirely ineffective. 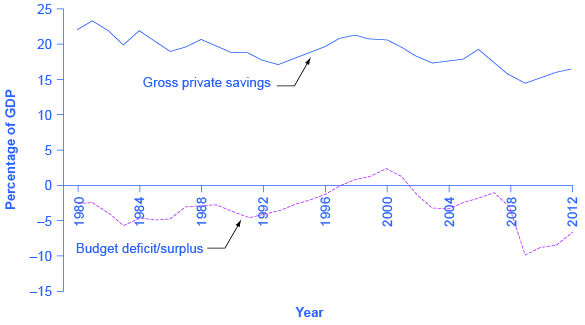 So private saving does increase to some extent when governments run large budget deficits, and private saving falls when governments reduce deficits or run large budget surpluses. However, the offsetting effects of private saving compared to government borrowing are much less than one-to-one. Thus, fiscal policy can be effective, though perhaps less so in the absence of Ricardian equivalence. In addition, this effect can vary a great deal from country to country, from time to time, and over the short run and the long run.

Fiscal policy doesn’t always work as designed, Some of these reasons are because businesses and consumers preempt policy changes or act in unpredictable ways. Consumers may demonstrate Ricardian equivalence by choosing to save money from a tax cut, which would cause no shift to aggregate demand and have no effect on the multiplier. Watch the selected clip from this video to learn more. The video begins by diving into ways that businesses may act in ways that offset fiscal or monetary policies.

You can view the transcript for “Fiscal Policy and Crowding Out” here (opens in new window).

Ricardian equivalence:
the theory that rational private households might increase their saving in anticipation of future tax liabilities from government borrowing, and vice versa
twin deficits:
deficits that occur when a country is running both a trade and a budget deficit