We have seen that the formula for aggregate demand is AD = C + I + G + X – M, where M is the total value of imported goods. Why is there a minus sign in front of imports? Does this mean that more imports will result in a lower level of aggregate demand?

Actually, imports are already included in the formula in the form of consumption (C) or investment (I). When an American consumer or business buys a foreign product, it gets counted along with all other consumption and investment. Since the income generated does not go to American producers, but rather to producers in another country, it would be wrong to count this as part of domestic demand. Therefore, imports added in consumption or investment are subtracted back out in the M term of the equation.

Because of the way in which the demand equation is written, it is easy to make the mistake of thinking that imports are bad for the economy. Just keep in mind that every negative number in the M term has a corresponding positive number in the C or I terms, and they always cancel out.

The Conference Board, a business-funded research organization, carries out national surveys of consumers and executives to gauge their degree of optimism about the near-term future economy. The Conference Board asks a number of questions about how consumers and business executives perceive the economy and then combines the answers into an overall measure of confidence, rather like creating an index number to represent the price level from a variety of individual prices. For consumer confidence, the overall level of confidence in 1985 is used as a base year and set equal to 100, and confidence in every other year can be compared to that base year. Measured on this scale, for example, consumer confidence rose from 100 in August 2006 to 111 in February 2007, but had plummeted to 56 by early 2010. As of October 2017, the index had a value of 125.9.

The OECD, an group consisting of the major developed countries, publishes the Business Confidence Index. After sharply declining during the Great Recession, the measure has risen above 100 again and is back to long-term averages. Of course, none of these survey measures are very precise. They can however, suggest when confidence is rising or falling, as well as when it is relatively high or low compared to the past.

Because a rise in confidence is associated with higher consumption and investment demand, it will lead to an outward shift in the AD curve, and a move of the equilibrium, from E0 to E1, to a higher quantity of output and a higher price level, as you can see in the following interactive graph (Figure 1):

Consumer and business confidence often reflect macroeconomic realities; for example, confidence is usually high when the economy is growing briskly and low during a recession. However, economic confidence can sometimes rise or fall for reasons that do not have a close connection to the immediate economy, like a risk of war, election results, foreign policy events, or a pessimistic prediction about the future by a prominent public figure. U.S. presidents, for example, must be careful in their public pronouncements about the economy. If they offer economic pessimism, they risk provoking a decline in confidence that reduces consumption and investment and shifts AD to the left, and in a self-fulfilling prophecy, contributes to causing the recession that the president warned against in the first place. A shift of AD to the left, and the corresponding movement of the equilibrium, from E0 to E1, to a lower quantity of output and a lower price level, can be seen in the following interactive graph (Figure 2):

During a recession, when unemployment is high and many businesses are suffering low profits or even losses, the U.S. Congress often passes tax cuts. During the recession of 2001, for example, a tax cut was enacted into law. Figure 3 illustrates the effect of tax cuts using the AD-AS model. The original equilibrium during a recession is at point E0, relatively far from the full employment level of output. The tax cut, by increasing consumption, shifts the AD curve to the right. At the new equilibrium (E1), real GDP rises and unemployment falls and, because in this diagram the economy has not yet reached its potential or full employment level of GDP, any rise in the price level remains muted. Read the following feature to consider the question of whether economists favor tax cuts or oppose them. 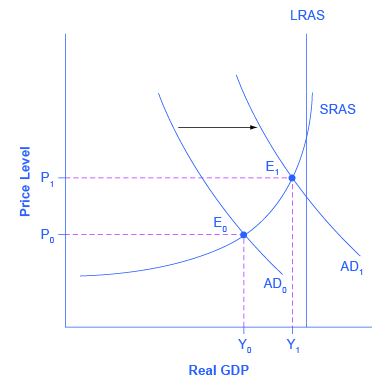 With the AS–AD framework in mind, many economists might readily believe that the Reagan tax cuts of 1981, which took effect just after two serious recessions, were beneficial economic policy. Similarly, the Bush tax cuts of 2001 and the Obama tax cuts of 2009 were enacted during recessions. However, some of the same economists who favor tax cuts in time of recession would be much more dubious about identical tax cuts at a time such as 2017 when the economy is performing well and cyclical unemployment is low.

Watch this video to review aggregate demand and think about other things that may cause the aggregate demand curve to shift. Note that the video only mentions two reasons for a downward sloping AD curve (the wealth effect and the interest rate effect.) There is also a relative, or foreign, price effect, which says that as the aggregate price level rises, domestic goods and services become more expensive relative to imports. The result is a decrease in net export expenditures.

You can view the transcript for “Aggregate Demand- Macro Topic 3.1” here (opens in new window).

Any changes in C, I, G, or Xn (another way of depicting net exports) will shift demand. The video helped you consider the following situations. What will happen to the aggregate demand curve in each situation?

business confidence:
If businesses feel more confident, ceteris paribus, then firms tend to spend more on investment, believing that the future payoff from that investment will be substantial; if business confidence drops, then investment spending declines
consumer confidence:
when consumers feel more confident about the future of the economy, ceteris paribus, they tend to increase spending; when they feel less confident they tend to decrease spending
demand shocks:
events that shift the aggregate demand curve
positive demand shock:
a rightward shift in AD
negative demand shock:
a leftward shift in AD