Costs in the Short Run

Suppose we think about the production function backwards:

where the g just means the function f in reverse. This equation tells us how much labor we need to produce a given level of output, with the fixed capital stock we have. If we knew the cost of labor and capital, we could then compute the total cost of producing any level of output. It is to this that we next turn. 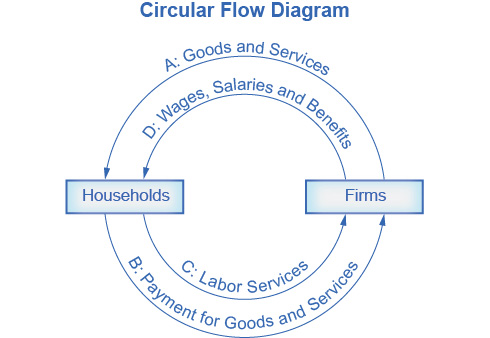 We now have all the information necessary to determine a firm’s costs.

What we observe is that the cost increases as the firm produces higher quantities of output. This is pretty intuitive, since producing more output requires greater quantities of inputs, which cost more dollars to acquire.

Now focus on the whole number quantities of output. We’ll eliminate the fractions (or partial widgets) from the table:

Suppose widget workers receive $10 per hour. Multiplying the Workers row by $10 (and eliminating the blanks) gives us the cost of producing different levels of output. 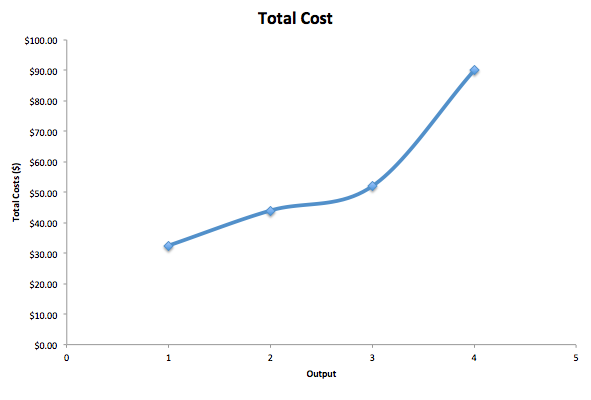 Figure 2. The Total Cost curve for Widgets. This shows cost increasing at an increasing rate as the firm produces more output.

Now that we have the basic idea of the cost origins and how they are related to production, let’s drill down into the details, by examining average, marginal, fixed, and variable costs.

We can measure costs in a variety of ways. Each way provides its own insight into costs. Sometimes firms need to look at their cost per unit of output, not just their total cost. There are two ways to measure per unit costs. The most intuitive way is average cost. Average cost is the cost on average of producing a given quantity. We define average cost as total cost divided by the quantity of output produced.

If producing two widgets costs a total of $44, the average cost per widget is

We can see the Widget Cost table redrawn below with average and marginal cost added.

Remember, we explained earlier that fixed inputs are those that cannot be easily adjusted, like a building lease, and variable inputs are those that can be changed easily, like pizza ingredients. We can apply these same terms to costs. Fixed costs are the costs of the fixed inputs. Fixed costs do not change regardless of the level of production, at least not in the short term. Whether you produce a lot or a little, the fixed costs are the same. One example is the rent on a factory or a retail space. Once you sign the lease, the rent is the same regardless of how much you produce, at least until the lease runs out.

Fixed costs can take many other forms: for example, the cost of machinery or equipment to produce the product, research and development costs to develop new products, even an expense like advertising to popularize a brand name. The level of fixed costs varies according to the specific line of business: for instance, manufacturing computer chips requires an expensive factory, but a local moving and hauling business can get by with almost no fixed costs at all if it rents trucks by the day when needed.

Variable costs, on the other hand, are the costs of the variable inputs; they are incurred in the act of producing—the more you produce, the greater the variable cost. Labor is treated as a variable cost, since producing a greater quantity of a good or service typically requires more workers or more work hours. Variable costs would also include raw materials.

As a concrete example of fixed and variable costs, consider a barber shop called “The Clip Joint.” The data for output and costs are shown in Table 7. The fixed costs of operating the barber shop, including the space and equipment, are $160 per day. The variable costs are the costs of hiring barbers, which in our example is $80 per barber each day. The first two columns of the table show the quantity of haircuts the barbershop can produce as it hires additional barbers. The third column shows the fixed costs, which do not change regardless of the level of production. The fourth column shows the variable costs at each level of output. These are calculated by taking the amount of labor hired and multiplying by the wage. For example, two barbers cost: 2 × $80 = $160. Adding together the fixed costs in the third column and the variable costs in the fourth column produces the total costs in the fifth column. So, for example, with two barbers the total cost is: $160 + $160 = $320.

The relationship between the quantity of output being produced and the cost of producing that output is shown graphically in the Figure 4. The fixed costs are always shown as the vertical intercept of the total cost curve; that is, they are the costs incurred when output is zero so there are no variable costs. You can see from the graph that once production starts, total costs and variable costs rise. While variable costs may initially increase at a decreasing rate, at some point they begin increasing at an increasing rate. This is caused by diminishing marginal returns, which is easiest to see with an example. As the number of barbers increases from zero to one in the table, output increases from 0 to 16 for a marginal gain of 16; as the number rises from one to two barbers, output increases from 16 to 40, a marginal gain of 24. From that point on, though, the marginal gain in output diminishes as each additional barber is added.

Figure 4. “The Clip Joint” Total Costs. At zero production, the fixed costs of $160 are still present. As production increases, variable costs are added to fixed costs, and the total cost is the sum of the two.

For example, as the number of barbers rises from two to three, the marginal output gain is only 20; and as the number rises from three to four, the marginal gain is only 12. To understand the reason behind this pattern, consider that a one-man barber shop is a very busy operation. The single barber needs to do everything: say hello to people entering, answer the phone, cut hair, sweep up, and run the cash register. A second barber reduces the level of disruption from jumping back and forth between these tasks, and allows a greater division of labor and specialization. The result can be greater increasing marginal returns. However, as other barbers are added, the advantage of each additional barber is less, since the specialization of labor can only go so far. The addition of a sixth or seventh or eighth barber just to greet people at the door will have less impact than the second one did. This is the pattern of diminishing marginal returns. At some point, you may even see negative returns as the additional barbers begin bumping elbows and getting in each other’s way. In this case, the addition of still more barbers would actually cause output to decrease, as shown in the last row of Table 1. As a result, the total costs of production will begin to rise more rapidly as output increases.

This pattern of diminishing marginal returns is common in production. As another example, consider the problem of irrigating a crop on a farmer’s field. The plot of land is the fixed factor of production, while the water that can be added to the land is the key variable cost. As the farmer adds water to the land, output increases. But adding more and more water brings smaller and smaller increases in output, until at some point the water floods the field and actually reduces output. Diminishing marginal returns occur because, at a given level of fixed costs, each additional input contributes less and less to overall production.

Watch this clip to review and assess your ability to identify the variable, fixed, total, and marginal costs.

factor payments:
what the firm pays for the use of the factors of production-includes raw materials, rent, wages and salaries, interest and dividends, and profit for entrepreneurship

fixed cost:
cost of the fixed inputs; expenditure that a firm must make before production starts and that does not change regardless of the production level

total cost:
the sum of fixed and variable costs of production

variable cost:
cost of production that increases with the quantity produced; the cost of the variable inputs