How Governments Can Encourage Innovation

A number of different government policies can increase the incentives to innovate, including: guaranteeing intellectual property rights, government assistance with the costs of research and development, and cooperative research ventures between universities and companies.

One way to increase new technology is to guarantee the innovator an exclusive right to that new product or process. Intellectual property rights include patents, which give the inventor the exclusive legal right to make, use, or sell the invention for a limited time, and copyright laws, which give the author an exclusive legal right over works of literature, music, film/video, and pictures. For example, if a pharmaceutical firm has a patent on a new drug, then no other firm can manufacture or sell that drug for twenty-one years, unless the firm with the patent grants permission. Without a patent, the pharmaceutical firm would have to face competition for any successful products, and could earn no more than a normal rate of profit. With a patent, a firm is able to earn monopoly profits on its product for a period of time—which offers an incentive for research and development. In general, how long can “a period of time” be? The following paragraph discusses patent and copyright protection timeframes for some works you might have heard of. 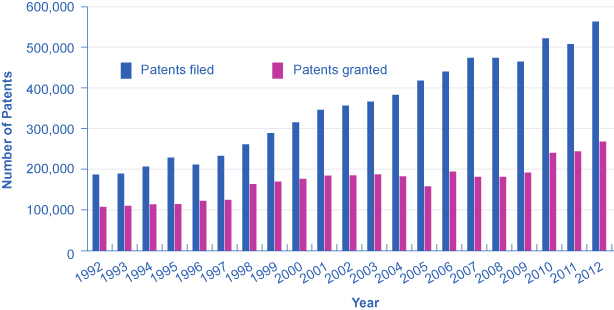 Figure 1. Patents Filed and Granted, 1981–2012. The number of applications filed for patents increased substantially beginning in the 1990s, due in part to the invention of the internet, which has led to many other inventions and to the 1998 Copyright Term Extension Act. (Source: http://www.uspto.gov/web/offices/ac/ido/oeip/taf/us_stat.htm)

While patents provide an incentive to innovate by protecting the innovator, they are not perfect. For example:

Because patents are imperfect and do not apply well to all situations, alternative methods of improving the rate of return for inventors of new technology are desirable. Some of these possible alternative policies are described in the following sections.

The first column of Table 1 shows the sources of total U.S. spending on research and development; the second column shows the total dollars of R&D funding by each source. The third column shows that, relative to the total amount of funding, 26% comes from the federal government, about 67% of R&D is done by industry, and less than 3% is done by universities and colleges.

In the 1960s the federal government paid for about two-thirds of the nation’s R&D. Over time, the U.S. economy has come to rely much more heavily on industry-funded R&D. The federal government has tried to focus its direct R&D spending on areas where private firms are not as active. One difficulty with direct government support of R&D is that it inevitably involves political decisions about which projects are worthy. The scientific question of whether research is worthwhile can easily become entangled with considerations like the location of the congressional district in which the research funding is being spent.

A complementary approach to supporting R&D that does not involve the government’s close scrutiny of specific projects is to give firms a reduction in taxes depending on how much research and development they do. The federal government refers to this policy as the research and experimentation (R&E) tax credit. According to the Treasury Department: “. . . the R&E Credit is also a cost-effective policy for stimulating additional private sector investment. Most recent studies find that each dollar of foregone tax revenue through the R&E Tax Credit causes firms to invest at least a dollar in R&D, with some studies finding a benefit to cost ratio of 2 or 2.96.”

State and federal governments support research in a variety of ways. For example, United for Medical Research, a coalition of groups that seek funding for the National Institutes of Health, (which is supported by federal grants), states: “NIH-supported research added $69 billion to our GDP and supported seven million jobs in 2011 alone.” Other institutions, such as the National Academy of Scientists and the National Academy of Engineers, receive federal grants for innovative projects. The Agriculture and Food Research Initiative (AFRI) at the United States Department of Agriculture awards federal grants to projects that apply the best science to the most important agricultural problems, from food safety to childhood obesity. Cooperation between government-funded universities, academies, and the private sector can spur product innovation and create whole new industries.

intellectual property:
the body of law including patents, trademarks, copyrights, and trade secret law that protect the right of inventors to produce and sell their inventions