For some products, the government erects barriers to entry by prohibiting or limiting competition. Under U.S. law, no organization but the U.S. Postal Service is legally allowed to deliver first-class mail. Many states or cities have laws or regulations that allow households a choice of only one electric company, one water company, and one company to pick up the garbage. Most legal monopolies are considered utilities—products necessary for everyday life—that are socially beneficial to have. As a consequence, the government allows producers to become regulated monopolies, to insure that an appropriate amount of these products is provided to consumers.

Innovation takes time and resources to achieve. Suppose a company invests in research and development and finds the cure for the common cold. In this world of near ubiquitous information, other companies could take the formula, produce the drug, and because they did not incur the costs of research and development (R&D), undercut the price of the company that discovered the drug. Given this possibility, many firms would choose not to invest in research and development, and as a result, the world would have less innovation. To prevent this from happening, the Constitution of the United States specifies in Article I, Section 8: “The Congress shall have Power . . . To Promote the Progress of Science and Useful Arts, by securing for limited Times to Authors and Inventors the Exclusive Right to their Writings and Discoveries.” Congress used this power to create the U.S. Patent and Trademark Office, as well as the U.S. Copyright Office. A patent gives the inventor the exclusive legal right to make, use, or sell the invention for a limited time. In the United States, exclusive patent rights last for 20 years. The idea is to provide limited monopoly power so that innovative firms can recoup their investment in R&D, but then to allow other firms to produce the product more cheaply once the patent expires.

Natural monopoly occurs where the economics of an industry naturally lead to a single firm dominating the industry. Economies of scale and sole ownership (or control) of a natural resource are two common examples of natural monopoly. 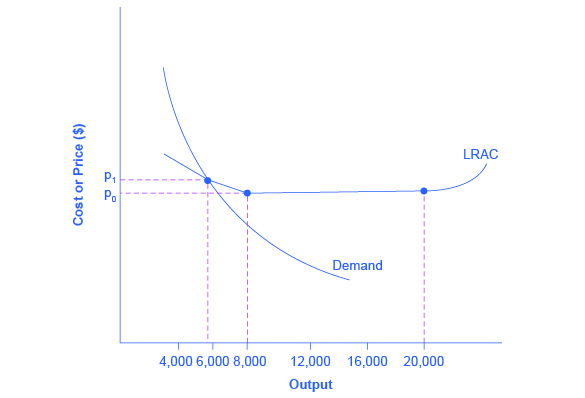 The following video presents one interesting example of a decreasing cost industry.

Watch the selected clip from this video to learn about why Dalton, Georgia is known as the “carpet capital of the world.”

Control of a Physical Resource

Another type of natural monopoly occurs when a company has sole ownership (or majority control) of a scarce physical resource for which there are no close substitutes. In the U.S. economy, one historical example of this pattern occurred when ALCOA—the Aluminum Company of America—controlled most of the supply of bauxite, a key mineral used in making aluminum. Back in the 1930s, when ALCOA controlled most of the bauxite, other firms were simply unable to produce enough aluminum to compete.

Regulation and Deregulation of Monopolies


Summing Up Barriers to Entry

Watch this video for an overview about monopolies, including their barriers to entry and why the are problematic for market economy.

barriers to entry:
the legal, technological, or market forces that may discourage or prevent potential competitors from entering a market
copyright:
a form of legal protection to prevent copying, for commercial purposes, original works of authorship, including books and music
deregulation:
removing government controls over setting prices and quantities in certain industries
economies of scale:
when a firm faces decreasing long run average costs as its level of output increases
intellectual property:
the body of law including patents, trademarks, copyrights, and trade secret law that protect the right of inventors to produce and sell their inventions
legal monopoly:
legal prohibitions against competition, such as regulated monopolies and intellectual property protection
monopoly:
a situation in which one firm produces all of the output in a market
natural monopoly:
economic conditions in the industry, for example, economies of scale or control of a critical resource, that limit effective competition
patent:
a government rule that gives the inventor the exclusive legal right to make, use, or sell the invention for a limited time
predatory pricing:
when an existing firm uses sharp but temporary price cuts to discourage new competition
trade secrets:
methods of production kept secret by the producing firm
trademark:
an identifying symbol or name for a particular good and can only be used by the firm that registered that trademark