Consumer equilibrium, that is, the combination of goods and services that will maximize a consumer’s utility, depends on the consumers tastes and preferences, as expressed by his or her marginal utility numbers, the prices of those items and and the budget (or income) the consumer has. In this section, we will explore how changes in a consumer’s income and changes in the prices of goods and services affect consumer choice. Then, because the budget constraint framework can be used to analyze how quantities demanded change because of price movements, the budget constraint model can illustrate the underlying logic behind demand curves.

After thinking about her total utility and marginal utility and applying the decision rules for maximizing utility explained earlier, Jazmin chooses point M, with eight concerts and three overnight getaways as her utility-maximizing choice. 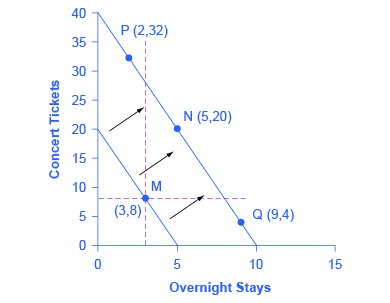 Now, assume that the income Jazmin has to spend on these two items rises to $2,000 per year. Since the prices of the two products haven’t changed, doubling her budget allows Jazmin to purchase twice as many of each. This can be shown as a rightward shift in the budget constraint with intercepts as (0, 40) and (10, 0). How does this rise in income alter her utility-maximizing choice? Jazmin will again consider the total utility and marginal utility that she receives from concert tickets and overnight getaways to identify the consumer equilibrium on the new budget line. But how will her new choice relate to her original choice?

All of these choices are theoretically possible, depending on Jazmin’s personal preferences as expressed through the total and marginal utility she would receive from consuming these two goods. When income rises, the most common reaction is to purchase more of both goods, like choice N, which is to the upper right relative to Jazmin’s original choice M, although exactly how much more of each good will vary according to personal taste. Conversely, when income falls, the most typical reaction is to purchase less of both goods. As we learned already in the module on elasticity, goods and services are called normal goods if a rise in income leads to a rise in the quantity consumed of that good and a fall in income leads to a fall in quantity consumed.

However, depending on Jazmin’s preferences, a rise in income could cause consumption of one good to increase while consumption of the other good declines. A choice like P means that a rise in income caused her quantity consumed of overnight stays to decline, while a choice like Q would mean that a rise in income caused her quantity of concerts to decline. Goods where demand declines as income rises (or conversely, where the demand rises as income falls) are called “inferior goods.” An inferior good occurs when people trim back on a good as income rises, because they can now afford the more expensive choices that they prefer. For example, a higher-income household might eat fewer hamburgers or be less likely to buy a used car, and instead eat more steak and buy a new car.

For analyzing the possible effect of a change in price on consumption, let’s again use a concrete example. Figure 2 represents the consumer choice of Sergei, who chooses between purchasing baseball bats and cameras. A price increase for baseball bats would have no effect on the ability to purchase cameras, but it would reduce the number of bats Sergei could afford to buy. Thus a price increase for baseball bats, the good on the horizontal axis, causes the budget constraint to rotate inward, as if on a hinge, from the vertical axis. As in the previous section, the point labeled M represents the originally preferred point on the original budget constraint, which Sergei has chosen after contemplating his total utility and marginal utility and the tradeoffs involved along the budget constraint. In this example, the units along the horizontal and vertical axes are not numbered, so the discussion must focus on whether more or less of certain goods will be consumed, not on numerical amounts.

Figure 2. How a Change in Price Affects Consumption Choices. The original utility-maximizing choice is M. When the price rises, the budget constraint shifts in to the left. The dashed lines make it possible to see at a glance whether the new consumption choice involves less of both goods, or less of one good and more of the other. The new possible choices would be fewer baseball bats and more cameras, like point H, or less of both goods, as at point J. Choice K would mean that the higher price of bats led to exactly the same quantity of bats being consumed, but fewer cameras. Choices like L are ruled out as theoretically possible but highly unlikely in the real world, because they would mean that a higher price for baseball bats means a greater quantity consumed of baseball bats.

The typical response to higher prices is that a person chooses to consume less of the product with the higher price. This occurs for two reasons, and both effects can occur simultaneously. The substitution effect, which is more intuitive, occurs when the price of one good increases, giving consumers have an incentive to consume less of the good with the relatively higher price and more of the other good with a relatively lower price. In other words, the higher price of one good causes consumers to substitute the cheaper good for the more expensive one. The income effect, which is more subtle, notes that a higher price means, in effect, the buying power of one’s budget has been reduced (even though actual income has not changed), which leads to buying less of both goods (assuming both are normal goods).

In this example, the higher price for baseball bats would cause Sergei to buy fewer bats, both because of the substitution effect and because of the income effect. Exactly how much will a higher price for bats cause Sergei consumption of bats to fall? Figure 2 suggests a range of possibilities. Sergei might react to a higher price for baseball bats by purchasing the same quantity of bats, but cutting his consumption of cameras. This choice is the point K on the new budget constraint, straight below the original choice M. Alternatively, Sergei might react by dramatically reducing his purchases of bats and instead buy more cameras.

Note that the income effect also causes Sergei’s demand for cameras to fall, while the substitution effect increases demand. The net effect is not clear without specific measurements of the two effects. The key takeaway here is that it would be imprudent to assume that a change in the price of one good will only or primarily affect the good whose price is changed, while the quantity consumed of other goods remains the same. Since Sergei purchases all his products out of the same budget, a change in the price of one good can also have a range of effects, either positive or negative, on the quantity consumed of other goods. In short, a higher price typically causes reduced consumption of the good in question, but it can affect the consumption of other goods as well.

budget constraint:
all possible consumption combinations of goods that someone can afford, given the prices of goods, when all income is spent; the boundary of the opportunity set
income effect:
a higher price means that, in effect, the buying power of income has been reduced, even though actual income has not changed; always happens simultaneously with a substitution effect
substitution effect:
when a price changes, consumers have an incentive to consume less of the good with a relatively higher price and more of the good with a relatively low price