Introduction to Discrimination in Labor Markets

What you’ll learn to do: analyze the economic implications of discrimination and immigration policies 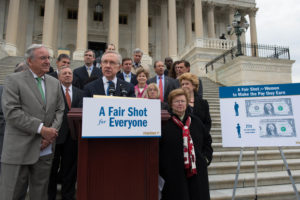 Discrimination occurs in a labor market when employers pay workers with the same economic characteristics, such as education, experience, and skill, are paid different amounts because of race, gender, religion, age, or disability status. In the United States, female workers on average earn less than male workers, and black workers on average earn less than white workers. There is controversy over the extent to which pay differences are caused by differences in factors like education and job experience, or by pure discrimination.

Free markets can allow discrimination to occur, but the threat of a loss of sales or a loss of productive workers can also create incentives for a firm not to discriminate. A range of public policies can be used to reduce earnings gaps between men and women or between white and other racial/ethnic groups: requiring equal pay for equal work, and attaining more equal educational outcomes.

In this section, we will examine these policies as well as the economic take on immigration.