Biogeography is the study of the geographic distribution of living things and the abiotic factors that affect their distribution. Abiotic factors such as temperature and rainfall vary based mainly on latitude and elevation. As these abiotic factors change, the composition of plant and animal communities also changes. For example, if you were to begin a journey at the equator and walk north, you would notice gradual changes in plant communities. At the beginning of your journey, you would see tropical wet forests with broad-leaved evergreen trees, which are characteristic of plant communities found near the equator. As you continued to travel north, you would see these broad-leaved evergreen plants eventually give rise to seasonally dry forests with scattered trees. You would also begin to notice changes in temperature and moisture. At about 30 degrees north, these forests would give way to deserts, which are characterized by low precipitation.

Moving farther north, you would see that deserts are replaced by grasslands or prairies. Eventually, grasslands are replaced by deciduous temperate forests. These deciduous forests give way to the boreal forests found in the subarctic, the area south of the Arctic Circle. Finally, you would reach the Arctic tundra, which is found at the most northern latitudes. This trek north reveals gradual changes in both climate and the types of organisms that have adapted to environmental factors associated with ecosystems found at different latitudes. However, different ecosystems exist at the same latitude due in part to abiotic factors such as jet streams, the Gulf Stream, and ocean currents. If you were to hike up a mountain, the changes you would see in the vegetation would parallel those as you move to higher latitudes.

Ecologists who study biogeography examine patterns of species distribution. No species exists everywhere; for example, the Venus flytrap is endemic to a small area in North and South Carolina. An endemic species is one which is naturally found only in a specific geographic area that is usually restricted in size. Other species are generalists: species which live in a wide variety of geographic areas; the raccoon, for example, is native to most of North and Central America.

Species distribution patterns are based on biotic and abiotic factors and their influences during the very long periods of time required for species evolution; therefore, early studies of biogeography were closely linked to the emergence of evolutionary thinking in the eighteenth century. Some of the most distinctive assemblages of plants and animals occur in regions that have been physically separated for millions of years by geographic barriers. Biologists estimate that Australia, for example, has between 600,000 and 700,000 species of plants and animals. Approximately 3/4 of living plant and mammal species are endemic species found solely in Australia (Figure 1). 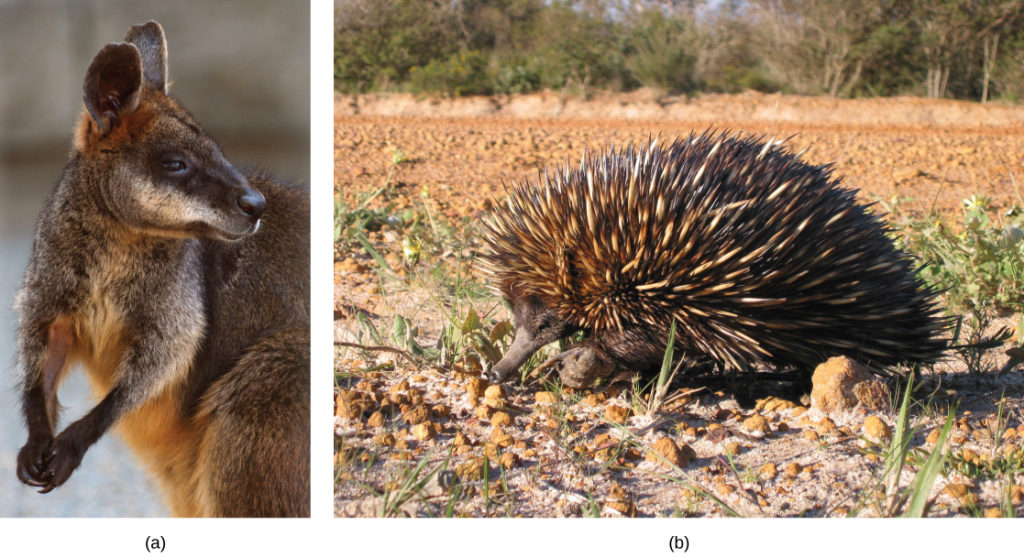 Sometimes ecologists discover unique patterns of species distribution by determining where species are not found. Hawaii, for example, has no native land species of reptiles or amphibians, and has only one native terrestrial mammal, the hoary bat. Most of New Guinea, as another example, lacks placental mammals.

Check out this video to observe a platypus swimming in its natural habitat in New South Wales, Australia. Note that this video has no narration.

Plants can be endemic or generalists: endemic plants are found only on specific regions of the Earth, while generalists are found on many regions. Isolated land masses—such as Australia, Hawaii, and Madagascar—often have large numbers of endemic plant species. Some of these plants are endangered due to human activity. The forest gardenia (Gardenia brighamii), for instance, is endemic to Hawaii; only an estimated 15–20 trees are thought to exist.