Communities are complex entities that can be characterized by their structure (the types and numbers of species present) and dynamics (how communities change over time). Understanding community structure and dynamics enables community ecologists to manage ecosystems more effectively. 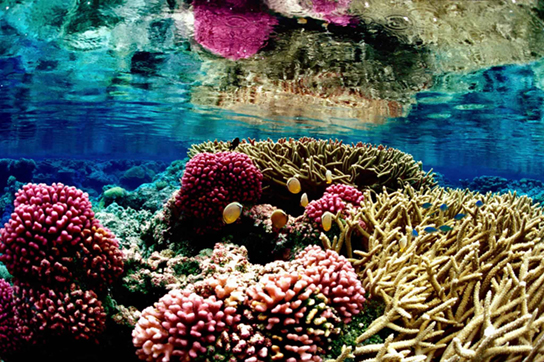 Foundation species are considered the “base” or “bedrock” of a community, having the greatest influence on its overall structure. They are usually the primary producers: organisms that bring most of the energy into the community. Kelp, brown algae, is a foundation species, forming the basis of the kelp forests off the coast of California.

Foundation species may physically modify the environment to produce and maintain habitats that benefit the other organisms that use them. An example is the photosynthetic corals of the coral reef (Figure 1). Corals themselves are not photosynthetic, but harbor symbionts within their body tissues (dinoflagellates called zooxanthellae) that perform photosynthesis; this is another example of a mutualism. The exoskeletons of living and dead coral make up most of the reef structure, which protects many other species from waves and ocean currents.

Biodiversity describes a community’s biological complexity: it is measured by the number of different species (species richness) in a particular area and their relative abundance (species evenness). The area in question could be a habitat, a biome, or the entire biosphere. Species richness is the term that is used to describe the number of species living in a habitat or biome. Species richness varies across the globe (Figure 2). One factor in determining species richness is latitude, with the greatest species richness occurring in ecosystems near the equator, which often have warmer temperatures, large amounts of rainfall, and low seasonality. The lowest species richness occurs near the poles, which are much colder, drier, and thus less conducive to life in Geologic time (time since glaciations). The predictability of climate or productivity is also an important factor. Other factors influence species richness as well. For example, the study of island biogeography attempts to explain the relatively high species richness found in certain isolated island chains, including the Galápagos Islands that inspired the young Darwin. Relative species abundance is the number of individuals in a species relative to the total number of individuals in all species within a habitat, ecosystem, or biome. Foundation species often have the highest relative abundance of species. 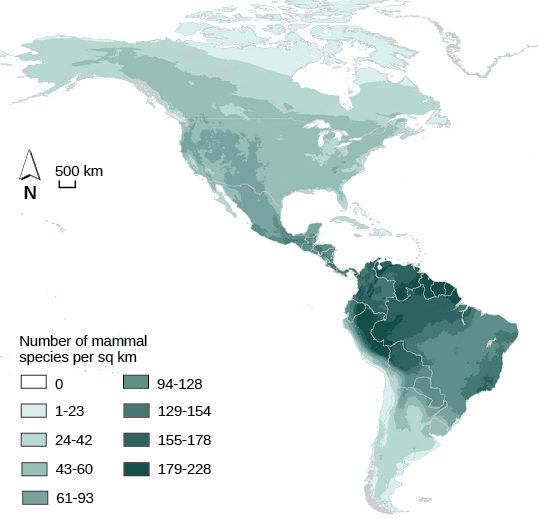 Figure 2. The greatest species richness for mammals in North and South America is associated with the equatorial latitudes. (credit: modification of work by NASA, CIESIN, Columbia University) 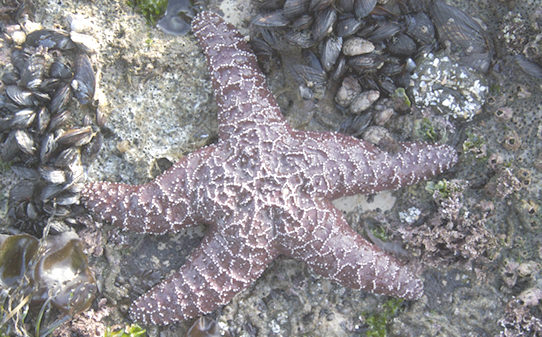 A keystone species is one whose presence is key to maintaining biodiversity within an ecosystem and to upholding an ecological community’s structure. The intertidal sea star, Pisaster ochraceus, of the northwestern United States is a keystone species (Figure 3).

Studies have shown that when this organism is removed from communities, populations of their natural prey (mussels) increase, completely altering the species composition and reducing biodiversity. Another keystone species is the banded tetra, a fish in tropical streams, which supplies nearly all of the phosphorus, a necessary inorganic nutrient, to the rest of the community. If these fish were to become extinct, the community would be greatly affected. 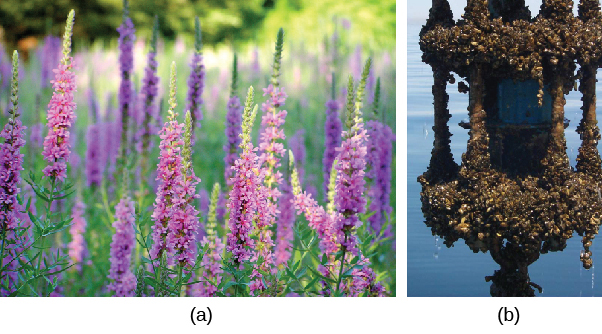 Invasive species are non-native organisms that, when introduced to an area out of their native range, threaten the ecosystem balance of that habitat. Many such species exist in the United States, as shown in Figures 4–6. Whether enjoying a forest hike, taking a summer boat trip, or simply walking down an urban street, you have likely encountered an invasive species.

Community dynamics are the changes in community structure and composition over time. Sometimes these changes are induced by environmental disturbances such as volcanoes, earthquakes, storms, fires, and climate change. Communities with a stable structure are said to be at equilibrium. Following a disturbance, the community may or may not return to the equilibrium state.

Succession describes the sequential appearance and disappearance of species in a community over time. In primary succession, newly exposed or newly formed land is colonized by living things; in secondary succession, part of an ecosystem is disturbed and remnants of the previous community remain. 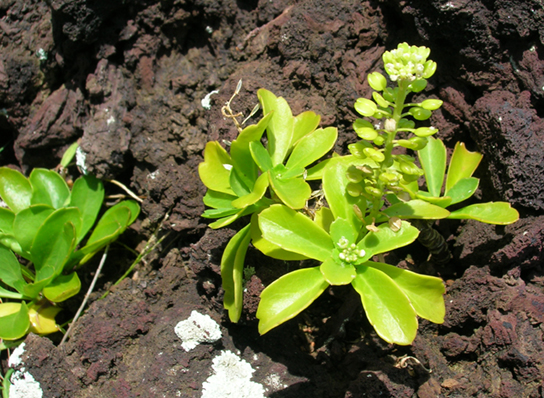 Figure 6. During primary succession in lava on Maui, Hawaii, succulent plants are the pioneer species. (credit: Forest and Kim Starr)

Primary succession occurs when new land is formed or rock is exposed: for example, following the eruption of volcanoes, such as those on the Big Island of Hawaii. As lava flows into the ocean, new land is continually being formed. On the Big Island, approximately 32 acres of land is added each year. First, weathering and other natural forces break down the substrate enough for the establishment of certain hearty plants and lichens with few soil requirements, known as pioneer species (Figure 6). These species help to further break down the mineral rich lava into soil where other, less hardy species will grow and eventually replace the pioneer species. In addition, as these early species grow and die, they add to an ever-growing layer of decomposing organic material and contribute to soil formation. Over time the area will reach an equilibrium state, with a set of organisms quite different from the pioneer species.

A classic example of secondary succession occurs in oak and hickory forests cleared by wildfire (Figure 7). Wildfires will burn most vegetation and kill those animals unable to flee the area. Their nutrients, however, are returned to the ground in the form of ash. Thus, even when areas are devoid of life due to severe fires, the area will soon be ready for new life to take hold.

Before the fire, the vegetation was dominated by tall trees with access to the major plant energy resource: sunlight. Their height gave them access to sunlight while also shading the ground and other low-lying species. After the fire, though, these trees are no longer dominant. Thus, the first plants to grow back are usually annual plants followed within a few years by quickly growing and spreading grasses and other pioneer species. Due to, at least in part, changes in the environment brought on by the growth of the grasses and other species, over many years, shrubs will emerge along with small pine, oak, and hickory trees. These organisms are called intermediate species. Eventually, over 150 years, the forest will reach its equilibrium point where species composition is no longer changing and resembles the community before the fire. This equilibrium state is referred to as the climax community, which will remain stable until the next disturbance.

Figure 7. Secondary succession is shown in an oak and hickory forest after a forest fire.