Despite considerable effort, knowledge of the species that inhabit the planet is limited. A recent estimate suggests that the eukaryote species for which science has names, about 1.5 million species, account for less than 20 percent of the total number of eukaryote species present on the planet (8.7 million species, by one estimate). Estimates of numbers of prokaryotic species are largely guesses, but biologists agree that science has only begun to catalog their diversity. Even with what is known, there is no central repository of names or samples of the described species; therefore, there is no way to be sure that the 1.5 million descriptions is an accurate number. It is a best guess based on the opinions of experts in different taxonomic groups. Given that Earth is losing species at an accelerating pace, science is very much in the place it was with the Lake Victoria cichlids: knowing little about what is being lost. Table 1 presents recent estimates of biodiversity in different groups.

There are various initiatives to catalog described species in accessible ways, and the internet is facilitating that effort. Nevertheless, it has been pointed out that at the current rate of species description, which according to the State of Observed Species Report is 17,000 to 20,000 new species per year, it will take close to 500 years to finish describing life on this planet.[4] Over time, the task becomes both increasingly impossible and increasingly easier as extinction removes species from the planet.

Naming and counting species may seem an unimportant pursuit given the other needs of humanity, but it is not simply an accounting. Describing species is a complex process by which biologists determine an organism’s unique characteristics and whether or not that organism belongs to any other described species. It allows biologists to find and recognize the species after the initial discovery, and allows them to follow up on questions about its biology. In addition, the unique characteristics of each species make it potentially valuable to humans or other species on which humans depend. Understanding these characteristics is the value of finding and naming species.

In 1988, British environmentalist Norman Myers developed a conservation concept to identify areas rich in species and at significant risk for species loss: biodiversity hotspots. Biodiversity hotspots are geographical areas that contain high numbers of endemic species. The purpose of the concept was to identify important locations on the planet for conservation efforts, a kind of conservation triage. By protecting hotspots, governments are able to protect a larger number of species. The original criteria for a hotspot included the presence of 1500 or more endemic plant species and 70 percent of the area disturbed by human activity. There are now 34 biodiversity hotspots (Figure 3) containing large numbers of endemic species, which include half of Earth’s endemic plants. 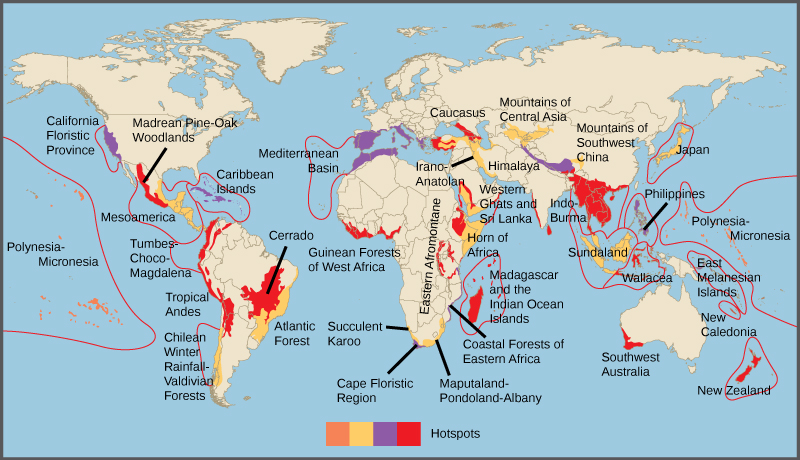 Figure 3. Conservation International has identified 34 biodiversity hotspots, which cover only 2.3 percent of the Earth’s surface but have endemic to them 42 percent of the terrestrial vertebrate species and 50 percent of the world’s plants.

This video takes a look at the growing fields of conservation biology and restoration ecology, which apply ecological principles to protecting ecosystems and to cleaning up the messes that we’ve already made.