The evidence for evolution is compelling and extensive. Looking at every level of organization in living systems, biologists see the signature of past and present evolution. Darwin dedicated a large portion of his book, On the Origin of Species, to identifying patterns in nature that were consistent with evolution, and since Darwin, our understanding has become clearer and broader.

Fossils provide solid evidence that organisms from the past are not the same as those found today, and fossils show a progression of evolution. Scientists determine the age of fossils and categorize them from all over the world to determine when the organisms lived relative to each other. The resulting fossil record tells the story of the past and shows the evolution of form over millions of years (Figure 1a). For example, scientists have recovered highly detailed records showing the evolution of humans and horses (Figure 1b). 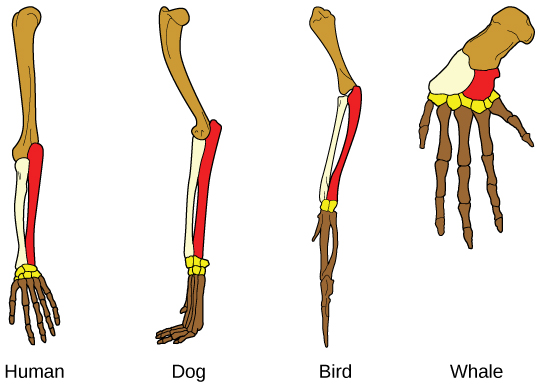 Visit this interactive site to guess which bones structures are homologous and which are analogous. There are also examples of evolutionary adaptations that illustrate these concepts. 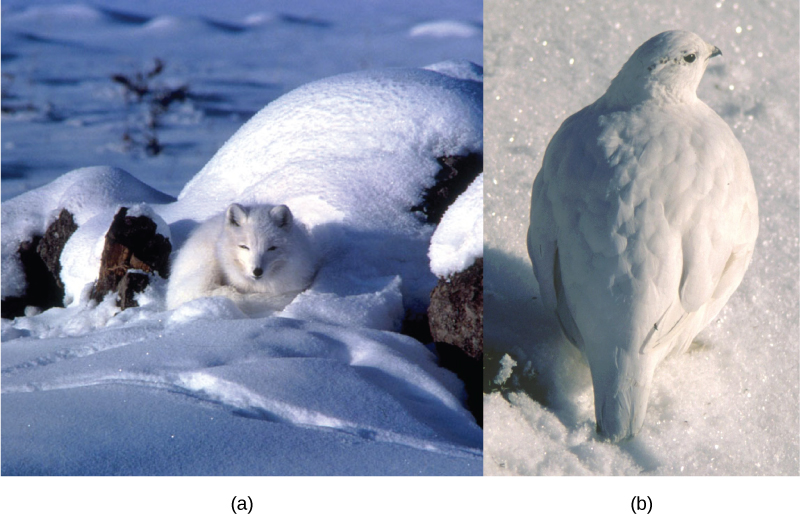 The geographic distribution of organisms on the planet follows patterns that are best explained by evolution in conjunction with the movement of tectonic plates over geological time. Broad groups that evolved before the breakup of the supercontinent Pangaea (about 200 million years ago) are distributed worldwide. Groups that evolved since the breakup appear uniquely in regions of the planet, such as the unique flora and fauna of northern continents that formed from the supercontinent Laurasia and of the southern continents that formed from the supercontinent Gondwana. The presence of members of the plant family Proteaceae in Australia, southern Africa, and South America is best due to their appearance prior to the southern supercontinent Gondwana breaking up.

The great diversification of marsupials in Australia and the absence of other mammals reflect Australia’s long isolation. Australia has an abundance of endemic species—species found nowhere else—which is typical of islands whose isolation by expanses of water prevents species migration. Over time, these species diverge evolutionarily into new species that look very different from their ancestors that may exist on the mainland. The marsupials of Australia, the finches on the Galápagos, and many species on the Hawaiian Islands are all unique to their one point of origin, yet they display distant relationships to ancestral species on mainlands.

Like anatomical structures, the structures of the molecules of life reflect descent with modification. Evidence of a common ancestor for all of life is reflected in the universality of DNA as the genetic material and in the near universality of the genetic code and the machinery of DNA replication and expression. Fundamental divisions in life between the three domains are reflected in major structural differences in otherwise conservative structures such as the components of ribosomes and the structures of membranes. In general, the relatedness of groups of organisms is reflected in the similarity of their DNA sequences—exactly the pattern that would be expected from descent and diversification from a common ancestor.

DNA sequences have also shed light on some of the mechanisms of evolution. For example, it is clear that the evolution of new functions for proteins commonly occurs after gene duplication events that allow the free modification of one copy by mutation, selection, or drift (changes in a population’s gene pool resulting from chance), while the other copy continues to produce a functional protein.

This video defines evolution and discusses several varieties of evidence that support the Theory of Evolution: