Prokaryotes are ubiquitous. They cover every imaginable surface where there is sufficient moisture, and they live on and inside of other living things. In the typical human body, prokaryotic cells outnumber human body cells by about ten to one. They comprise the majority of living things in all ecosystems. Some prokaryotes thrive in environments that are inhospitable for most living things. Prokaryotes recycle nutrients—essential substances (such as carbon and nitrogen)—and they drive the evolution of new ecosystems, some of which are natural and others man-made. Prokaryotes have been on Earth since long before multicellular life appeared.

When and where did life begin? What were the conditions on Earth when life began? Prokaryotes were the first forms of life on Earth, and they existed for billions of years before plants and animals appeared. The Earth and its moon are thought to be about 4.54 billion years old. This estimate is based on evidence from radiometric dating of meteorite material together with other substrate material from Earth and the moon. Early Earth had a very different atmosphere (contained less molecular oxygen) than it does today and was subjected to strong radiation; thus, the first organisms would have flourished where they were more protected, such as in ocean depths or beneath the surface of the Earth. At this time too, strong volcanic activity was common on Earth, so it is likely that these first organisms—the first prokaryotes—were adapted to very high temperatures. Early Earth was prone to geological upheaval and volcanic eruption, and was subject to bombardment by mutagenic radiation from the sun. The first organisms were prokaryotes that could withstand these harsh conditions.

Microbial mats or large biofilms may represent the earliest forms of life on Earth; there is fossil evidence of their presence starting about 3.5 billion years ago. A microbial mat is a multi-layered sheet of prokaryotes (Figure 1) that includes mostly bacteria, but also archaea. Microbial mats are a few centimeters thick, and they typically grow where different types of materials interface, mostly on moist surfaces. The various types of prokaryotes that comprise them carry out different metabolic pathways, and that is the reason for their various colors. Prokaryotes in a microbial mat are held together by a glue-like sticky substance that they secrete called extracellular matrix.

Figure 1. This (a) microbial mat, about one meter in diameter, grows over a hydrothermal vent in the Pacific Ocean in a region known as the “Pacific Ring of Fire.” The mat helps retain microbial nutrients. Chimneys such as the one indicated by the arrow allow gases to escape. (b) In this micrograph, bacteria are visualized using fluorescence microscopy. (credit a: modification of work by Dr. Bob Embley, NOAA PMEL, Chief Scientist; credit b: modification of work by Ricardo Murga, Rodney Donlan, CDC; scale-bar data from Matt Russell)

Fossilized microbial mats represent the earliest record of life on Earth. A stromatolite is a sedimentary structure formed when minerals are precipitated out of water by prokaryotes in a microbial mat (Figure 2). Stromatolites form layered rocks made of carbonate or silicate. Although most stromatolites are artifacts from the past, there are places on Earth where stromatolites are still forming. For example, growing stromatolites have been found in the Anza-Borrego Desert State Park in San Diego County, California. 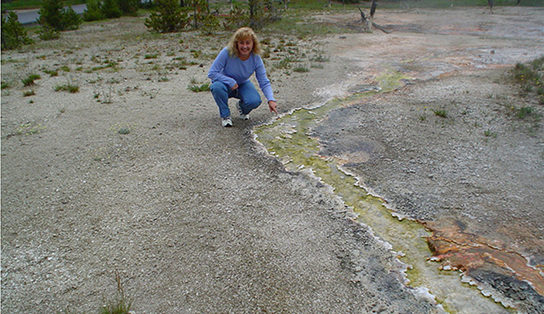 Figure 3. This hot spring in Yellowstone National Park flows toward the foreground. Cyanobacteria in the spring are green, and as water flows down the gradient, the intensity of the color increases as cell density increases. The water is cooler at the edges of the stream than in the center, causing the edges to appear greener. (credit: Graciela Brelles-Mariño)

Evidence indicates that during the first two billion years of Earth’s existence, the atmosphere was anoxic, meaning that there was no molecular oxygen. Therefore, only those organisms that can grow without oxygen—anaerobic organisms—were able to live. Autotrophic organisms that convert solar energy into chemical energy are called phototrophs, and they appeared within one billion years of the formation of Earth. Then, cyanobacteria, also known as blue-green algae, evolved from these simple phototrophs one billion years later. Cyanobacteria (Figure 3) began the oxygenation of the atmosphere. Increased atmospheric oxygen allowed the development of more efficient O2-utilizing catabolic pathways. It also opened up the land to increased colonization, because some O2 is converted into O3 (ozone) and ozone effectively absorbs the ultraviolet light that would otherwise cause lethal mutations in DNA. Ultimately, the increase in O2 concentrations allowed the evolution of other life forms.

Show Answer
Answer d. Microbial mats are all of the above.

The first organisms that oxygenated the atmosphere were

Show Answer
Answer a. The first organisms that oxygenated the atmosphere were cyanobacteria.