There are records about infectious diseases as far back as 3000 B.C. A number of significant pandemics caused by bacteria have been documented over several hundred years. Some of the most memorable pandemics led to the decline of cities and nations.

In the twenty-first century, infectious diseases remain among the leading causes of death worldwide, despite advances made in medical research and treatments in recent decades. A disease spreads when the pathogen that causes it is passed from one person to another. For a pathogen to cause disease, it must be able to reproduce in the host’s body and damage the host in some way.

The Plague of Athens 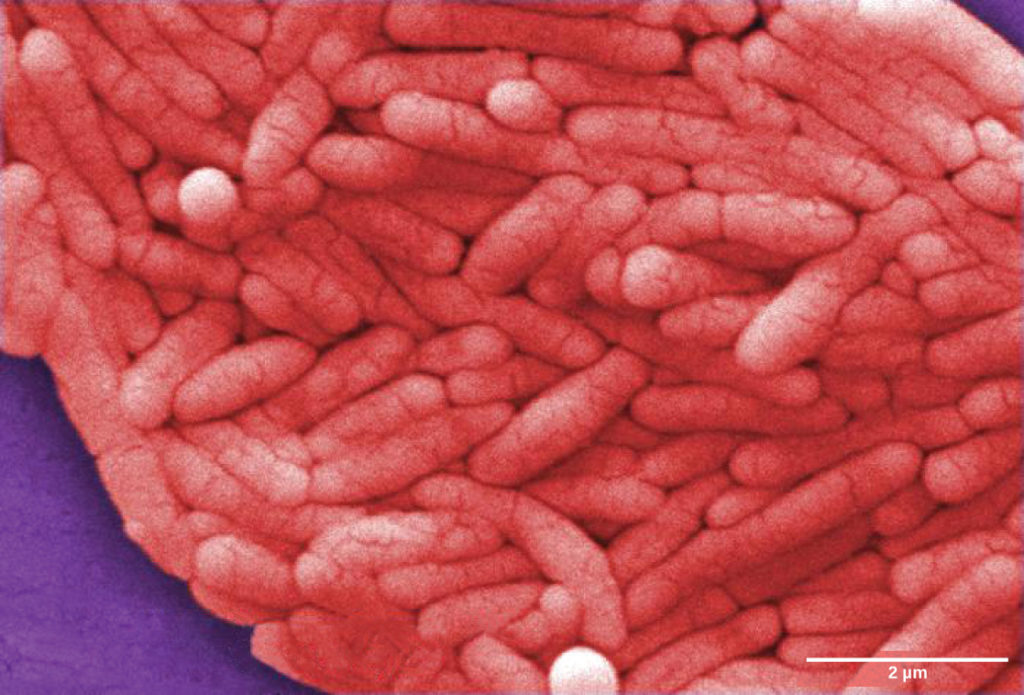 In 430 B.C., the Plague of Athens killed one-quarter of the Athenian troops that were fighting in the great Peloponnesian War and weakened Athens’ dominance and power. The plague impacted people living in overcrowded Athens as well as troops aboard ships that had to return to Athens. The source of the plague may have been identified recently when researchers from the University of Athens were able to use DNA from teeth recovered from a mass grave. The scientists identified nucleotide sequences from a pathogenic bacterium, Salmonella enterica serovar Typhi (Figure 1), which causes typhoid fever.[1] This disease is commonly seen in overcrowded areas and has caused epidemics throughout recorded history.

Salmonella enterica serovar Typhi, the causative agent of typhoid fever, is a Gram-negative, rod-shaped gamma protobacterium. Typhoid fever, which is spread through feces, causes intestinal hemorrhage, high fever, delirium and dehydration. Today, between 16 and 33 million cases of this re-emerging disease occur annually, resulting in over 200,000 deaths. Carriers of the disease can be asymptomatic. In a famous case in the early 1900s, a cook named Mary Mallon unknowingly spread the disease to over fifty people, three of whom died. Other Salmonella serotypes cause food poisoning.

From 541 to 750, an outbreak of what was likely a bubonic plague (the Plague of Justinian), eliminated one-quarter to one-half of the human population in the eastern Mediterranean region. The population in Europe dropped by 50 percent during this outbreak. Bubonic plague would strike Europe more than once.

One of the most devastating pandemics was the Black Death (1346 to 1361) that is believed to have been another outbreak of bubonic plague caused by the bacterium Yersinia pestis. It is thought to have originated initially in China and spread along the Silk Road, a network of land and sea trade routes, to the Mediterranean region and Europe, carried by rat fleas living on black rats that were always present on ships. The Black Death reduced the world’s population from an estimated 450 million to about 350 to 375 million. Bubonic plague struck London hard again in the mid-1600s (Figure 2). In modern times, approximately 1,000 to 3,000 cases of plague arise globally each year. Although contracting bubonic plague before antibiotics meant almost certain death, the bacterium responds to several types of modern antibiotics, and mortality rates from plague are now very low.

Figure 2. The (a) Great Plague of London killed an estimated 200,000 people, or about twenty percent of the city’s population. The causative agent, the (b) bacterium Yersinia pestis, is a Gram-negative, rod-shaped bacterium from the class Gamma Proteobacteria. The disease is transmitted through the bite of an infected flea, which is infected by a rodent. Symptoms include swollen lymph nodes, fever, seizure, vomiting of blood, and (c) gangrene. (credit b: Rocky Mountain Laboratories, NIAID, NIH; scale-bar data from Matt Russell; credit c: Textbook of Military Medicine, Washington, D.C., U.S. Dept. of the Army, Office of the Surgeon General, Borden Institute)

Watch a video on the modern understanding of the Black Death—bubonic plague in Europe during the fourteenth century.

Migration of Diseases to New Populations

Over the centuries, Europeans tended to develop genetic immunity to endemic infectious diseases, but when European conquerors reached the western hemisphere, they brought with them disease-causing bacteria and viruses, which triggered epidemics that completely devastated populations of Native Americans, who had no natural resistance to many European diseases. It has been estimated that up to 90 percent of Native Americans died from infectious diseases after the arrival of Europeans, making conquest of the New World a foregone conclusion.

The distribution of a particular disease is dynamic. Therefore, changes in the environment, the pathogen, or the host population can dramatically impact the spread of a disease. According to the World Health Organization (WHO) an emerging disease (Figure 3) is one that has appeared in a population for the first time, or that may have existed previously but is rapidly increasing in incidence or geographic range. This definition also includes re-emerging diseases that were previously under control. Approximately 75 percent of recently emerging infectious diseases affecting humans are zoonotic diseases (zoonoses), or diseases that primarily infect animals and are transmitted to humans; some are of viral origin and some are of bacterial origin. Brucellosis is an example of a prokaryotic zoonosis that is re-emerging in some regions, and necrotizing fasciitis (commonly known as flesh-eating bacteria) has been increasing in virulence for the last 80 years for unknown reasons. 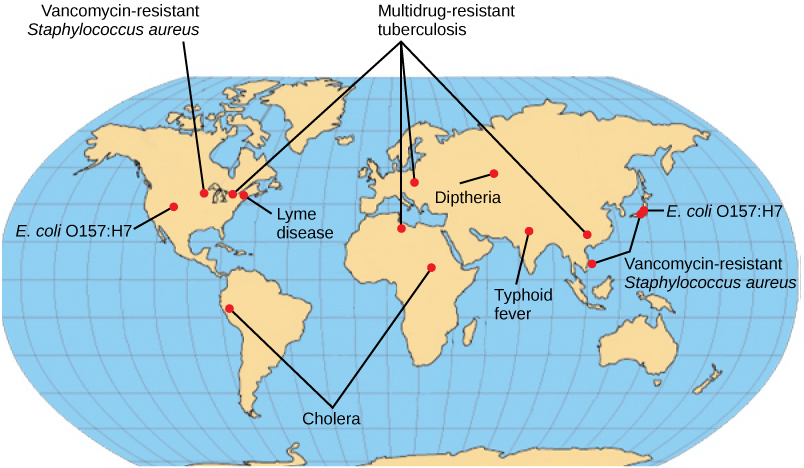 Figure 3. The map shows regions where bacterial diseases are emerging or reemerging. (credit: modification of work by NIH)

Some of the present emerging diseases are not actually new, but are diseases that were catastrophic in the past (Figure 4). They devastated populations and became dormant for a while, just to come back, sometimes more virulent than before, as was the case with bubonic plague. Other diseases, like tuberculosis, were never eradicated but were under control in some regions of the world until coming back, mostly in urban centers with high concentrations of immunocompromised people. The WHO has identified certain diseases whose worldwide re-emergence should be monitored. Among these are two viral diseases (dengue fever and yellow fever), and three bacterial diseases (diphtheria, cholera, and bubonic plague). The war against infectious diseases has no foreseeable end.

Figure 4. Lyme disease often, but not always, results in (a) a characteristic bullseye rash. The disease is caused by a (b) Gram-negative spirochete bacterium of the genus Borrelia. The bacteria (c) infect ticks, which in turns infect mice. Deer are the preferred secondary host, but the ticks also may feed on humans. Untreated, the disease causes chronic disorders in the nervous system, eyes, joints, and heart. The disease is named after Lyme, Connecticut, where an outbreak occurred in 1995 and has subsequently spread. The disease is not new, however. Genetic evidence suggests that Ötzi the Iceman, a 5,300-year-old mummy found in the Alps, was infected with Borrelia. (credit a: James Gathany, CDC; credit b: CDC; scale-bar data from Matt Russell)