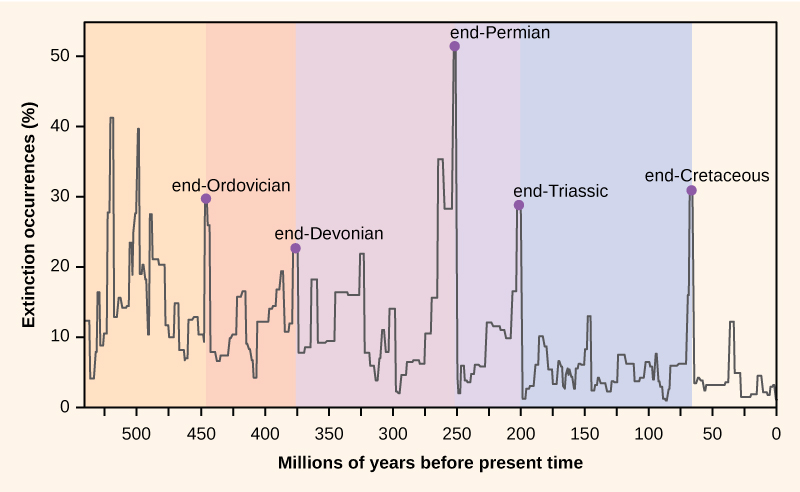 Paleontologists have identified five strata in the fossil record that appear to show sudden and dramatic (greater than half of all extant species disappearing from the fossil record) losses in biodiversity. These are called mass extinctions. There are many lesser, yet still dramatic, extinction events, but the five mass extinctions have attracted the most research. An argument can be made that the five mass extinctions are only the five most extreme events in a continuous series of large extinction events throughout the Phanerozoic (since 542 million years ago). In most cases, the hypothesized causes are still controversial; however, the most recent event seems clear.

The fossil record of the mass extinctions was the basis for defining periods of geological history, so they typically occur at the transition point between geological periods. The transition in fossils from one period to another reflects the dramatic loss of species and the gradual origin of new species. These transitions can be seen in the rock strata. Table 1 provides data on the five mass extinctions.

The Ordovician-Silurian extinction event is the first recorded mass extinction and the second largest. During this period, about 85 percent of marine species (few species lived outside the oceans) became extinct. The main hypothesis for its cause is a period of glaciation and then warming. The extinction event actually consists of two extinction events separated by about 1 million years. The first event was caused by cooling, and the second event was due to the subsequent warming. The climate changes affected temperatures and sea levels. Some researchers have suggested that a gamma-ray burst, caused by a nearby supernova, is a possible cause of the Ordovician-Silurian extinction. The gamma-ray burst would have stripped away the Earth’s ozone layer causing intense ultraviolet radiation from the sun and may account for climate changes observed at the time. The hypothesis is speculative, but extraterrestrial influences on Earth’s history are an active line of research. Recovery of biodiversity after the mass extinction took from 5 to 20 million years, depending on the location.

The late Devonian extinction may have occurred over a relatively long period of time. It appears to have affected marine species and not the plants or animals inhabiting terrestrial habitats. The causes of this extinction are poorly understood.

The end-Permian extinction was the largest in the history of life. Indeed, an argument could be made that Earth nearly became devoid of life during this extinction event. The planet looked very different before and after this event. Estimates are that 96 percent of all marine species and 70 percent of all terrestrial species were lost. It was at this time, for example, that the trilobites, a group that survived the Ordovician–Silurian extinction, became extinct. The causes for this mass extinction are not clear, but the leading suspect is extended and widespread volcanic activity that led to a runaway global-warming event. The oceans became largely anoxic, suffocating marine life. Terrestrial tetrapod diversity took 30 million years to recover after the end-Permian extinction. The Permian extinction dramatically altered Earth’s biodiversity makeup and the course of evolution.

The causes of the Triassic–Jurassic extinction event are not clear and hypotheses of climate change, asteroid impact, and volcanic eruptions have been argued. The extinction event occurred just before the breakup of the supercontinent Pangaea, although recent scholarship suggests that the extinctions may have occurred more gradually throughout the Triassic.

The causes of the end-Cretaceous extinction event are the ones that are best understood. It was during this extinction event about 65 million years ago that the dinosaurs, the dominant vertebrate group for millions of years, disappeared from the planet (with the exception of a theropod clade that gave rise to birds). Indeed, every land animal that weighed more then 25 kg became extinct. The cause of this extinction is now understood to be the result of a cataclysmic impact of a large meteorite, or asteroid, off the coast of what is now the Yucatán Peninsula. This hypothesis, proposed first in 1980, was a radical explanation based on a sharp spike in the levels of iridium (which rains down from space in meteors at a fairly constant rate but is otherwise absent on Earth’s surface) at the rock stratum that marks the boundary between the Cretaceous and Paleogene periods (Figure 2). This boundary marked the disappearance of the dinosaurs in fossils as well as many other taxa. The researchers who discovered the iridium spike interpreted it as a rapid influx of iridium from space to the atmosphere (in the form of a large asteroid) rather than a slowing in the deposition of sediments during that period. It was a radical explanation, but the report of an appropriately aged and sized impact crater in 1991 made the hypothesis more believable. Now an abundance of geological evidence supports the theory. Recovery times for biodiversity after the end-Cretaceous extinction are shorter, in geological time, than for the end-Permian extinction, on the order of 10 million years. 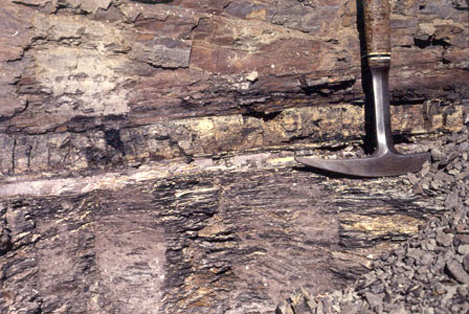 In 1980, Luis and Walter Alvarez, Frank Asaro, and Helen Michels discovered, across the world, a spike in the concentration of iridium within the sedimentary layer at the K–Pg boundary. These researchers hypothesized that this iridium spike was caused by an asteroid impact that resulted in the K–Pg mass extinction. In Figure 2, the iridium layer is the light band.

Scientists measured the relative abundance of fern spores above and below the K–Pg boundary in this rock sample. Which of the following statements most likely represents their findings?

Show Answer
Answer a: An abundance of fern spores from several species was found below the K-Pg boundary, but none was found above.
Explore this interactive website about mass extinctions.

The Pleistocene Extinction is one of the lesser extinctions, and a recent one. It is well known that the North American, and to some degree Eurasian, megafauna, or large animals, disappeared toward the end of the last glaciation period. The extinction appears to have happened in a relatively restricted time period of 10,000–12,000 years ago. In North America, the losses were quite dramatic and included the woolly mammoths (last dated about 4,000 years ago in an isolated population), mastodon, giant beavers, giant ground sloths, saber-toothed cats, and the North American camel, just to name a few. The possibility that the rapid extinction of these large animals was caused by over-hunting was first suggested in the 1900s. Research into this hypothesis continues today. It seems likely that over-hunting caused many pre-written history extinctions in many regions of the world.

In general, the timing of the Pleistocene extinctions correlated with the arrival of humans and not with climate-change events, which is the main competing hypothesis for these extinctions. The extinctions began in Australia about 40,000 to 50,000 years ago, just after the arrival of humans in the area: a marsupial lion, a giant one-ton wombat, and several giant kangaroo species disappeared. In North America, the extinctions of almost all of the large mammals occurred 10,000–12,000 years ago. All that are left are the smaller mammals such as bears, elk, moose, and cougars. Finally, on many remote oceanic islands, the extinctions of many species occurred coincident with human arrivals. Not all of the islands had large animals, but when there were large animals, they were lost. Madagascar was colonized about 2,000 years ago and the large mammals that lived there became extinct. Eurasia and Africa do not show this pattern, but they also did not experience a recent arrival of humans. Humans arrived in Eurasia hundreds of thousands of years ago after the origin of the species in Africa. This topic remains an area of active research and hypothesizing. It seems clear that even if climate played a role, in most cases human hunting precipitated the extinctions.

The sixth, or Holocene, mass extinction appears to have begun earlier than previously believed and has mostly to do with the activities of Homo sapiens. Since the beginning of the Holocene period, there are numerous recent extinctions of individual species that are recorded in human writings. Most of these are coincident with the expansion of the European colonies since the 1500s.

One of the earlier and popularly known examples is the dodo bird. The dodo bird lived in the forests of Mauritius, an island in the Indian Ocean. The dodo bird became extinct around 1662. It was hunted for its meat by sailors and was easy prey because the dodo, which did not evolve with humans, would approach people without fear. Introduced pigs, rats, and dogs brought to the island by European ships also killed dodo young and eggs.

Steller’s sea cow became extinct in 1768; it was related to the manatee and probably once lived along the northwest coast of North America. Steller’s sea cow was first discovered by Europeans in 1741 and was hunted for meat and oil. The last sea cow was killed in 1768. That amounts to 27 years between the sea cow’s first contact with Europeans and extinction of the species.

In 1914, the last living passenger pigeon died in a zoo in Cincinnati, Ohio. This species had once darkened the skies of North America during its migrations, but it was hunted and suffered from habitat loss through the clearing of forests for farmland. In 1918, the last living Carolina parakeet died in captivity. This species was once common in the eastern United States, but it suffered from habitat loss. The species was also hunted because it ate orchard fruit when its native foods were destroyed to make way for farmland. The Japanese sea lion, which inhabited a broad area around Japan and the coast of Korea, became extinct in the 1950s due to fishermen. The Caribbean monk seal was distributed throughout the Caribbean Sea but was driven to extinction via hunting by 1952.

These are only a few of the recorded extinctions in the past 500 years. The International Union for Conservation of Nature (IUCN) keeps a list of extinct and endangered species called the Red List. The list is not complete, but it describes 380 extinct species of vertebrates after 1500 AD, 86 of which were driven extinct by overhunting or overfishing.

Estimates of extinction rates are hampered by the fact that most extinctions are probably happening without observation. The extinction of a bird or mammal is likely to be noticed by humans, especially if it has been hunted or used in some other way. But there are many organisms that are of less interest to humans (not necessarily of less value) and many that are undescribed.

One contemporary extinction rate estimate uses the extinctions in the written record since the year 1500. For birds alone this method yields an estimate of 26 E/MSY. However, this value may be underestimated for three reasons. First, many species would not have been described until much later in the time period, so their loss would have gone unnoticed. Second, the number of recently extinct species is increasing because extinct species now are being described from skeletal remains. And third, some species are probably already extinct even though conservationists are reluctant to name them as such. Taking these factors into account raises the estimated extinction rate closer to 100 E/MSY. The predicted rate by the end of the century is 1500 E/MSY. 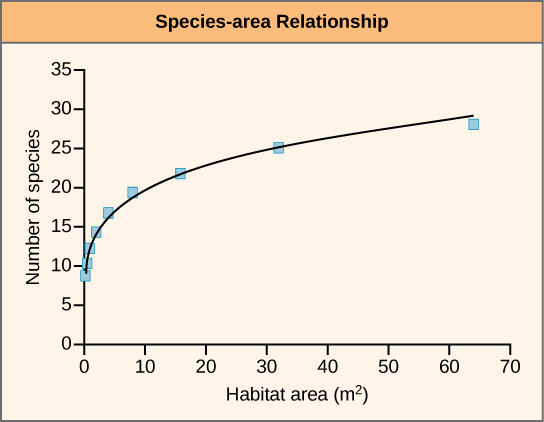 Figure 3. Studies have shown that the number of species present increases with the size of the habitat. (credit: modification of work by Adam B. Smith)

Check out this interactive exploration of endangered and extinct species, their ecosystems, and the causes of the endangerment or extinction.