Perspectives on the Phylogenetic Tree

The concepts of phylogenetic modeling are constantly changing. It is one of the most dynamic fields of study in all of biology. Over the last several decades, new research has challenged scientists’ ideas about how organisms are related. New models of these relationships have been proposed for consideration by the scientific community.

Many phylogenetic trees have been shown as models of the evolutionary relationship among species. Phylogenetic trees originated with Charles Darwin, who sketched the first phylogenetic tree in 1837 (Figure 1a), which served as a pattern for subsequent studies for more than a century. The concept of a phylogenetic tree with a single trunk representing a common ancestor, with the branches representing the divergence of species from this ancestor, fits well with the structure of many common trees, such as the oak (Figure 1b). However, evidence from modern DNA sequence analysis and newly developed computer algorithms has caused skepticism about the validity of the standard tree model in the scientific community. 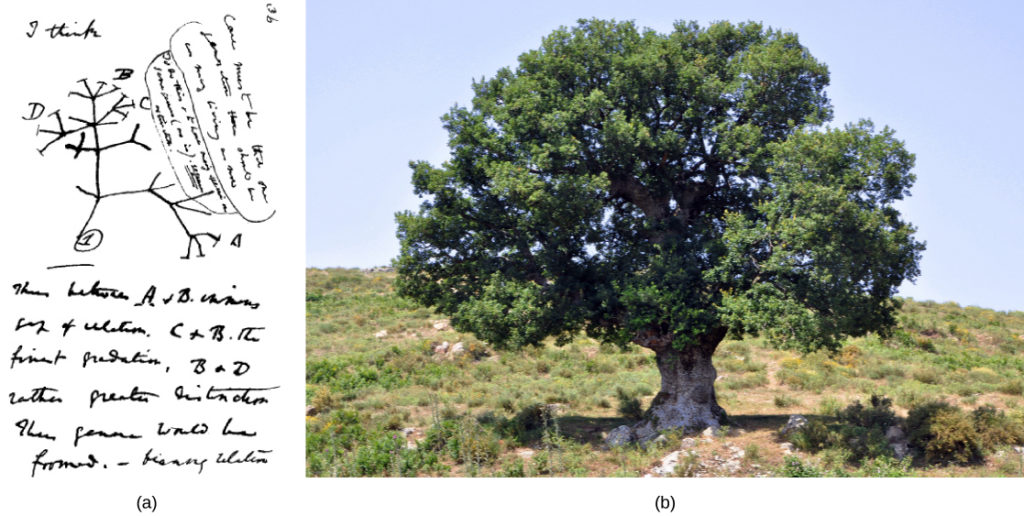 Figure 1. The (a) concept of the “tree of life” goes back to an 1837 sketch by Charles Darwin. Like an (b) oak tree, the “tree of life” has a single trunk and many branches. (credit b: modification of work by “Amada44″/Wikimedia Commons)

Limitations to the Classic Model

Classical thinking about prokaryotic evolution, included in the classic tree model, is that species evolve clonally. That is, they produce offspring themselves with only random mutations causing the descent into the variety of modern-day and extinct species known to science. This view is somewhat complicated in eukaryotes that reproduce sexually, but the laws of Mendelian genetics explain the variation in offspring, again, to be a result of a mutation within the species. The concept of genes being transferred between unrelated species was not considered as a possibility until relatively recently. Horizontal gene transfer (HGT), also known as lateral gene transfer, is the transfer of genes between unrelated species. HGT has been shown to be an ever-present phenomenon, with many evolutionists postulating a major role for this process in evolution, thus complicating the simple tree model. Genes have been shown to be passed between species which are only distantly related using standard phylogeny, thus adding a layer of complexity to the understanding of phylogenetic relationships.

The various ways that HGT occurs in prokaryotes is important to understanding phylogenies. Although at present HGT is not viewed as important to eukaryotic evolution, HGT does occur in this domain as well. Finally, as an example of the ultimate gene transfer, theories of genome fusion between symbiotic or endosymbiotic organisms have been proposed to explain an event of great importance—the evolution of the first eukaryotic cell, without which humans could not have come into existence.

Horizontal gene transfer (HGT) is the introduction of genetic material from one species to another species by mechanisms other than the vertical transmission from parent(s) to offspring. These transfers allow even distantly related species to share genes, influencing their phenotypes. It is thought that HGT is more prevalent in prokaryotes, but that only about 2% of the prokaryotic genome may be transferred by this process. Some researchers believe such estimates are premature: the actual importance of HGT to evolutionary processes must be viewed as a work in progress. As the phenomenon is investigated more thoroughly, it may be revealed to be more common. Many scientists believe that HGT and mutation appear to be (especially in prokaryotes) a significant source of genetic variation, which is the raw material for the process of natural selection. These transfers may occur between any two species that share an intimate relationship (Table 1).

Genome Fusion and the Evolution of Eukaryotes

Scientists believe the ultimate in HGT occurs through genome fusion between different species of prokaryotes when two symbiotic organisms become endosymbiotic. This occurs when one species is taken inside the cytoplasm of another species, which ultimately results in a genome consisting of genes from both the endosymbiont and the host. This mechanism is an aspect of the Endosymbiont Theory, which is accepted by a majority of biologists as the mechanism whereby eukaryotic cells obtained their mitochondria and chloroplasts. However, the role of endosymbiosis in the development of the nucleus is more controversial. Nuclear and mitochondrial DNA are thought to be of different (separate) evolutionary origin, with the mitochondrial DNA being derived from the circular genomes of bacteria that were engulfed by ancient prokaryotic cells. 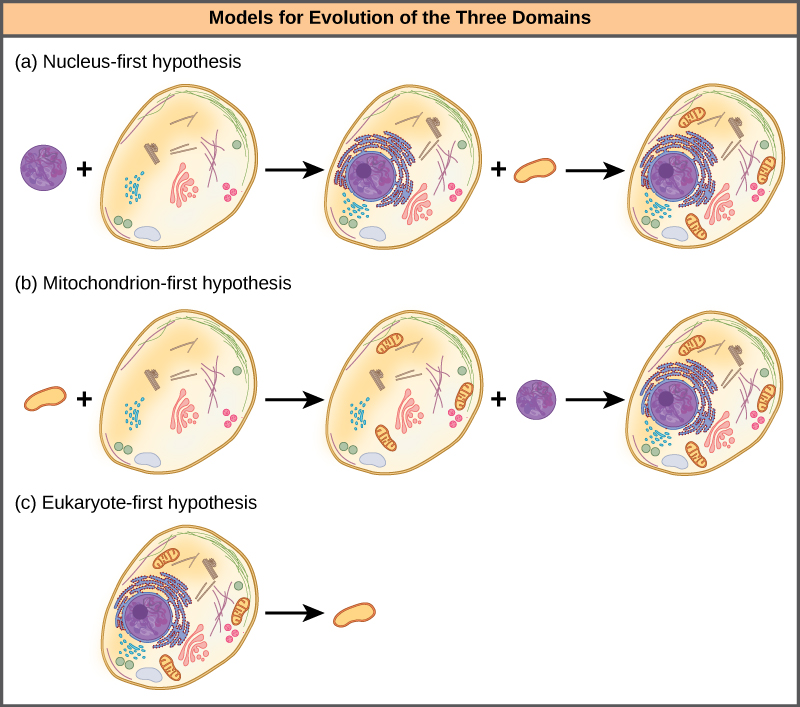 The recognition of the importance of HGT, especially in the evolution of prokaryotes, has caused some to propose abandoning the classic “tree of life” model. In 1999, W. Ford Doolittle proposed a phylogenetic model that resembles a web or a network more than a tree. The hypothesis is that eukaryotes evolved not from a single prokaryotic ancestor, but from a pool of many species that were sharing genes by HGT mechanisms. As shown in Figure 3a, some individual prokaryotes were responsible for transferring the bacteria that caused mitochondrial development to the new eukaryotes, whereas other species transferred the bacteria that gave rise to chloroplasts. This model is often called the “web of life.” In an effort to save the tree analogy, some have proposed using the Ficus tree (Figure 3b) with its multiple trunks as a phylogenetic to represent a diminished evolutionary role for HGT. 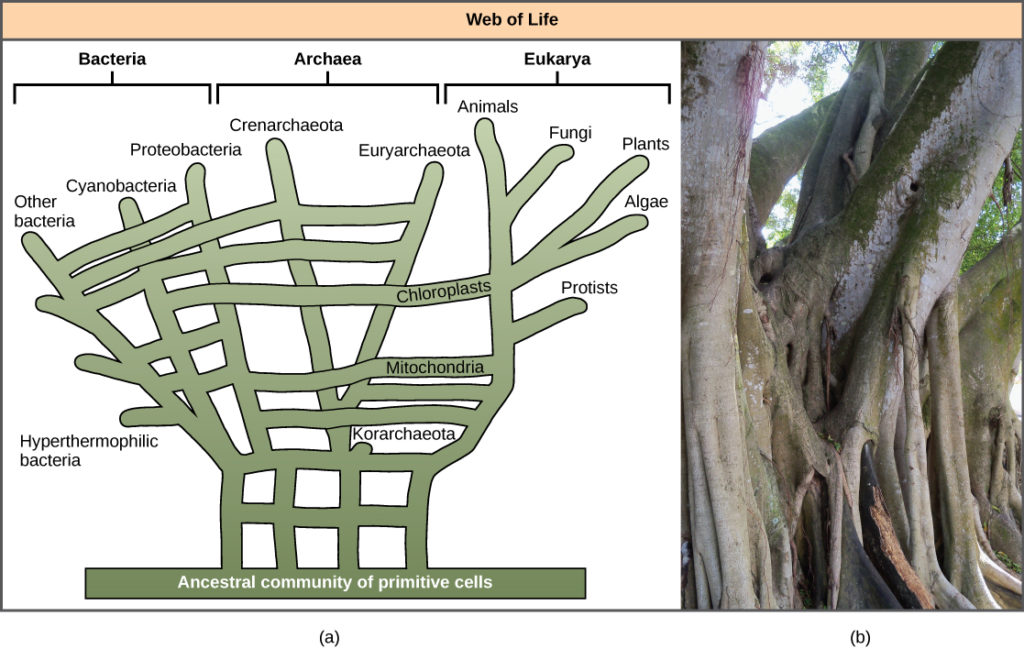 Figure 3. In the (a) phylogenetic model proposed by W. Ford Doolittle, the “tree of life” arose from a community of ancestral cells, has multiple trunks, and has connections between branches where horizontal gene transfer has occurred. Visually, this concept is better represented by (b) the multi-trunked Ficus than by the single trunk of the oak similar to the tree drawn by Darwin Figure 1. (credit b: modification of work by “psyberartist”/Flickr) 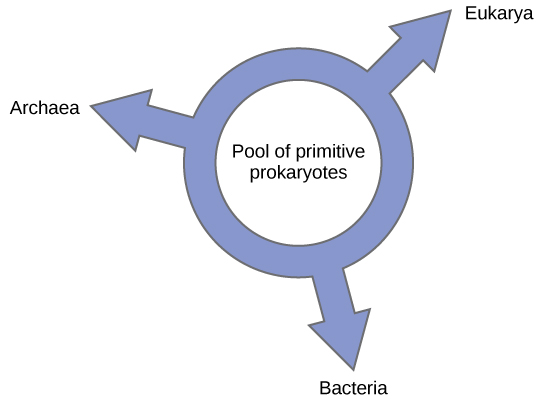 Figure 4. According to the “ring of life” phylogenetic model, the three domains of life evolved from a pool of primitive prokaryotes.

Others have proposed abandoning any tree-like model of phylogeny in favor of a ring structure, the so-called “ring of life” (Figure 4); a phylogenetic model where all three domains of life evolved from a pool of primitive prokaryotes. Lake, again using the conditioned reconstruction algorithm, proposes a ring-like model in which species of all three domains—Archaea, Bacteria, and Eukarya—evolved from a single pool of gene-swapping prokaryotes. His laboratory proposes that this structure is the best fit for data from extensive DNA analyses performed in his laboratory, and that the ring model is the only one that adequately takes HGT and genomic fusion into account. However, other phylogeneticists remain highly skeptical of this model.

In summary, the “tree of life” model proposed by Darwin must be modified to include HGT. Does this mean abandoning the tree model completely? Even Lake argues that all attempts should be made to discover some modification of the tree model to allow it to accurately fit his data, and only the inability to do so will sway people toward his ring proposal.

This doesn’t mean a tree, web, or a ring will correlate completely to an accurate description of phylogenetic relationships of life. A consequence of the new thinking about phylogenetic models is the idea that Darwin’s original conception of the phylogenetic tree is too simple, but made sense based on what was known at the time. However, the search for a more useful model moves on: each model serving as hypotheses to be tested with the possibility of developing new models. This is how science advances. These models are used as visualizations to help construct hypothetical evolutionary relationships and understand the massive amount of data being analyzed.

In Summary: Perspectives on the Phylogenetic Tree

The phylogenetic tree, first used by Darwin, is the classic “tree of life” model describing phylogenetic relationships among species, and the most common model used today. New ideas about HGT and genome fusion have caused some to suggest revising the model to resemble webs or rings.