The flatworms are acoelomate organisms that include many free-living and parasitic forms. Most of the flatworms are classified in the superphylum Lophotrochozoa, which also includes the mollusks and annelids. The Platyhelminthes consist of two lineages: the Catenulida and the Rhabditophora. The Catenulida, or “chain worms” is a small clade of just over 100 species. These worms typically reproduce asexually by budding. However, the offspring do not fully detach from the parents and therefore resemble a chain in appearance. All of the remaining flatworms discussed here are part of the Rhabditophora. Many flatworms are parasitic, including important parasites of humans. Flatworms have three embryonic tissue layers that give rise to surfaces that cover tissues (from ectoderm), internal tissues (from mesoderm), and line the digestive system (from endoderm). The epidermal tissue is a single layer cells or a layer of fused cells (syncytium) that covers a layer of circular muscle above a layer of longitudinal muscle. The mesodermal tissues include mesenchymal cells that contain collagen and support secretory cells that secrete mucus and other materials at the surface. The flatworms are acoelomates, so their bodies are solid between the outer surface and the cavity of the digestive system.

The free-living species of flatworms are predators or scavengers. Parasitic forms feed on the tissues of their hosts. Most flatworms, such as the planarian shown in Figure 1, have a gastrovascular cavity rather than a complete digestive system. In such animals, the “mouth” is also used to expel waste materials from the digestive system. Some species also have an anal opening. The gut may be a simple sac or highly branched. Digestion is extracellular, with digested materials taken in to the cells of the gut lining by phagocytosis. One group, the cestodes, lacks a digestive system. Flatworms have an excretory system with a network of tubules throughout the body with openings to the environment and nearby flame cells, whose cilia beat to direct waste fluids concentrated in the tubules out of the body. The system is responsible for the regulation of dissolved salts and the excretion of nitrogenous wastes. The nervous system consists of a pair of nerve cords running the length of the body with connections between them and a large ganglion or concentration of nerves at the anterior end of the worm, where there may also be a concentration of photosensory and chemosensory cells. 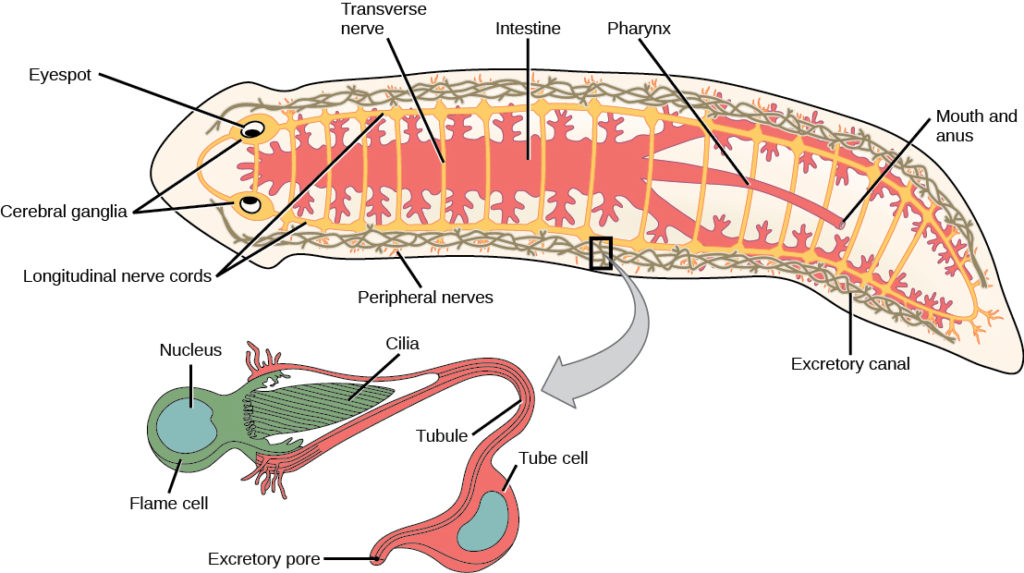 Figure 1. The planarian is a flatworm that has a gastrovascular cavity with one opening that serves as both mouth and anus. The excretory system is made up of tubules connected to excretory pores on both sides of the body. The nervous system is composed of two interconnected nerve cords running the length of the body, with cerebral ganglia and eyespots at the anterior end.

There is neither a circulatory nor respiratory system, with gas and nutrient exchange dependent on diffusion and cell-cell junctions. This necessarily limits the thickness of the body in these organisms, constraining them to be “flat” worms.

Most flatworm species are monoecious, and fertilization is typically internal. Asexual reproduction is common in some groups.

Platyhelminthes are traditionally divided into four classes: Turbellaria, Monogenea, Trematoda, and Cestoda (Figure 2). As discussed above, the relationships among members of these classes is being reassessed, with the turbellarians in particular now viewed as a paraphyletic group, a group that does not have a single common ancestor. 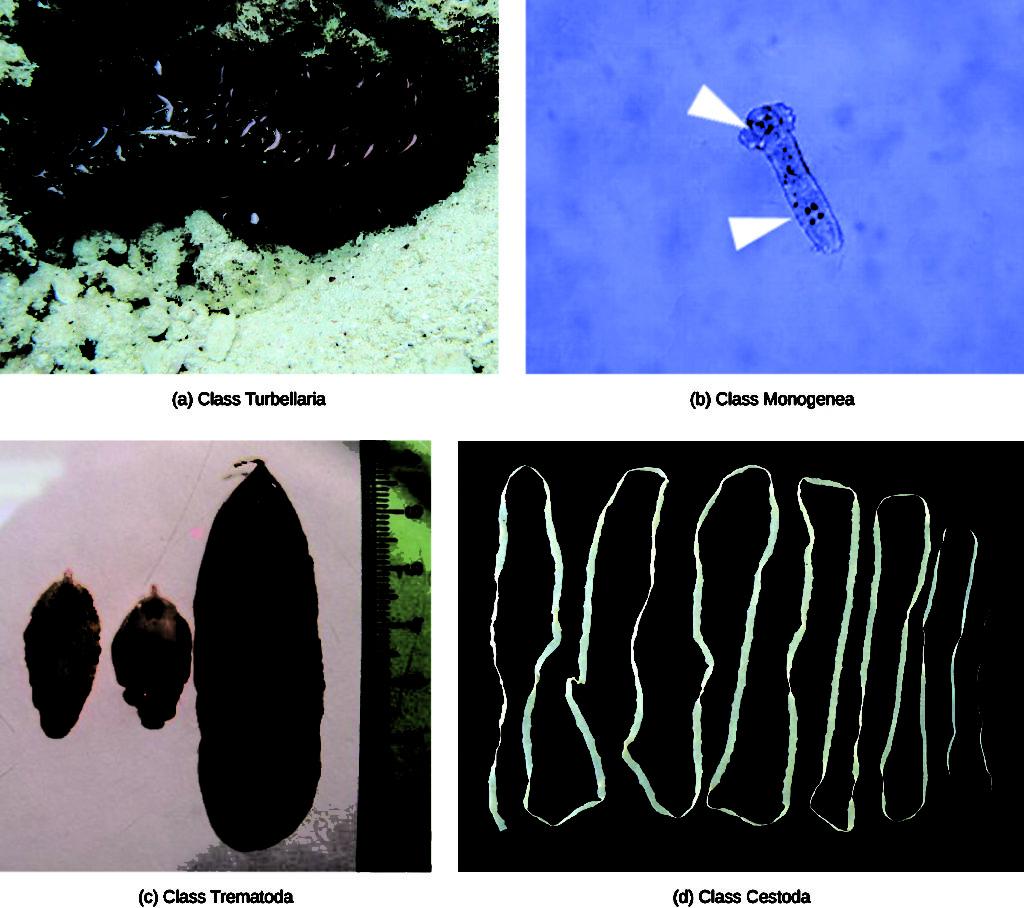 Figure 2. Phylum Platyhelminthes is divided into four classes. (a) Class Turbellaria includes the Bedford’s flatworm (Pseudobiceros bedfordi), which is about 8–10 cm in length. (b) The parasitic class Monogenea includes Dactylogyrus spp. Dactylogyrus, commonly called a gill fluke, is about 0.2 mm in length and has two anchors, indicated by arrows, that it uses to latch onto the gills of host fish. (c) The Trematoda class includes Fascioloides magna (right) and Fasciaola hepatica (two specimens of left, also known as the common liver fluke). (d) Class Cestoda includes tapeworms such as this Taenia saginata. T. saginata, which infects both cattle and humans, can reach 4–10 meters in length; the specimen shown here is about 4 meters. (credit a: modification of work by Jan Derk; credit d: modification of work by CDC)

The class Turbellaria includes mainly free-living, marine species, although some species live in freshwater or moist terrestrial environments. The ventral epidermis of turbellarians is ciliated and facilitates their locomotion. Some turbellarians are capable of remarkable feats of regeneration in which they may regrow the body, even from a small fragment.

The monogeneans are ectoparasites, mostly of fish, with simple lifecycles that consist of a free-swimming larva that attaches to a fish to begin transformation to the parasitic adult form. The parasite has only one host and that host is usually only one species. The worms may produce enzymes that digest the host tissues or simply graze on surface mucus and skin particles. Most monogeneans are hermaphroditic, but the male gametes develop first and so cross-fertilization is quite common.

The trematodes, or flukes, are internal parasites of mollusks and many other groups, including humans. Trematodes have complex lifecycles that involve a primary host in which sexual reproduction occurs, and one or more secondary hosts in which asexual reproduction occurs. The primary host is almost always a mollusk. Trematodes are responsible for serious human diseases including schistosomiasis, a blood fluke. The disease infects an estimated 200 million people in the tropics, leading to organ damage and chronic symptoms like fatigue. Infection occurs when the human enters the water and a larva, released from the primary snail host, locates and penetrates the skin. The parasite infects various organs in the body and feeds on red blood cells before reproducing. Many of the eggs are released in feces and find their way into a waterway, where they are able to reinfect the primary snail host.

The cestodes, or tapeworms, are also internal parasites, mainly of vertebrates (Figure 3). Tapeworms live in the intestinal tract of the primary host and remain fixed using a sucker on the anterior end, or scolex, of the tapeworm body. The remaining body of the tapeworm is made up of a long series of units called proglottids, each of which may contain an excretory system with flame cells, but contain reproductive structures, both male and female. Tapeworms do not possess a digestive system; instead, they absorb nutrients from the food matter passing them in the host’s intestine. 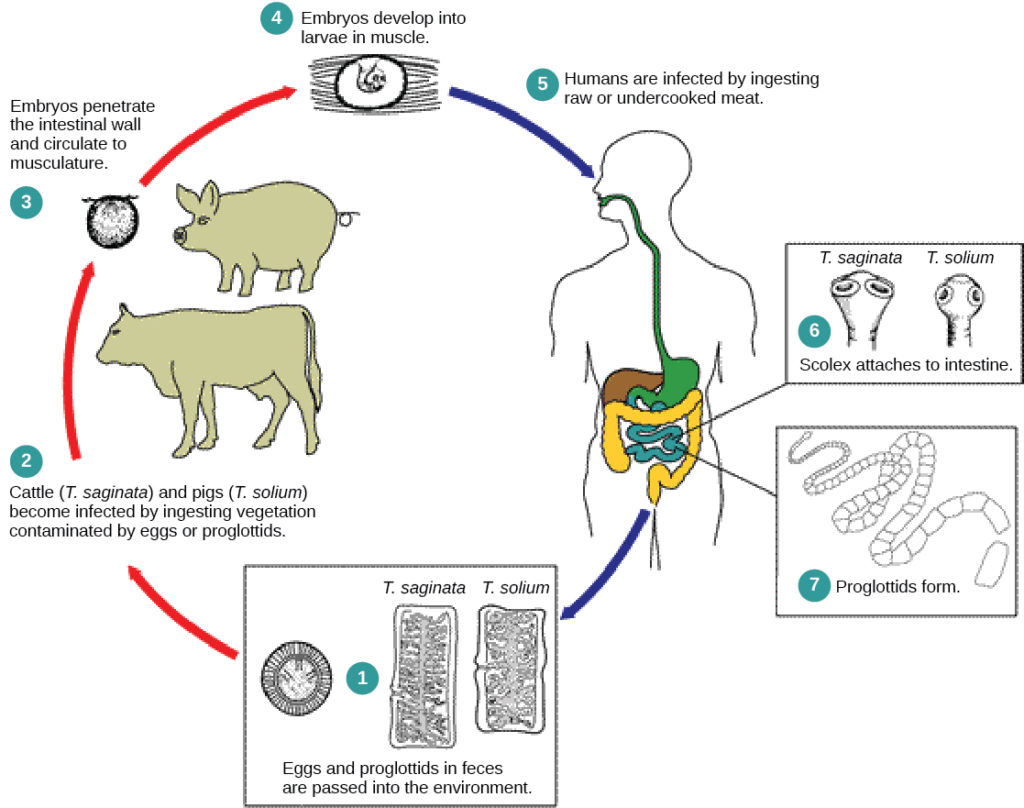 Proglottids are produced at the scolex and gradually migrate to the end of the tapeworm; at this point, they are “mature” and all structures except fertilized eggs have degenerated. Most reproduction occurs by cross-fertilization. The proglottid detaches from the body of the worm and is released into the feces of the organism. The eggs are eaten by an intermediate host. The juvenile worm infects the intermediate host and takes up residence, usually in muscle tissue. When the muscle tissue is eaten by the primary host, the cycle is completed. There are several tapeworm parasites of humans that are transmitted by eating uncooked or poorly cooked pork, beef, and fish.

Flatworms are acoelomate, triploblastic animals. They lack circulatory and respiratory systems, and have a rudimentary excretory system. This digestive system is incomplete in most species. There are four traditional classes of flatworms, the largely free-living turbellarians, the ectoparasitic monogeneans, and the endoparasitic trematodes and cestodes. Trematodes have complex lifecycles involving a molluscan secondary host and a primary host in which sexual reproduction takes place. Cestodes, or tapeworms, infect the digestive systems of primary vertebrate hosts.