High crop yields are pretty important—for keeping people fed, and also for keeping economies running. If you heard there was a single factor that reduced the yield of wheat by 20 percent and the yield of soybeans by 36 percent in the United States, for instance, you might be curious to know what it was[1].

As it turns out, the factor behind those (real-life) numbers is photorespiration. This wasteful metabolic pathway begins when rubisco, the carbon-fixing enzyme of the Calvin cycle, grabs O2 rather than CO2. It uses up fixed carbon, wastes energy, and tends to happens when plants close their stomata (leaf pores) to reduce water loss. High temperatures make it even worse.

Some plants, unlike wheat and soybean, can escape the worst effects of photorespiration. The C4 and CAM pathways are two adaptations—beneficial features arising by natural selection—that allow certain species to minimize photorespiration. These pathways work by ensuring that Rubisco always encounters high concentrations of CO2 making it unlikely to bind to O2.

Now, let’s take a closer look at the C3, C4 and CAM pathways and see how they do (or don’t!) reduce photorespiration.

A “normal” plant—one that doesn’t have photosynthetic adaptations to reduce photorespiration—is called a C3 plant. The first step of the Calvin cycle is the fixation of carbon dioxide by rubisco, and plants that use only this “standard” mechanism of carbon fixation are called C3 plants, for the three-carbon compound (3-PGA) the reaction produces[2]. About 85 percent of the plant species on the planet are C3 plants, including rice, wheat, soybeans and all trees. 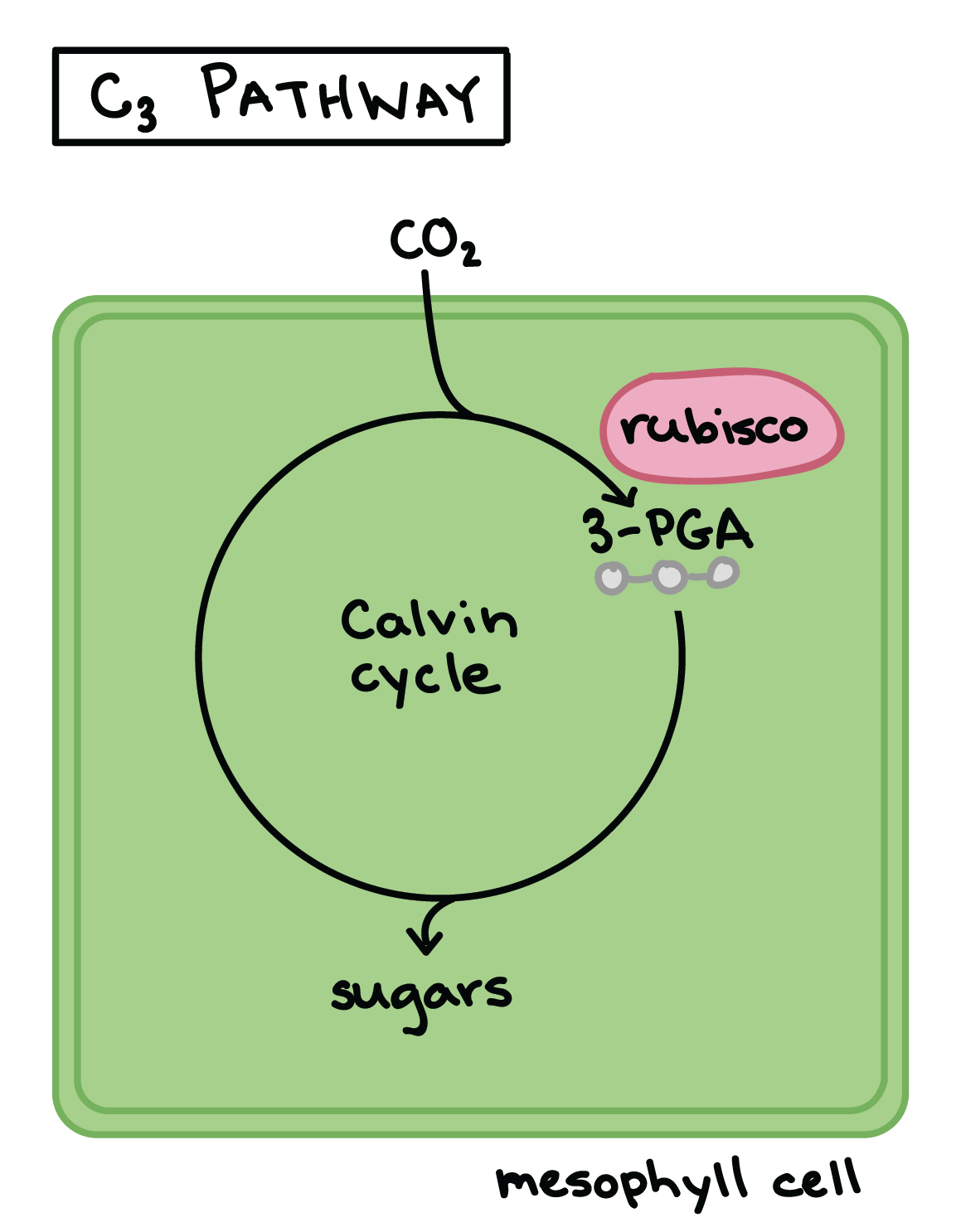 To see how this division helps, let’s look at an example of C4 photosynthesis in action. First, atmospheric CO2 is fixed in the mesophyll cells to form a simple, 4-carbon organic acid (oxaloacetate). This step is carried out by a non-rubisco enzyme, PEP carboxylase, that has no tendency to bind O2. Oxaloacetate is then converted to a similar molecule, malate, that can be transported in to the bundle-sheath cells. Inside the bundle sheath, malate breaks down, releasing a molecule of CO2. The CO2 is then fixed by rubisco and made into sugars via the Calvin cycle, exactly as in C3 photosynthesis. 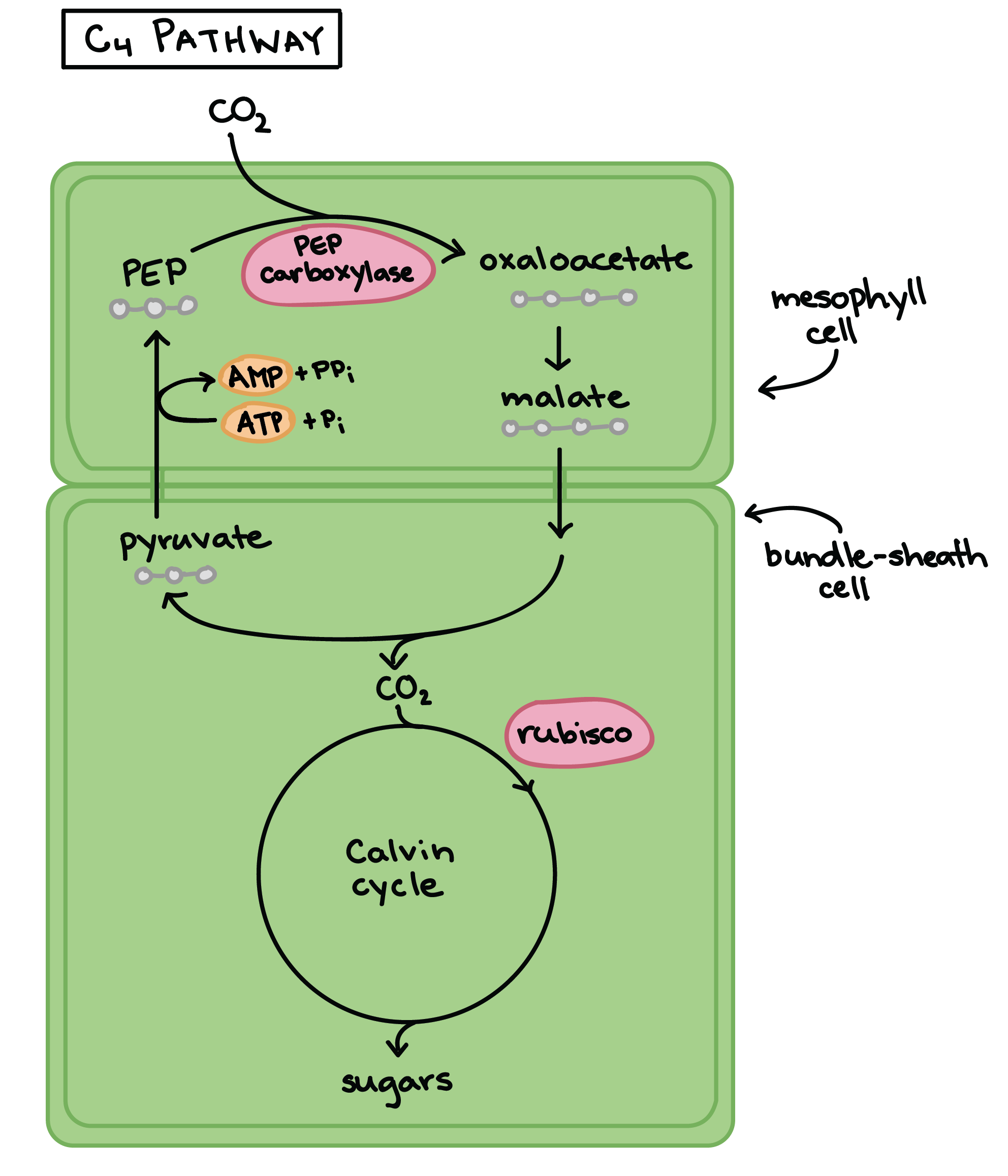 This process isn’t without its energetic price: ATP must be expended to return the three-carbon “ferry” molecule from the bundle sheath cell and get it ready to pick up another molecule of atmospheric CO2. However, because the mesophyll cells constantly pump CO2 into neighboring bundle-sheath cells in the form of malate, there’s always a high concentration of CO2 relative to O2 right around rubisco. This strategy minimizes photorespiration.

The C4 pathway is used in about 3 percent of all vascular plants; some examples are crabgrass, sugarcane and corn. C4 plants are common in habitats that are hot, but are less abundant in areas that are cooler. In hot conditions, the benefits of reduced photorespiration likely exceed the ATP cost of moving CO2 from the mesophyll cell to the bundle-sheath cell.

Some plants that are adapted to dry environments, such as cacti and pineapples, use the crassulacean acid metabolism (CAM) pathway to minimize photorespiration. This name comes from the family of plants, the Crassulaceae, in which scientists first discovered the pathway.

Instead of separating the light-dependent reactions and the use of CO2 in the Calvin cycle in space, CAM plants separate these processes in time. At night, CAM plants open their stomata, allowing CO2 to diffuse into the leaves. This CO2 is fixed into oxaloacetate by PEP carboxylase (the same step used by C4 plants), then converted to malate or another type of organic acid[3].

The organic acid is stored inside vacuoles until the next day. In the daylight, the CAM plants do not open their stomata, but they can still photosynthesis. That’s because the organic acids are transported out of the vacuole and broken down to release CO2, which enters the Calvin cycle. This controlled release maintains a high concentration of CO2 around rubisco[4]. 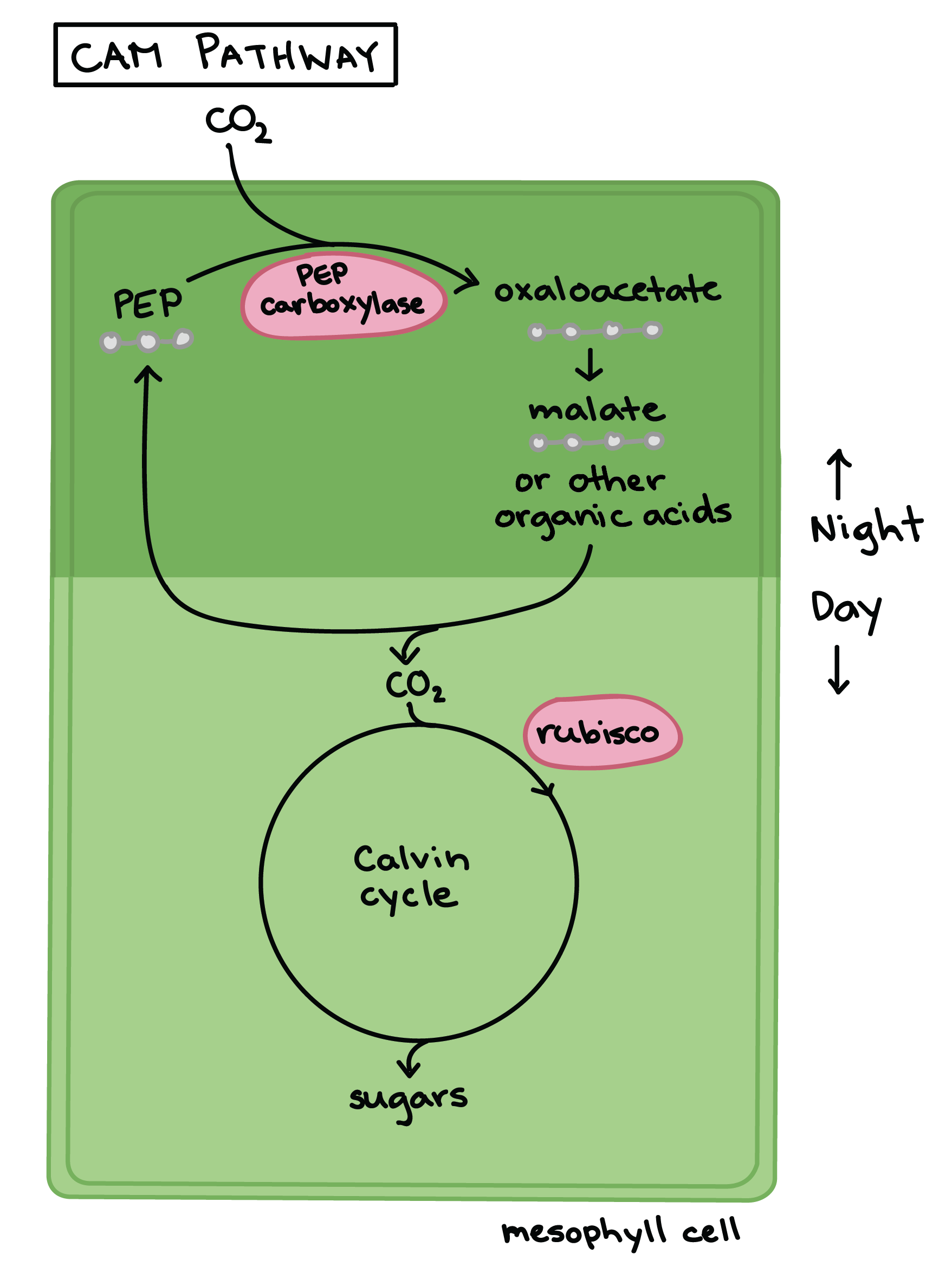 The CAM pathway requires ATP at multiple steps (not shown above), so like C4 photosynthesis, it is not an energetic “freebie.”[5] However, plant species that use CAM photosynthesis not only avoid photorespiration, but are also very water-efficient. Their stomata only open at night, when humidity tends to be higher and temperatures are cooler, both factors that reduce water loss from leaves. CAM plants are typically dominant in very hot, dry areas, like deserts.

Both the C4 and CAM pathways have evolved independently over two dozen times, which suggests they may give plant species in hot climates a significant evolutionary advantage[6].