Plants have a number of sophisticated uses for light that go far beyond their ability to photosynthesize low-molecular-weight sugars using only carbon dioxide, light, and water. Photomorphogenesis is the growth and development of plants in response to light. It allows plants to optimize their use of light and space. Photoperiodism is the ability to use light to track time. Plants can tell the time of day and time of year by sensing and using various wavelengths of sunlight. Phototropism is a directional response that allows plants to grow towards, or even away from, light. Positive phototropism is growth towards a light source (Figure 1), while negative phototropism (also called skototropism) is growth away from light. 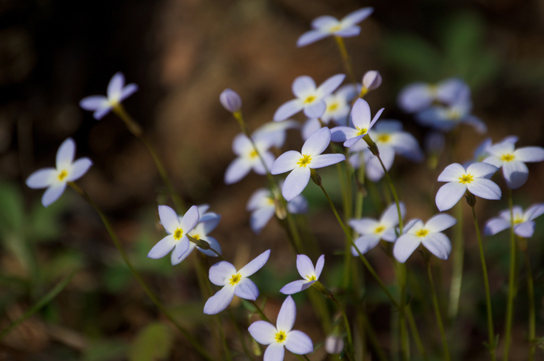 Use the navigation menu in the left panel of this website to view images of plants in motion.

Whether or not they germinate in the light or in total darkness, shoots usually sprout up from the ground, and roots grow downward into the ground. A plant laid on its side in the dark will send shoots upward when given enough time. Gravitropism ensures that roots grow into the soil and that shoots grow toward sunlight. Growth of the shoot apical tip upward is called negative gravitropism, whereas growth of the roots downward is called positive gravitropism.

Amyloplasts (also known as statoliths) are specialized plastids that contain starch granules and settle downward in response to gravity. Amyloplasts are found in shoots and in specialized cells of the root cap. When a plant is tilted, the statoliths drop to the new bottom cell wall. A few hours later, the shoot or root will show growth in the new vertical direction.

The mechanism that mediates gravitropism is reasonably well understood. When amyloplasts settle to the bottom of the gravity-sensing cells in the root or shoot, they physically contact the endoplasmic reticulum (ER), causing the release of calcium ions from inside the ER. This calcium signaling in the cells causes polar transport of the plant hormone IAA to the bottom of the cell. In roots, a high concentration of IAA inhibits cell elongation. The effect slows growth on the lower side of the root, while cells develop normally on the upper side. IAA has the opposite effect in shoots, where a higher concentration at the lower side of the shoot stimulates cell expansion, causing the shoot to grow up. After the shoot or root begin to grow vertically, the amyloplasts return to their normal position. Other hypotheses—involving the entire cell in the gravitropism effect—have been proposed to explain why some mutants that lack amyloplasts may still exhibit a weak gravitropic response.

Plant Responses to Wind and Touch

The shoot of a pea plant winds around a trellis, while a tree grows on an angle in response to strong prevailing winds. These are examples of how plants respond to touch or wind.

The movement of a plant subjected to constant directional pressure is called thigmotropism, from the Greek words thigma meaning “touch,” and tropism implying “direction.” Tendrils are one example of this. The meristematic region of tendrils is very touch sensitive; light touch will evoke a quick coiling response. Cells in contact with a support surface contract, whereas cells on the opposite side of the support expand. Application of jasmonic acid is sufficient to trigger tendril coiling without a mechanical stimulus.

A thigmonastic response is a touch response independent of the direction of stimulus. In the Venus flytrap, two modified leaves are joined at a hinge and lined with thin fork-like tines along the outer edges. Tiny hairs are located inside the trap. When an insect brushes against these trigger hairs, touching two or more of them in succession, the leaves close quickly, trapping the prey. Glands on the leaf surface secrete enzymes that slowly digest the insect. The released nutrients are absorbed by the leaves, which reopen for the next meal.

Thigmomorphogenesis is a slow developmental change in the shape of a plant subjected to continuous mechanical stress. When trees bend in the wind, for example, growth is usually stunted and the trunk thickens. Strengthening tissue, especially xylem, is produced to add stiffness to resist the wind’s force. Researchers hypothesize that mechanical strain induces growth and differentiation to strengthen the tissues. Ethylene and jasmonate are likely involved in thigmomorphogenesis.

Use the menu at the left to navigate to three short movies: a Venus fly trap capturing prey, the progressive closing of sensitive plant leaflets, and the twining of tendrils.

Defense Responses against Herbivores and Pathogens

Plants face two types of enemies: herbivores and pathogens. Herbivores both large and small use plants as food, and actively chew them. Pathogens are agents of disease. These infectious microorganisms, such as fungi, bacteria, and nematodes, live off of the plant and damage its tissues. Plants have developed a variety of strategies to discourage or kill attackers.

The first line of defense in plants is an intact and impenetrable barrier. Bark and the waxy cuticle can protect against predators. Other adaptations against herbivory include thorns, which are modified branches, and spines, which are modified leaves. They discourage animals by causing physical damage and inducing rashes and allergic reactions. A plant’s exterior protection can be compromised by mechanical damage, which may provide an entry point for pathogens. If the first line of defense is breached, the plant must resort to a different set of defense mechanisms, such as toxins and enzymes.

Secondary metabolites are compounds that are not directly derived from photosynthesis and are not necessary for respiration or plant growth and development. Many metabolites are toxic, and can even be lethal to animals that ingest them. Some metabolites are alkaloids, which discourage predators with noxious odors (such as the volatile oils of mint and sage) or repellent tastes (like the bitterness of quinine). Other alkaloids affect herbivores by causing either excessive stimulation (caffeine is one example) or the lethargy associated with opioids. Some compounds become toxic after ingestion; for instance, glycol cyanide in the cassava root releases cyanide only upon ingestion by the herbivore.

Mechanical wounding and predator attacks activate defense and protection mechanisms both in the damaged tissue and at sites farther from the injury location. Some defense reactions occur within minutes: others over several hours. The infected and surrounding cells may die, thereby stopping the spread of infection.

Long-distance signaling elicits a systemic response aimed at deterring the predator. As tissue is damaged, jasmonates may promote the synthesis of compounds that are toxic to predators. Jasmonates also elicit the synthesis of volatile compounds that attract parasitoids, which are insects that spend their developing stages in or on another insect, and eventually kill their host. The plant may activate abscission of injured tissue if it is damaged beyond repair.