Nitrogen is a major component of our nucleic acids and proteins and is critical to human agriculture. Getting nitrogen into the living world is difficult. Plants and phytoplankton are not equipped to incorporate nitrogen from the atmosphere (which exists as tightly bonded, triple covalent N2) even though this molecule comprises approximately 78 percent of the atmosphere. Nitrogen enters the living world via free-living and symbiotic bacteria, which incorporate nitrogen into their macromolecules through nitrogen fixation (conversion of N2). Cyanobacteria live in most aquatic ecosystems where sunlight is present; they play a key role in nitrogen fixation. Cyanobacteria are able to use inorganic sources of nitrogen to “fix” nitrogen. Rhizobium bacteria live symbiotically in the root nodules of legumes (such as peas, beans, and peanuts) and provide them with the organic nitrogen they need. Free-living bacteria, such as Azotobacter, are also important nitrogen fixers.

Organic nitrogen is especially important to the study of ecosystem dynamics since many ecosystem processes, such as primary production and decomposition, are limited by the available supply of nitrogen. As shown in Figure 1, the nitrogen that enters living systems by nitrogen fixation is successively converted from organic nitrogen back into nitrogen gas by bacteria. This process occurs in three steps in terrestrial systems: ammonification, nitrification, and denitrification. First, the ammonification process converts nitrogenous waste from living animals or from the remains of dead animals into ammonium (NH4+) by certain bacteria and fungi. Second, the ammonium is converted to nitrites (NO2−) by nitrifying bacteria, such as Nitrosomonas, through nitrification. Subsequently, nitrites are converted to nitrates (NO3−) by similar organisms. Third, the process of denitrification occurs, whereby bacteria, such as Pseudomonas and Clostridium, convert the nitrates into nitrogen gas, allowing it to re-enter the atmosphere. 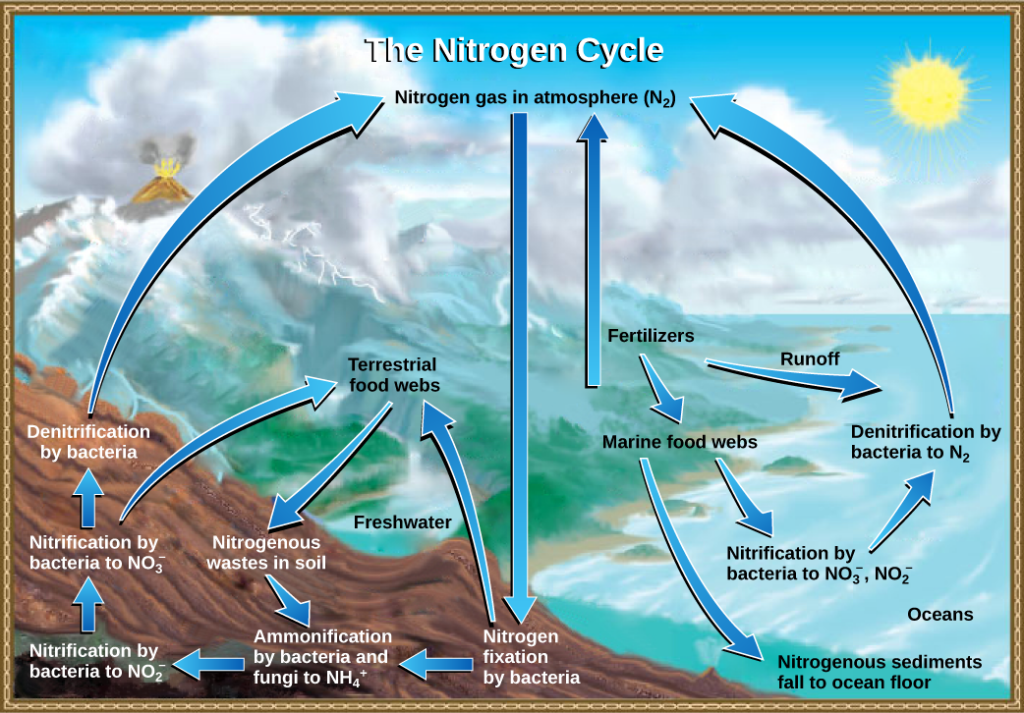 Figure 1. Nitrogen enters the living world from the atmosphere via nitrogen-fixing bacteria. This nitrogen and nitrogenous waste from animals is then processed back into gaseous nitrogen by soil bacteria, which also supply terrestrial food webs with the organic nitrogen they need. (credit: modification of work by John M. Evans and Howard Perlman, USGS)

Human activity can release nitrogen into the environment by two primary means: the combustion of fossil fuels, which releases different nitrogen oxides, and by the use of artificial fertilizers in agriculture, which are then washed into lakes, streams, and rivers by surface runoff. Atmospheric nitrogen is associated with several effects on Earth’s ecosystems including the production of acid rain (as nitric acid, HNO3) and greenhouse gas (as nitrous oxide, N2O) potentially causing climate change. A major effect from fertilizer runoff is saltwater and freshwater eutrophication, a process whereby nutrient runoff causes the excess growth of microorganisms, depleting dissolved oxygen levels and killing ecosystem fauna.

A similar process occurs in the marine nitrogen cycle, where the ammonification, nitrification, and denitrification processes are performed by marine bacteria. Some of this nitrogen falls to the ocean floor as sediment, which can then be moved to land in geologic time by uplift of the Earth’s surface and thereby incorporated into terrestrial rock. Although the movement of nitrogen from rock directly into living systems has been traditionally seen as insignificant compared with nitrogen fixed from the atmosphere, a recent study showed that this process may indeed be significant and should be included in any study of the global nitrogen cycle.