Water and Other Factors

Water is required by all living things because it is critical for cellular processes. Since terrestrial organisms lose water to the environment by simple diffusion, they have evolved many adaptations to retain water.

Organisms surrounded by water are not immune to water imbalance; they too have unique adaptations to manage water inside and out of cells.

Some abiotic factors, such as oxygen, are important in aquatic ecosystems as well as terrestrial environments. Terrestrial animals obtain oxygen from the air they breathe. Oxygen availability can be an issue for organisms living at very high elevations, however, where there are fewer molecules of oxygen in the air. In aquatic systems, the concentration of dissolved oxygen is related to water temperature and the speed at which the water moves. Cold water has more dissolved oxygen than warmer water. In addition, salinity, current, and tide can be important abiotic factors in aquatic ecosystems. 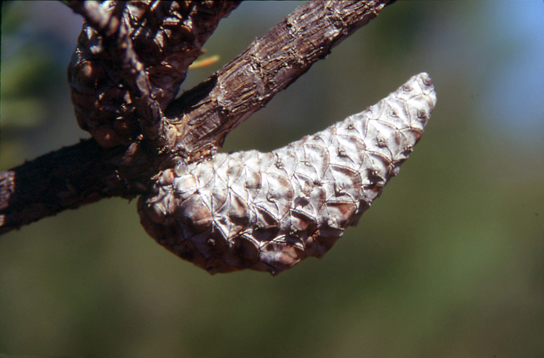 Figure 1. The mature cones of the jack pine open only when exposed to high temperatures, such as during a forest fire.  (credit: USDA)

Wind can be an important abiotic factor because it influences the rate of evaporation and transpiration. The physical force of wind is also important because it can move soil, water, or other abiotic factors, as well as an ecosystem’s organisms.

Fire is another terrestrial factor that can be an important agent of disturbance in terrestrial ecosystems. Some organisms are adapted to fire and, thus, require the high heat associated with fire to complete a part of their life cycle. For example, the jack pine (Pinus banksiana)—a coniferous tree—requires heat from fire for its seed cones to open. A fire is likely to kill most vegetation, so a seedling that germinates after a fire is more likely to receive ample sunlight than one that germinates under normal conditions. Through the burning of pine needles, fire adds nitrogen to the soil and limits competition by destroying undergrowth.