Work groups are not like a mob of people, storming through the streets setting couches on fire over a team win. Work groups are organized and have structural elements that help the members understand who is responsible for what tasks, what kind of behaviors are expected of group members, and more. These structural elements include roles, norms, and status. Groups are also influenced by size and the degree of group cohesiveness.

Let’s take a look at how each of those elements creates a structure that helps the members understand the purpose of and function within the group.

Bill Gates is perhaps best known as the principal founder of Microsoft.  He was the CEO, then the chairman, a board member and now, a technical advisor to the current CEO.  He’s also husband of Melinda Gates, father of their three children, the head of their foundation and a media influencer. These are all roles that Bill Gates has to manage in his everyday life.

A role is a set of expected behavior patterns attributed to someone occupying a given position in a social unit. Within a role there is

Let’s look at this through the lens of a day in the life of Bill Gates. First, let’s look at him in the role of fundraiser. When he’s looking for corporate donations to the Bill and Melinda Gates Foundation, he may visit the CEOs of other successful corporations. He may shake hands, have some lunches, get some commitments for money from these CEOs. That’s role identity. The actions and attitudes that are consistent with a fundraiser.

Bill Gates may choose to wear a suit and tie when he visits these CEOs looking for donations. He may use “corporate speak” that’s familiar to them. He may purchase the lunch. That might be Bill Gates’ role perception. It’s the way he thinks he should behave in the fundraiser role.

Later, he and Melinda may hold a press conference where he announces to the world that they’ve funded textbooks for 250 schools across the nation. Responses include headlines of “Yay, Bill and Melinda!” People talk on Facebook about how Bill and Melinda are really helping communities. They are meeting our role expectations for them.

Finally, Bill and Melissa race out of the press conference, fight traffic to the airport, and try to get home to the violin recital of their oldest child. This is role conflict. The duties of one of Bill’s and Melissa’s roles is in conflict with another—demands arise from both and need to be managed.

Norms are the acceptable standards of behavior within a group that are shared by the members.

When we learned about motivation, we talked a little about the Hawthorne Studies. To jog your memory, Hawthorne Electric hired researchers to do a study to determine if higher levels of light increased the production of a work group.

A full-scale appreciation of group behavior and its influence on work groups was uncovered by the Hawthorne Studies in the 1930s. What was discovered was that groups established a set of behaviors. Some of these behaviors were spurred on simply because they were being observed. In other situations, the group collectively established a group norm of production—and those individuals that violated the norm by overachieving were ridiculed for not following the established, albeit unspoken, norms.

There are common classes of norms:

If you wish to be accepted by a particular group, you may conform to that group’s norms even before you’ve become a part of it. Conformity is adjusting one’s behavior to align with the norms of a particular group. By watching and observing that group to better understand its expectations, you are using the group as a reference group. A reference group is an important group to which individuals belong or hope to belong and with whose norms individuals are likely to conform.

When people act outside a group’s norms—perhaps a manager makes sexual advances to his assistant, or one co-worker spreads vicious rumors about another—this is referred to as deviant workplace behavior.

The socially defined position or rank given to groups or group members by others is called status. Status seems to be something we cannot escape. No matter what the economic approach, we always seem to have classes of people. Even the smallest of groups will be judged by other small groups, opinions will be made, reputations will be earned, and status will be assigned.

High status members are often given more leeway when it comes to the group’s norms, too, and it makes them more at ease about resisting conformity. If you ever watched television’s medical drama House, the very talented, intelligent and curmudgeonly main character is allowed to act unconventionally and often inappropriately, largely because the diagnostic talents he brings to the group are so rare and valued. He is often assertive and outspoken with the other group members. He’s addicted to pain medications, he hates people and lets everyone know it, and yet his behaviors are tolerated. He’s a high status contributor to the group and they need his talents badly, so they overlook his failure to conform to their norms.

In spite of the high status members taking advantage of the norms and dominating group interactions, equity is an important part of status. We talked a bit about how perceived equity is a motivator for people. If status is observed when rewards and resources are distributed among the group members, then usually all is well.

Does the size of a group affect its dynamics? You bet! But how size affects the group depends on where you’re looking.

As a rule, smaller groups are faster than their larger counterparts. But when it comes to decision making, larger groups end up scoring higher marks. So, if there’s a decision to be made, it’s wise to poll a larger group . . . and then give the input to a smaller group so they can act on it.

A side note about size: groups with odd numbers of people tend to operate better than those that have an even number, as it eliminates the issue of a tie when votes are taken. Groups of five or seven tend to be an ideal size, because they’re still nimble like a smaller group, but they make solid decisions like a larger group does. 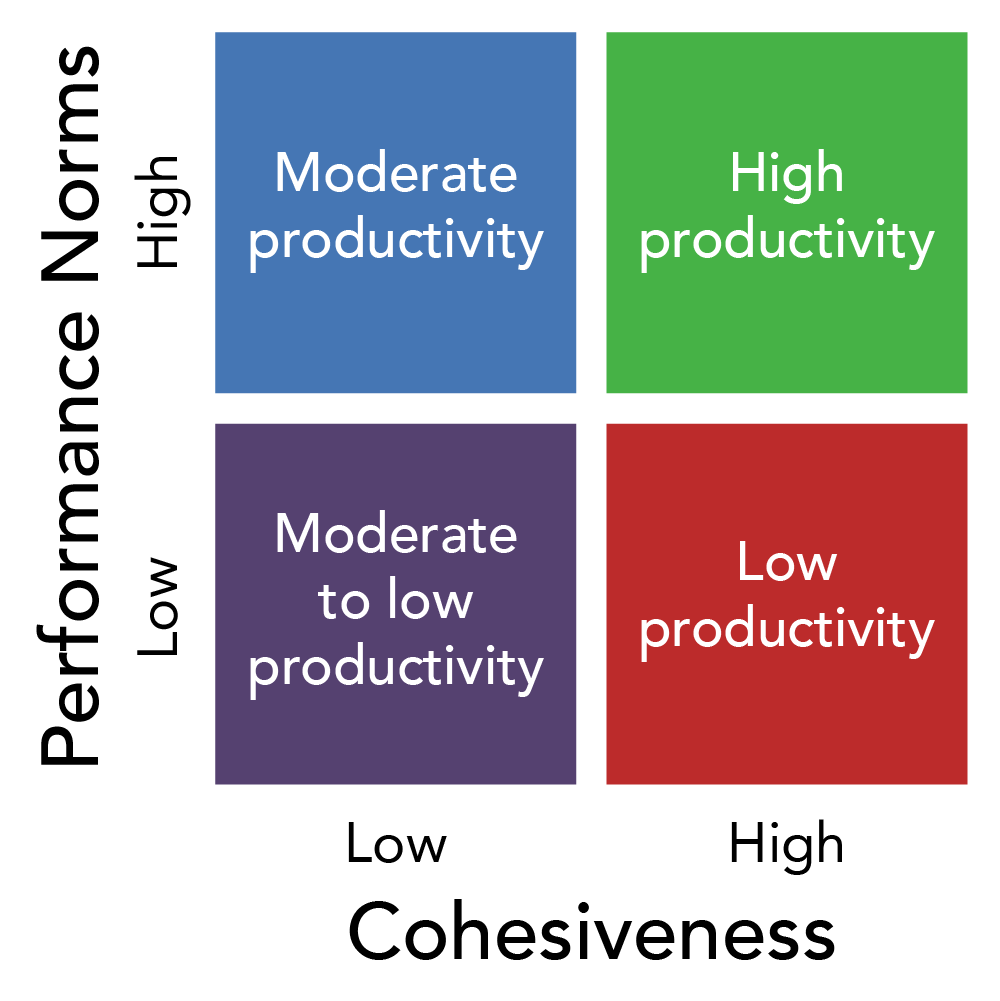 Cohesiveness is the degree to which group members enjoy collaborating with the other members of the group and are motivated to stay in the group.

Cohesiveness is related to a group’s productivity. In fact, the higher the cohesiveness, the more there’s a chance of low productivity, if norms are not established well. If the group established solid, productive performance norms and their cohesiveness is high, then their productivity will ultimately be high. If the group did not establish those performance norms and their cohesiveness is high, then their productivity is doomed to be low. Think about a group of high school friends getting together after school to work on a project. If they have a good set of rules and tasks divided amongst them, they’ll get the project done and enjoy the work. And, without those norms, they will end up eating Hot Pockets and playing video games until it’s time to go home for dinner.

Figure 1 shows the relationship between performance norms and cohesiveness. In the workplace, there are ways to increase cohesiveness within a group.

A group leader can:

All of these actions can build the all-important cohesiveness that impacts productivity.