Navigating change is a constant organizational issue, whether it’s on a small or large level. When it’s planned change, managers can stay ahead of change resistance and create a calculated plan to put change in place. There are several models and processes for managing organizational change. Let’s take a look at them now.

Kurt Lewin, a researcher and psychologist we studied earlier when we talked about leadership styles, proposed that successful change in an organization should be conducted in three steps: unfreezing, movement, and refreezing.

In the “unfreezing” process, the equilibrium state can be unfrozen in one of three ways. The driving forces, which direct behavior away from the status quo, can be increased. The restraining forces, which hinder movement from the existing equilibrium, can be decreased. Or, managers can put a combination of the two to use.

The second part of the process, “movement,” is the actual implementation of change. New practices and policies are implemented.

In the third step, “refreezing,” the newly adopted behaviors and processes are encouraged and supported to become a part of the employees’ routine activities. Coaching, training and an appropriate awards system help to reinforce. 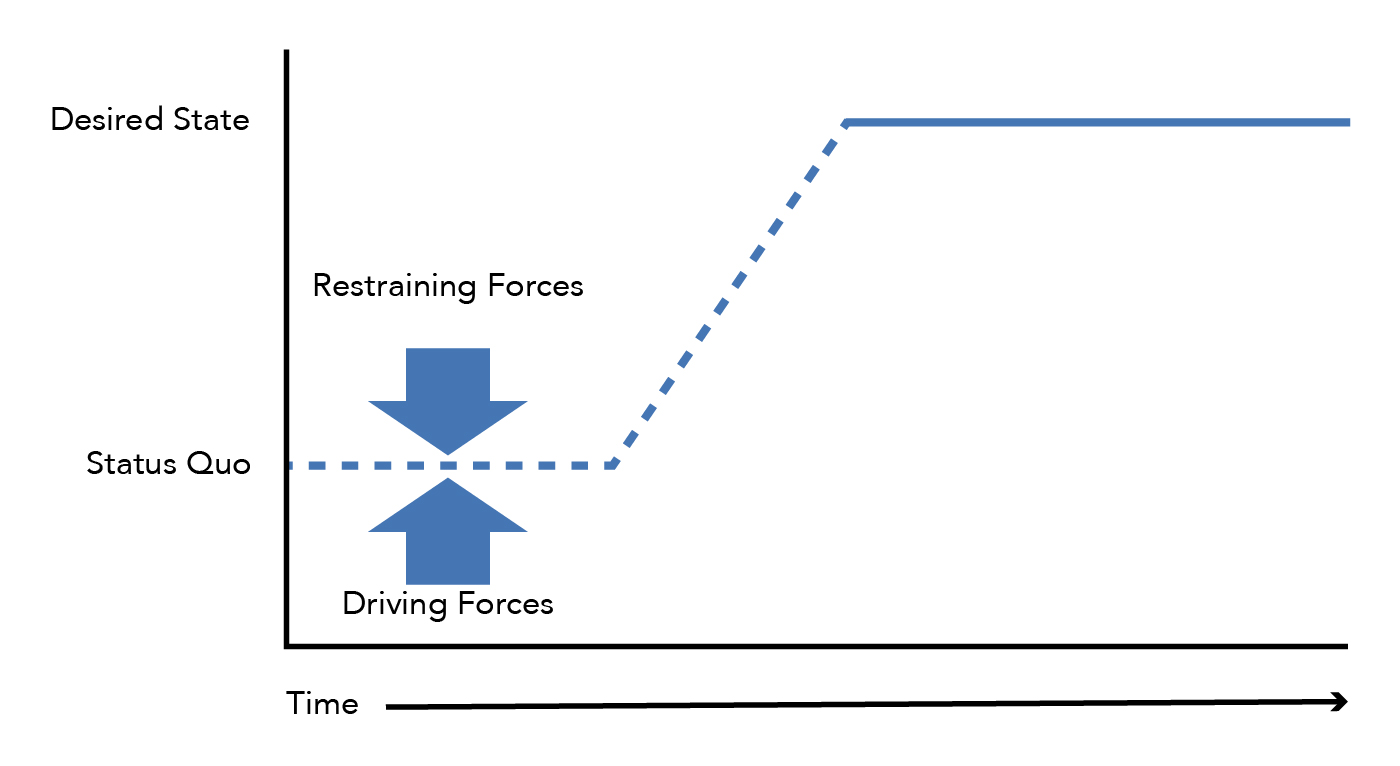 John Kotter, whom we studied earlier when we talked about the difference between managers and leaders, embellished Lewin’s three step model into a more detailed eight step model.

Kotter studied all of the places where failures could occur in Lewin’s model. Kotter recognized that several things needed to be added in:

His revised eight steps of change are as follows:

Kotter expanded Lewin’s “unfreezing” step with his first four recommendations. His steps five, six, and seven correspond with Lewin’s “movement” stage and step eight is parallel with the “refreezing” process.

David Nadler, an American organizational theorist, proposed a system model that suggests that any change within an organization has a ripple effect on all the other areas of the organization. He suggests that, to implement change successfully, a manager must consider four elements:

In accordance with a systems view, if a change impacts one area, it will have a domino effect on the other areas.

Action research is a change process based on systematic collection of data and then selection of a change action based on what the analyzed data indicate. The process of action research consists of five steps, very similar to the scientific method:

In the diagnosis stage, information is gathered about the problem or concerns. During analysis, the change agent determines what information is of primary concern and develops a plan of action, often involving those that will be impacted by the change. Feedback includes sharing with employees what has been discovered during diagnosis and analysis with the intent of getting their thoughts and developing action plans.

Finally, there is action. Employees and the change agent (this is a person who champions and sees change management from start to successful finish) carry out the actions required to solve the problem. Then, the final step is evaluation, where the action plan’s effectiveness is reviewed and, if necessary, tweaked for better performance.

This approach is very problem focused, where many people approach a problem with a more solution-centered outlook. It also minimizes resistance to change because it involves affected employees all along the process.

The guiding principles of organizational development are:

Crisis management is really just the management of unplanned change. When managers unsuccessfully anticipate their competitor’s next move or don’t accurately read the environment, a crisis can occur. It can also occur as the result of organizational inertia.

Crisis management can be avoided by keeping the organization healthy. That is, not allowing it to become inflexible, infusing a certain amount of conflict in order to stave off complacency, and keeping innovation fresh by encouraging experimentation and bringing in new people with new ideas.

Please note that this is not referring in any way to a public relations crisis. “Crises” like Volkswagen’s issue covering up their vehicles’ excessive emissions, or Les Moonves’ poor judgement with the opposite gender at CBS, are a different kind of animal altogether and not what we’re talking about here.

Organizations that can anticipate change, minimize resistance and come out on the other side are far more likely to be successful. Almost always, those companies that suffer from poor change management suffer the consequences financially, often leading to the organization closing its doors. In the next section, we’ll take a look at a few companies that faced change, the decisions they made, and how it worked out for them.