Putting It Together: Ethics in Business 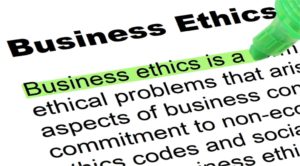 Let’s return to our opening scenario and apply what you’ve learned in this module. We started by considering the impact of ethical decisions related to the housing market leading up to the Great Recession. Mortgage brokers, ratings agencies, and financial institutions sacrificed good ethics for significant profits.

But how important were these ethical lapses, and how much focus should have been given to these errors in judgment?

In this module, you learned about the factors that determine the ethical intensity of an issue. Because ethical dilemmas can vary, this is a framework that helps us understand how important it is to address a particular topic. Let’s use this framework to evaluate the ethical problems during the housing meltdown.

The size of benefits that passed to the companies involved in creating these high-risk loans during the housing crisis was measured in the billions of dollars. Likewise, the magnitude of the impact on the economy when the tipping point was reached was even greater. Millions of people lost their jobs and homes. So the magnitude of this dimension shows an ethically intense decision.

Experts leading up to the housing crash were split on the probability dimension. Many believed that housing would not go down in value and that even if customers couldn’t repay their loans, the financial institutions could simply foreclose and resell the assets. On the other hand, there were many investors who were very vocal in their certainty of a coming collapse. For a lender uncertain of the probability, this dimension would add little to the intensity.

While industry insiders knew that “everyone was doing it” when it came to making bad loans, it wasn’t openly discussed. Ultimately, those involved knew that the social consensus would be opposed to what was done—especially given that the motivation was almost exclusively profit. Therefore, the social consensus dimension would suggest a high-intensity issue.

Lenders knew that even if the loans they made went bad, it would be some time before the effects were realized. Most customers would make payments for several months in order to keep their home. When they started getting behind, the servicing companies would make concessions to keep the borrower in the home. Likewise, foreclosure tends to be a relatively slow process. All of these factors suggest a low temporal immediacy, lessening the intensity of the ethical issue.

Did the decisions the lenders made impact those close to them or strangers? Though the lenders likely assumed that the impact would be only to strangers, the economic storm that followed affected most households to some extent. This misjudgment put less weight on proximity.

Using the framework that you learned, you can understand why the government stepped in with a massive overhaul of the regulatory framework of financial institutions. If the individuals involved had used a similar framework when making their personal decisions, perhaps the crisis would never have occurred. Those in positions of leadership and authority should be held to a high standard of integrity, which is why the study of ethics is foundational to the field of management.