The proper performance of the management control function is critical to the success of an organization. After plans are set in place, management must execute a series of steps to ensure that the plans are carried out. The steps in the basic control process can be followed for almost any application, such as improving product quality, reducing waste, and increasing sales. The basic control process includes the following steps:

To discourage the undesired behavior, XYZ installed cameras in the warehouse and placed locks on the cabinets where the most expensive sunglasses are stored. Only the warehouse managers have keys to these cabinets.

After three months, XYZ managers contact the bookkeeper to get the sales and inventory figures for the past three-month period (Step 2). The managers then compare the figures with the previous period, taking into account orders for deliveries, returns, and defective merchandise (Step 3). It has been determined that the company lost $200 the first month, $300 the second month, and $200 the third month due to theft, which is an improvement but short of the goal. Managers then come up with suggestions for making adjustments to the control system (Step 4).

XYZ senior executives approve of the suggestion to institute a zero-tolerance policy for employee theft. Now, if there is evidence that an employee has stolen a pair of sunglasses, that employee’s job will be terminated. The employee handbook is updated to include the change, and XYZ executives hold a meeting with all warehouse employees to communicate the policy change (Step 5).

Feedback occurs after an activity or process is completed. It is reactive. For example, feedback control would involve evaluating a team’s progress by comparing the production standard to the actual production output. If the standard or goal is met, production continues. If not, adjustments can be made to the process or to the standard.

An example of feedback control is when a sales goal is set, the sales team works to reach that goal for three months, and at the end of the three-month period, managers review the results and determine whether the sales goal was achieved. As part of the process, managers may also implement changes if the goal is not achieved. Three months after the changes are implemented, managers will review the new results to see whether the goal was achieved.

The disadvantage of feedback control is that modifications can be made only after a process has already been completed or an action has taken place. A situation may have ended before managers are aware of any issues. Therefore, feedback control is more suited for processes, behaviors, or events that are repeated over time, rather than those that are not repeated.

Proactive control, also known as preliminary, preventive, or feed-forward control, involves anticipating trouble, rather than waiting for a poor outcome and reacting afterward. It is about prevention or intervention. An example of proactive control is when an engineer performs tests on the braking system of a prototype vehicle before the vehicle design is moved on to be mass produced.

Proactive control looks forward to problems that could reasonably occur and devises methods to prevent the problems. It cannot control unforeseen and unlikely incidents, such as “acts of God.”

One example of concurrent control is fleet tracking. Fleet tracking by GPS allows managers to monitor company vehicles. Managers can determine when vehicles reach their destinations and the speed in which they move between destinations. Managers are able to plan more efficient routes and alert drivers to change routes to avoid heavy traffic. It also discourages employees from running personal errands during work hours.

In another example, Keen Media tries to reduce employee inefficiency by monitoring Internet activity. In accordance with company policy, employees keep a digital record of their activities during the workday. IT staff can also access employee computers to determine how much time is being spent on the Internet to conduct personal business and “surf the Web.” 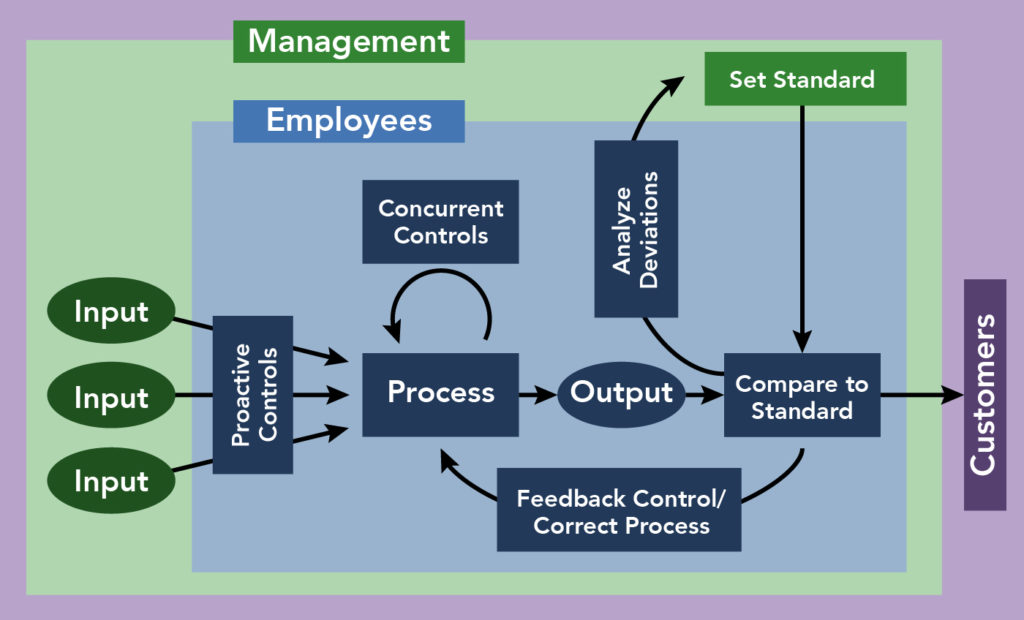