Module 6: Organizing and Outlining Your Speech

Identify the four types of speech delivery methods and when to use them.

There are four basic methods of speech delivery: manuscript, memorized, impromptu, and extemporaneous. We’ll look at each method and discuss the advantages and disadvantages of each. 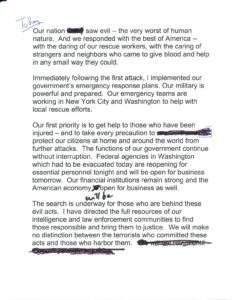 A manuscript page from President George W. Bush’s address to the nation on the day of the 9/11 attacks in 2001.

A manuscript speech is when the speaker writes down every word they will speak during the speech. When they deliver the speech, they have each word planned and in front of them on the page, much like a newscaster who reads from a teleprompter.

The advantage of using a manuscript is that the speaker has access to every word they’ve prepared in advance. There is no guesswork or memorization needed. This method comforts some speakers’ nerves as they don’t have to worry about that moment where they might freeze and forget what they’ve planned to say. They also are able to make exact quotes from their source material.

When the exact wording of an idea is crucial, speakers often read from a manuscript, for instance in communicating public statements from a company.

However, the disadvantage with a manuscript is that the speakers have MANY words in front of them on the page. This prohibits one of the most important aspects of delivery, eye contact. When many words are on the page, the speakers will find themselves looking down at those words more frequently because they will need the help. If they do look up at the audience, they often cannot find their place when the eye returns to the page. Also, when nerves come into play, speakers with manuscripts often default to reading from the page and forget that they are not making eye contact or engaging their audience. Therefore, manuscript is a very difficult delivery method and not ideal.  Above all, the speakers should remember to rehearse with the script so that they practice looking up often.

The fall of the Berlin Wall on November 9, 1989, owed in large part to a momentary error made by an East German government spokesperson. At a live press conference, Günter Schabowski tried to explain new rules relaxing East Germany’s severe travel restrictions. A reporter asked, “when do these new rules go into effect?” Visibly flustered, Schabowski said, “As far as I know, it takes effect immediately, without delay.” In fact, the new visa application procedure was supposed to begin the following day, and with a lot of bureaucracy and red tape. Instead, thousands of East Berliners arrived within minutes at the border crossings, demanding to pass through immediately. The rest is history.

The outcome of this particular public-relations blunder was welcomed by the vast majority of East and West German citizens, and hastened the collapse of communism in Eastern and Central Europe. It’s probably good, then, that Schabowski ran this particular press conference extemporaneously, rather than reading from a manuscript.

You can view the transcript for “The mistake that toppled the Berlin Wall” here (opens in new window).

A memorized speech is also fully prepared in advance and one in which the speaker does not use any notes. In the case of an occasion speech like a quick toast, a brief dedication, or a short eulogy, word-for-word memorization might make sense. Usually, though, it doesn’t involve committing each and every word to memory, Memorizing a speech isn’t like memorizing a poem where you need to remember every word exactly as written. Don’t memorize a manuscript! Work with your outline instead. Practice with the outline until you can recall the content and order of your main points without effort. Then it’s just a matter of practicing until you’re able to elaborate on your key points in a natural and seamless manner. Ideally, a memorized speech will sound like an off-the-cuff statement by someone who is a really eloquent speaker and an exceptionally organized thinker!

The advantage of a memorized speech is that the speaker can fully face their audience and make lots of eye contact. The problem with a memorized speech is that speakers may get nervous and forget the parts they’ve memorized. Without any notes to lean on, the speaker may hesitate and leave lots of dead air in the room while trying to recall what was planned. Sometimes, the speaker can’t remember or find his or her place in the speech and are forced to go get the notes or go back to the PowerPoint in some capacity to try to trigger his or her memory. This can be an embarrassing and uncomfortable moment for the speaker and the audience, and is a moment which could be easily avoided by using a different speaking method.

How to: memorize a speech

There are lots of tips out there about how to memorize speeches. Here’s one that loosely follows an ancient memorization strategy called the method of loci or “memory palace,” which uses visualizations of familiar spatial environments in order to enhance the recall of information.

You can view the transcript for “How to Memorize a Speech” here (opens in new window).

An impromptu speech is one for which there is little to no preparation. There is often not a warning even that the person may be asked to speak. For example, your speech teacher may ask you to deliver a speech on your worst pet peeve. You may or may not be given a few minutes to organize your thoughts. What should you do? DO NOT PANIC. Even under pressure, you can create a basic speech that follows the formula of an introduction, body, and conclusion. If you have a few minutes, jot down some notes that fit into each part of the speech. (In fact, the phrase “speaking off the cuff,” which means speaking without preparation, probably refers to the idea that one would jot a few notes on one’s shirt cuff before speaking impromptu.)[1]) An introduction should include an attention getter, introduction of the topic, speaker credibility, and forecasting of main points. The body should have two or three main points. The conclusion should have a summary, call to action, and final thought. If you can organize your thoughts into those three parts, you will sound like a polished speaker. Even if you only hit two of them, it will still help you to think about the speech in those parts. For example, if a speech is being given on a pet peeve of chewed gum being left under desks in classrooms, it might be organized like this.

While an impromptu speech can be challenging, the advantage is that it can also be thrilling as the speaker thinks off the cuff and says what they’re most passionate about in the moment. A speaker should not be afraid to use notes during an impromptu speech if they were given any time to organize their thoughts.

The disadvantage is that there is no time for preparation, so finding research to support claims such as quotes or facts cannot be included. The lack of preparation makes some speakers more nervous and they may struggle to engage the audience due to their nerves.

The last method of delivery we’ll look at is extemporaneous. When speaking extemporaneously, speakers prepare some notes in advance that help trigger their memory of what they planned to say. These notes are often placed on notecards. A 4”x6” notecard or 5”x7” size card works well. This size of notecards can be purchased at any office supply store. Speakers should determine what needs to go on each card by reading through their speech notes and giving themselves phrases to say out loud. These notes are not full sentences, but help the speakers, who turn them into a full sentence when spoken aloud. Note that if a quote is being used, listing that quote verbatim is fine.

The advantage of extemporaneous speaking is that the speakers are able to speak in a more conversational tone by letting the cards guide them, but not dictate every word they say. This method allows for the speakers to make more eye contact with the audience. The shorter note forms also prevent speakers from getting lost in their words. Numbering these cards also helps if one gets out of order. Also, these notes are not ones the teacher sees or collects. While you may be required to turn in your speech outline, your extemporaneous notecards are not seen by anyone but you. Therefore, you can also write yourself notes to speak up, slow down, emphasize a point, go to the next slide, etc.

The disadvantage to extemporaneous is the speakers may forget what else was planned to say or find a card to be out of order. This problem can be avoided through rehearsal and double-checking the note order before speaking.

Many speakers consider the extemporaneous method to be the ideal speaking method because it allows them to be prepared, keeps the audience engaged, and makes the speakers more natural in their delivery. In your public speaking class, most of your speeches will probably be delivered extemporaneously.