Great Britain pursued a policy of law and order when dealing with the crises in the colonies in the late 1760s and 1770s. Relations between the British and many American Patriots worsened over the decade, culminating in an unruly mob destroying a fortune in tea by dumping it into Boston Harbor in December 1773 as a protest against British tax laws, an event which has come to be known as the “Boston Tea Party.” The destruction of the tea provoked a harsh British response in 1774, which included sending British troops to Boston and closing Boston Harbor, causing tensions and resentments to escalate further. The British tried to disarm the insurgents in Massachusetts by confiscating their weapons and ammunition and arresting the leaders of the Patriot movement. However, this effort faltered on April 19 when Massachusetts militias and British troops fired on each other as British troops marched to Lexington and Concord, an event immortalized by poet Ralph Waldo Emerson as the “shot heard round the world.” The American Revolution had begun.

On the Eve of Revolution

The decade from 1763 to 1774 was a difficult one for the British Empire. Although Great Britain had defeated the French in the French and Indian War, the debt from that conflict remained a stubborn and seemingly unsolvable problem for both Great Britain and the colonies. Great Britain tried various methods of raising revenue on both sides of the Atlantic to manage the enormous debt, including instituting a tax on tea and other goods sold to the colonies by British companies, but many subjects resisted these taxes. In the colonies, Patriot groups like the Sons of Liberty led boycotts of British goods and took violent measures that stymied British officials.

Boston proved to be the epicenter of protest. In December 1773, a group of Patriots protested the Tea Act passed that year—which, among other provisions, gave the East India Company a monopoly on tea—by boarding British tea ships docked in Boston Harbor and dumping tea worth over $1 million (in current prices) into the water. The destruction of the tea radically escalated the crisis between Great Britain and the American colonies. When the Massachusetts Assembly refused to pay for the tea, Parliament responded swiftly, passing a series laws designed to punish Massachusetts and bring the colony into line. The four acts were known by the British as the Coercive Acts. Colonists, however, referred to them as the Intolerable Acts. First, the Boston Port Act shut down the harbor and cut off all trade to and from the city. The Massachusetts Government Act put the colonial government entirely under British control, dissolving the assembly and restricting town meetings. The Administration of Justice Act allowed any royal official accused of a crime to be tried in Britain rather than by Massachusetts courts and juries. Finally, the Quartering Act, passed for all colonies, allowed the British army to quarter newly arrived soldiers in colonists’ homes.

Boston had been deemed in open rebellion, and the king, his advisors, and Parliament acted decisively to end the rebellion. However, many British Americans in other colonies were troubled and angered by Parliament’s response to Massachusetts. In September and October 1774, all the colonies except Georgia participated in the First Continental Congress in Philadelphia. The Congress advocated a boycott of all British goods and established the Continental Association to enforce local adherence to the boycott. The Association supplanted royal control and shaped resistance to Great Britain.

Many British colonists in Virginia, as in the other colonies, disapproved of the destruction of the tea in Boston Harbor. However, after the passage of the Coercive Acts, the Virginia House of Burgesses declared its solidarity with Massachusetts by encouraging Virginians to observe a day of fasting and prayer on May 24, 1774 in sympathy with the people of Boston. Almost immediately thereafter, Virginia’s royal governor dissolved the House of Burgesses, but many of its members met again in secret on May 30 and adopted a resolution stating that “the Colony of Virginia will concur with the other Colonies in such Measures as shall be judged most effectual for the preservation of the Common Rights and Liberty of British America.”

After the First Continental Congress in Philadelphia, Virginia’s Committee of Safety ensured that all merchants signed the non-importation agreements that the Congress had proposed. This British cartoon shows a Virginian signing the Continental Association boycott agreement. 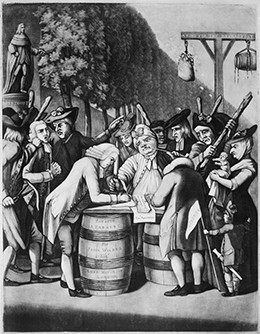 Figure 2. In “The Alternative of Williams-Burg” (1775), a merchant is required to sign a non-importation agreement or risk being covered with the tar and feathers suspended behind him.

Note the tar and feathers hanging from the gallows in the background of this image and the demeanor of the people surrounding the signer. What is the message of this engraving? Where are the sympathies of the artist? What is the meaning of the title “The Alternative of Williams-Burg?”

In an effort to restore law and order in Boston, the British dispatched General Thomas Gage to the New England seaport. He arrived in Boston in May 1774 as the new royal governor of the Province of Massachusetts, accompanied by several regiments of British troops. As in 1768, the British again occupied the town. Massachusetts delegates met in a Provincial Congress and published the Suffolk Resolves, which officially rejected the Coercive Acts and called for the raising of colonial militias to take military action if needed. The Suffolk Resolves signaled the overthrow of the royal government in Massachusetts.

Both the British and the rebels in New England began to prepare for conflict by turning their attention to supplies of weapons and gunpowder. General Gage stationed 3,500 troops in Boston, and from there he ordered periodic raids on towns where guns and gunpowder were stockpiled, hoping to impose law and order by seizing them. As Boston became the headquarters of British military operations, many residents fled the city.

Gage’s actions led to the formation of local rebel militias that were able to mobilize in a minute’s time. These minutemen, many of whom were veterans of the French and Indian War, played an important role in the war for independence. In one instance, General Gage seized munitions in Cambridge and Charlestown, but when he arrived to do the same in Salem, his troops were met by a large crowd of minutemen and had to leave empty-handed. In New Hampshire, minutemen took over Fort William and Mary and confiscated weapons and cannons there. New England readied for war.

The Outbreak of Fighting at Lexington and Concord 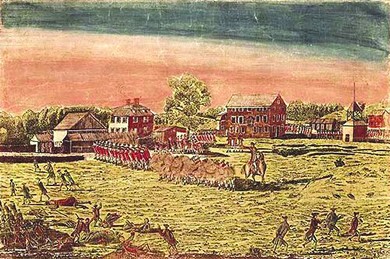 Figure 3. Amos Doolittle was an American printmaker who volunteered to fight against the British. His engravings of the battles of Lexington and Concord—such as this detail from The Battle of Lexington, April 19th, 1775—are the only contemporary American visual records of the events there.

Throughout late 1774 and into 1775, tensions in New England continued to mount. General Gage knew that a powder magazine was stored in Concord, Massachusetts, and on April 19, 1775, he ordered troops to seize these munitions. Instructions from London called for the arrest of rebel leaders Samuel Adams and John Hancock. Hoping for secrecy, his troops left Boston under cover of darkness, but riders from Boston let the militias know of the British plans. (Paul Revere was one of these riders, but the British captured him, and he never finished his ride. Henry Wadsworth Longfellow memorialized Revere in his 1860 poem, “Paul Revere’s Ride,” incorrectly implying that he made it all the way to Concord.) Minutemen met the British troops and skirmished with them, first at Lexington and then at Concord. The British retreated to Boston, enduring ambushes from several other militias along the way. Over four thousand militiamen took part in these skirmishes with British soldiers. Seventy-three British soldiers and forty-nine Patriots died during the British retreat to Boston. The famous confrontation is the basis for Emerson’s “Concord Hymn” (1836), which begins with the description of the “shot heard round the world.” Although propagandists on both sides pointed fingers, it remains unclear who fired that shot.

After the battles of Lexington and Concord, New England fully mobilized for war. Thousands of militias from towns throughout New England marched to Boston, and soon the city was besieged by a sea of rebel forces. In May 1775, Ethan Allen and Colonel Benedict Arnold led a group of rebels against Fort Ticonderoga in New York. They succeeded in capturing the fort, and cannons from Ticonderoga were brought to Massachusetts and used to bolster the Siege of Boston.

The Battle of Bunker Hill

In June 1775, General Gage resolved to take Breed’s Hill and Bunker Hill, the high ground across the Charles River from Boston, a strategic site that gave the rebel militias an advantage since they could train their cannons on the British. In the Battle of Bunker Hill, on June 17, the British launched three assaults on the hills, gaining control only after the rebels ran out of ammunition. British losses were very high—over two hundred were killed and eight hundred wounded—and, despite his victory, General Gage was unable to break the colonial forces’ siege of the city. In August, King George III declared the colonies to be in a state of rebellion. Parliament and many in Great Britain agreed with their king. Meanwhile, the British forces in Boston found themselves in a terrible predicament, isolated in the city and with no control over the countryside.

While Patriots in Massachusetts engaged the British army, the Continental Congress meeting in Philadelphia voted to form a Continental Army, naming Virginia delegate George Washington commander in chief on June 15, 1775.  The newly-named General Washington used the Fort Ticonderoga cannons to force the evacuation of the British from Boston. Washington had positioned these cannons on the hills overlooking both the fortified positions of the British and Boston Harbor, where the British supply ships were anchored. The British could not return fire on the colonial positions because they could not elevate their cannons. They soon realized that they were in an untenable position and had to withdraw from Boston. On March 17, 1776, the British evacuated their troops to Halifax, Nova Scotia by sea, ending the nearly year-long siege.

This video describes the Battle of Bunker Hill, including the great casualties suffered by the British army.

You can view the transcript for “The Fight at Breed’s Hill” here (opens in new window).

Watch this video to learn more about the Siege of Boston and the difficulties facing the armies on both sides during the early stages of the war.

Click through the following activity to better understand the significance of the location of Boston during the early stages of the Revolution.

By the time the British withdrew from Boston, fighting had broken out in other colonies as well. In May 1775, Mecklenburg County in North Carolina issued the Mecklenburg Resolves, stating that a rebellion against Great Britain had begun, that colonists did not owe any further allegiance to Great Britain, and that governing authority had now passed to the Continental Congress. The resolves also called upon the formation of militias to be under the control of the Continental Congress. Loyalists and Patriots clashed in North Carolina in February 1776 at the Battle of Moore’s Creek Bridge.

Coercive Acts: a series of laws passed by Parliament designed to bring Massachusetts firmly under British authority following the destruction of the tea in Boston Harbor. These laws were termed the Intolerable Acts by colonists.

minutemen: colonial militias prepared to mobilize and fight the British with a minute’s notice

popular sovereignty: the practice of allowing the citizens of a state or territory to decide issues based on the principle of majority rule

republicanism: a political philosophy that holds that states should be governed by representatives, not a monarch; as a social philosophy, republicanism required civic virtue of its citizens