The Process of Formulating an Argument

To format an argument, you should first choose your general topic (ex: American Industrial Revolution, 1800-1850), then the type of argument you would like to make (these will be covered in a moment), then narrow your subject from there to arrive at your broad argument (ex: “Eli Whitney’s cotton gin was the most important invention in American history”). 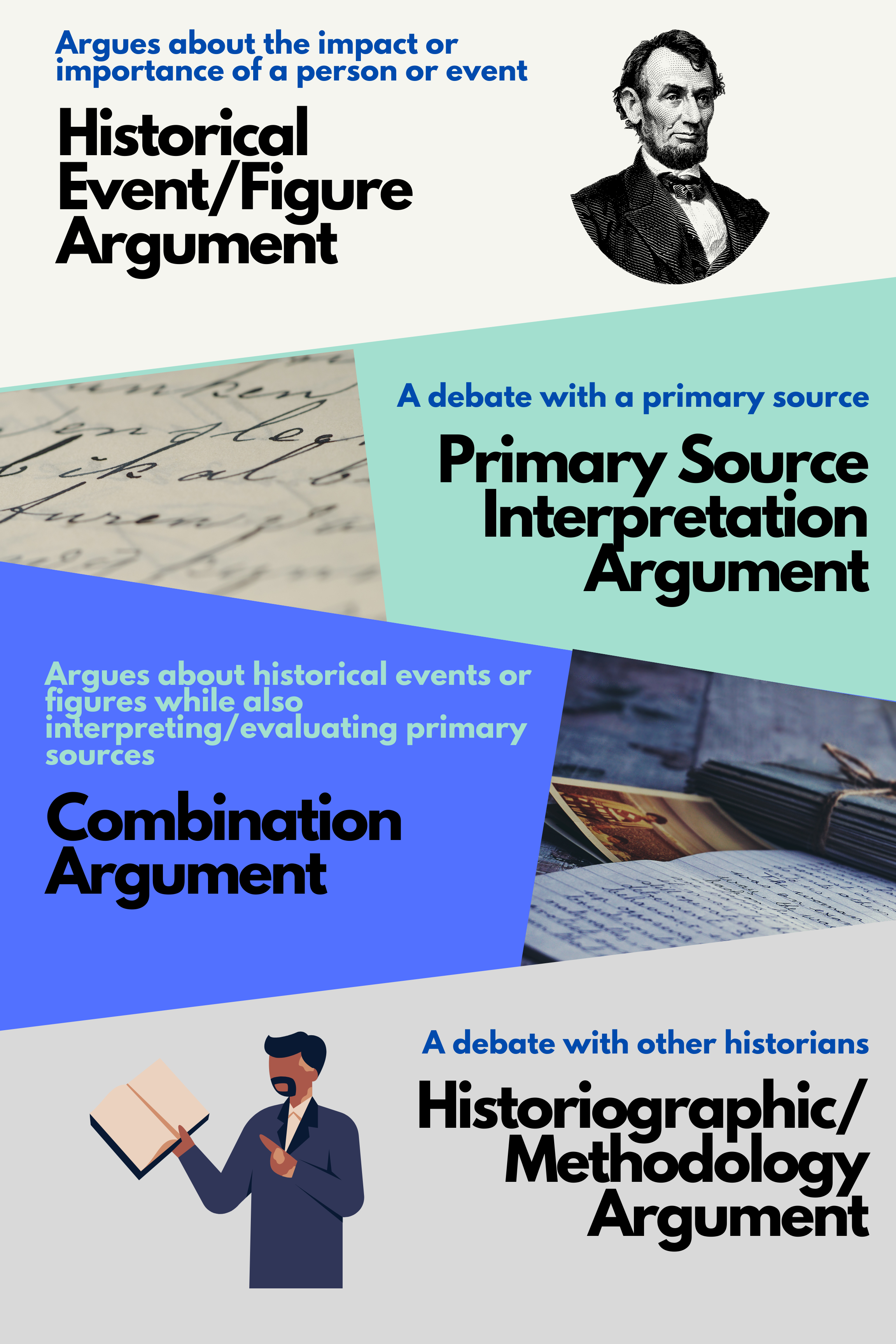 Once you have your broad argument, you can make it more specific using details: “Eli Whitney’s cotton gin was the most important invention in American economic history because it allowed the fast-growing textile industry to increase output, thereby turning the American economy into an export economy rather than an import economy.”)

These four types of historical arguments are just the basics. There are nuances and variations on these forms, but these will help you get started:

Now let’s walk through the steps of formulating an argument together. This one is relatively easy. We already have a broad general topic from this module: the 19th century Industrial Revolution. For this example, we will use Primary Source Interpretation and specifically focus our topic on gender roles during the Industrial Revolution. Take this excerpt from the module Reader, Alexis de Tocqueville, How Americans Understand the Equality of the Sexes, 1840:

“American women never manage the outward concerns of the family or conduct a business or take a part in political life; nor are they, on the other hand, ever compelled to perform the rough labor of the fields or to make any of those laborious efforts which demand the exertion of physical strength. No families are so poor as to form an exception to this rule.”

In order to begin formulating an argument about this excerpt, ask yourself these questions. Answers do not necessarily have to be elaborate at this point.

They Say, I Say

Gerald Graff and Cathy Birkenstein published a helpful book, They Say/I Say[1] that provides templates of actual language you could use in written arguments. The title of the book comes from the idea that writing is a form of joining an existing conversation—you find out what others are talking about, you add in your own two cents, and the conversation continues in various forms even after you leave. When writing, you are entering into a conversation with other scholars and other authors who have considered your same topic, so you can approach your paper by first considering what, “They say,” and then adding in your own, “I say” (without using the first person “I”). For example, in starting your argument, you could say something like:

Then you could support or contradict those ideas with your own beliefs. Templates for joining in an ongoing discussion may look something like this:

This often requires not only knowing about the person or event, but also anticipating potential counterarguments and controversies that might weaken your own argument. Now, it’s your turn to try creating an argument.

Try your hand at formulating an argument connected to a well-known figure. This can be a TV show character, a celebrity, an athlete, or a historical figure. Create a 1-2 sentence argument about that person using the “They say/I say” model listed above. For example, you could argue: “Many people find comic relief in Michael Scott’s character from The Office, but a closer look at Michael’s inflexible and narcissistic personality traits reveal that his character is far from funny, especially for those who can relate to unpleasant relationships with their bosses at work.” There is no correct answer here, but you can jot down your idea in the space below.

Here is the argument we generated in our earlier example:

“Alexis de Tocqueville was incorrect in his assumption that American women did not have to perform physical labor. Since the fact that women did many forms of labor was readily available to anyone in any American city during the 1830s and 40s, it is likely that he omitted this information in order to propagandize his writing about American gender roles.”

Here are three specific, evidentiary examples which support this argument:

1. The Lowell Mill Girls primary source document describes some of the physical labor done by women in the textile mills, refuting de Tocqueville’s report that no family was so poor that their women were exempt from manual labor.

3. De Tocqueville begins his section on gender roles by excoriating those in Europe who are attempting to bring about complete gender equality. It stands to reason that, given the previous two points, de Tocqueville would write so as to convince the French people that the American ideal of “separate spheres” was the correct model for gender roles and that they should strive to adopt that model.

On the next page, you will learn to evaluate different perspectives and put them into action to formulate counterarguments.