Voter Suppression in the Modern Age

An unfortunate but perpetual feature of democracy is the idea that certain sections of the population ought to be prevented from voting (hardly democratic, but here we are). Most nations throughout history that have claimed to be democratic actually have tight restrictions on voting, which have included citizenship, gender, and property ownership. In our modern era, universal suffrage is often used to describe a lack of voting restrictions aside from age or criminal status. The U.S. has a long history of voting rights and voter suppression, starting with the fact that most Americans were not actually considered “voters” for much of our history.

Once certain subsections of the population were granted the right to vote, groups like the KKK made it their mission to prevent those groups from actually showing up to the polls and casting ballots. The KKK used extreme violence and intimidation to accomplish their aims, but as Reconstruction pushed forward and men like President Ulysses Grant came to power, the KKK was stymied as the use of violence or physical intimidation to suppress votes became illegal.

However, instead of fading into obscurity, the KKK simply shifted its tactics. During the late 19th and early 20th century, Southern states were largely legislated by White Southern Democrats, many of whom were members of the KKK or at least sympathetic to them. They wrote and passed laws that exploited economics, demographics, and loopholes within existing voting rights protections in order to try and prevent Black Americans (and other sections of the population) from voting.

While the 15th Amendment gave Black men the right to vote, it did not always give them the ability or access to do so. For example, one of the most common voter suppression tactics after Reconstruction was the use of literacy tests for voter registration. A citizen who wished to register to vote had to pass a basic reading and writing test, which may sound simple, but for millions of Black Americans who had only recently been granted access to education, it was difficult to pass. In order to protect illiterate White people from exclusion, the so-called “understanding clause” allowed a voter to qualify if they could adequately explain the meaning of a section that was read to them. In practice, these rules were systematically abused to the point where local election officials effectively wielded the power to permit and deny suffrage at will. Poll taxes were also implemented in many Southern states, requiring people to pay between 2-6% of their income, in cash, to be able to vote. The justification was that poll taxes allowed states to hire more poll workers, thereby preventing voter fraud, but they also prevented Black Americans from voting, while allowing poor White men to vote without a poll tax if their father or grandfather had qualified to vote. Both literacy tests and poll taxes were legal until the mid-1960s.

Here are some other voter suppression tactics that have been used in the U.S. to target the vote of Black Americans and other minorities:

The KKK in Politics and Law Enforcement 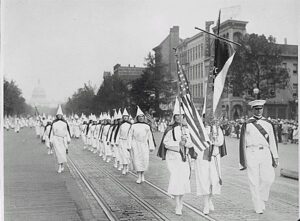 You may be wondering how voter suppression relates back to the KKK and domestic terrorism. While the “first wave” of the Klan mostly died out after Reconstruction, it was resurrected after World War I during a massive shift in American society, which included Prohibition, women’s rights, increased immigration from devastated nations in Europe, and the “loose morality” of the Roaring ’20s. This incarnation of the Klan was heavily involved in politics and, in fact, politics became its primary method of achieving its aims during the 20th century. In some states, the Klan had so much control over elections that its members became governors and senators. Some officials were not card-carrying Klan members, but accepted donations from them or were simply apathetic to the plight of Black Americans enough that they were willing to enforce “separate but equal” laws, thinking that the “equal” requirement absolved them of any racism.  The Klan had so much power during the 1920s that it was referred to as the “Invisible Empire” by Joseph Silverman, a New York rabbi writing in The North American Review.[6]

The new KKK of the 20th century heavily involved themselves in politics because of the backlash that they had faced for their violent actions during Reconstruction. This new, ‘polite’ KKK engaged in public events, raised money for charities, and started a chapter for women where it promoted “family values.” Ostensibly, the Klan had transformed itself from a violent vigilante group to a social and political club like any other. However, the dark side of the Klan was still present and their goals were much the same, although they now cloaked them in vague euphemisms and double-speak that was more acceptable to mainstream politics. 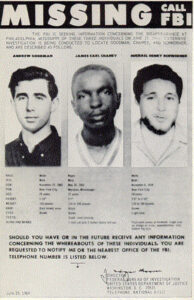 Figure 2. Goodman, Chaney, and Schwerner were three civil rights workers abducted and murdered by members of the Ku Klux Klan.

After a series of incidents involving corruption, crime, and violence by Klan leaders, it disbanded again around 1944, only to violently resurface during the Civil Rights Movement of the 1950s and 60s.  By this time, the KKK had closely aligned itself with police departments in many Southern states and were rarely prosecuted for their new acts of violence. The KKK published articles in its own newspapers encouraging members to join the police force in order to wield authority over Black Americans. Disturbingly, this White supremacist infiltration of law enforcement organizations is still actively occurring, according to FBI reports from 2006 and 2015.[7][8]

The KKK used these members inside police departments to commit crimes against Black Americans and their allies. Near Meridian, Mississippi in 1964, three young civil rights activists, Mickey Schwerner (24), James Chaney (21), and Andrew Goodman (20) were kidnapped by the town’s Deputy Sheriff, driven to a remote area, and murdered by a group of Klansmen waiting there for them.[9] The Deputy Sheriff, Cecil Price, who had kidnapped the men under the pretense of a traffic violation, was charged only with depriving the three men of their civil rights, but not with murder. Mississippi officials refused to charge any of the suspects with murder, in fact, and only seven of the eighteen suspects were convicted, none serving longer than six years in prison. In a shocking indictment of the Mississippi justice system, the 44-day-long search for the bodies of the missing men actually turned up the bodies of 8 young Black men who had gone missing the same year, but whose disappearances had not been investigated by local authorities nor brought to the attention of the FBI, as Schwerner and Goodman’s had.[10]

Schwerner’s widow, Rita, stated in the 2008 documentary “Neshoba: The Price of Freedom” that she believed if it had just been Chaney, a Black man, who was killed that the story would not have received national attention or been handled by the FBI. That same documentary showed the trial of Baptist minister Edgar Ray Killen, who was convicted in 2005 of manslaughter for being the organizer of the mob that committed the murders. Killen was originally acquitted in 1965 by an all-White hung jury because one juror did not want to “convict a preacher.”[11]

The lynching of Schwerner, Chaney, and Goodman is just one example of the egregious lack of justice for victims of the KKK. While the KKK and other White supremacist terrorist groups have killed and injured thousands of Americans, it must also be considered how many hundreds of thousands and possibly millions of Americans have been disenfranchised of their right to vote because of the activities of the KKK and its sympathizers and how that has affected the political landscape of the U.S. over the last 150 years.

The third wave of the KKK attempted (and still does) to legitimize its message by getting involved in civil affairs and law enforcement. By running for office, they were able to influence the legal framework which was helping to advance civil rights for Black Americans. Political offices gave the KKK and their sympathizers legitimacy and power over state and federal laws while encouraging members to join the police gave them the physical force needed to enact their racist and discriminatory policies. Though the organization is smaller today, it is still estimated to include between 3,000 and 6,000 people.

The Transition from Terror to Politics

Read these two articles, published in the September and December 1925 issue of The Forum, a magazine for controversial essays and stories:

First, let’s take a closer look at the Pattangall article.

Now, let’s take a closer look at the Evans article.

Now that you’ve had the chance to consider each article separately, let’s compare them side-by-side.

How does each author define “Americanism”? Create two short lists of adjectives or short phrases that each author uses to describe what their ideal America would look like. Compare the two lists side-by-side.

In 1965, the Voting Rights Act (VRA) was passed, outlawing many of the “loopholes” that White Southern legislatures used to disenfranchise Black voters, such as poll taxes and literacy tests. The VRA was wildly effective at allowing Black Americans to vote.

Look at the graphs from the article “19 maps and charts that explain voting rights in America” to see how voting restrictions have changed and evolved over the years. Graph #5 shows the effectiveness of the VRA. Graph #19 shows that voter turnout today, while improving in numbers, is still not representative of the actual population.

Since 1965, there have been a number of other measures passed on the federal and state level to protect the voting rights of all Americans, but specifically Black, Native American, and Hispanic voters. These efforts have been led by activists dedicated to bringing the most fundamental of all American rights to the nation. Today, activists are taking up the causes of voter ID laws, gerrymandering, and mandatory voting. Many activists believe that enforcing mandatory voting would create elections that better reflect the demographics of the U.S. Whereas current voter turnout sees higher numbers of old, rich, educated, White citizens, the actual makeup of the population is more diverse.

While the presence of the KKK and other White supremacist groups can still be felt in America today, one effective tool against them is to understand that they have evolved since the days of lynchings and burning crosses. Many tactics to target minorities now come in the form of legislation, elections, and political campaigns. They use softer language to conceal their agenda and hide behind their 1st Amendment right to free speech and free press. During many points in our history, White supremacy was so much ingrained in our institutions that we are still working to unravel it and root out its more lasting effects. Restoring voting rights to all Americans is at the heart of the ongoing fight against domestic terrorism and White supremacy in the United States.

Visit this map compiled by the Voting Rights Lab, which tracks legislation related to voting rights issues and publishes comprehensive guides to voting rights in different states. Choose a state from the map (maybe somewhere that you lived, where you were born, where you are registered to vote, or a place that you have visited) and choose an issue from the drop-down menu.

Your Vote and Your Voice

Maintaining voting rights for all Americans is critical to a healthy democracy. Thousands of Americans have died or been imprisoned trying to fight for the rights of all citizens to be protected and maintained. While there is still work to be done, the most important thing that you can do as an American is vote, especially in your state and local elections. Visit this voting toolkit link to access state-specific information on how to register, find a polling place, and how to support organizations that are working to protect voting rights in the U.S.