What you’ll learn to do: explain the concept of Manifest Destiny and the impetus for westward expansion 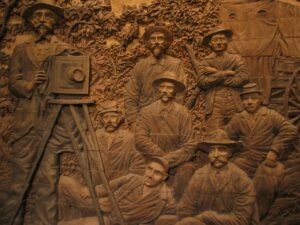 The expansionist movement in the United States gained tremendous momentum in the 1840s. The movement, driven by the idea of “Manifest Destiny,” justified its ambitions with a sense of mission and purpose, viewing American expansion as inevitable, just, and divinely ordained. This priority led to the addition of Texas and Oregon to the Union and was an underlying cause of the Mexican-American War, which resulted in the American acquisition of vast territories in the West, including the prize of California.

After the 1819 Adams-Onís Treaty established the boundary between Mexico and the United States, more American pioneers began to move into the northern portion of Mexico’s province of Coahuila y Texas. Following Mexico’s independence from Spain in 1821, American settlers immigrated to Texas in even larger numbers, intent on taking the land from the new and vulnerable Mexican nation in order to create a new American slave state. In this section, you’ll learn about Manifest Destiny and how this concept led to the creation of Texas as its own independent nation.