What you’ll learn to do: describe the U.S. Government’s relationships with Native Americans during Jackson’s presidency 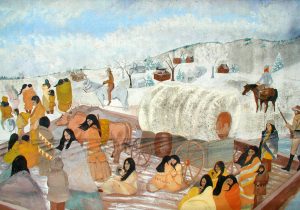 Popular culture in the Age of Jackson was preoccupied with the alleged savagery of Native people, a prejudice that shaped domestic policy. This popular animosity found expression through the application of state power. Even the U.S. Supreme Court’s ruling in favor of the Cherokee in Georgia offered no protection against the forced removal of the Five Civilized Tribes from the Southeast, mandated by the 1830 Indian Removal Act and carried out by the U.S. military.