Introduction to Religion and Individualism

What you’ll learn to do: explain the connection between evangelical Protestantism and the Second Great Awakening, and describe Transcendentalism 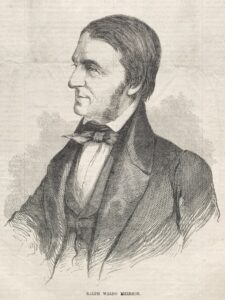 The spirit of reform permeated American culture in the antebellum era and fueled a belief in the possibility of changing society for the better, but not all Americans agreed on what the priorities of that change should be. Evangelical Protestantism competed with secular reform movements like Transcendentalism and the American Enlightenment. Preachers of the Second Great Awakening like Charles G. Finney urged listeners to take charge of their own salvation. This religious message dovetailed with the new economic possibilities created by the Industrial Revolution, making the Protestantism of the Second Great Awakening, with its emphasis on individual spiritual success, a reflection of the individualistic, capitalist spirit of the age. Transcendentalists and Enlightenment intellectuals took a different approach, but like their religiously oriented brethren, they too looked to create a better existence. These authors, most notably Ralph Waldo Emerson, identified a major tension in American life between the effort to be part of the democratic majority and the need to remain true to oneself as an individual.