Introduction to Social and Health Reform

What you’ll learn to do: explain details about the reform movements and progress regarding physical health and social reform in the early 19th century 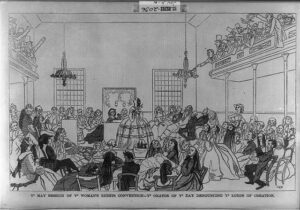 Instead of focusing on people’s souls or economic status, many 19th-century reformers chose to target vices that corrupted both the human body and society at large. For many, the consumption and abuse of alcohol appeared to be the most destructive and widespread problem in American society. Indeed, in the years before the Civil War, the United States appeared to be a republic of drunkenness to many. To combat this national substance abuse problem, reformers created a host of temperance organizations that first targeted the middle and upper classes, and then the working classes. Dedicated reformers like Sylvester Graham did not stop there. They wanted people to not only abstain from destructive habits but to also adopt new and healthy ones, like exercise, fresh air, and a good diet. Through their efforts, and those who wished to capitalize on the health trend, wellness became fashionable.

The spirit of religious awakening, reform, and self-improvement in the antebellum era also impacted women’s lives by allowing them to think about their place in society in new and empowering ways, leading to the beginnings of the first Women’s Rights Movement. Of all the antebellum reform movements, abolition played the most significant role in generating and supporting the early feminist movement in the United States. Other reform movements, particularly temperance, also became tied in with women’s rights. Although this movement, sometimes called First Wave Feminism did not ultimately lead to political rights for women, it kickstarted the struggle to overcome gender inequalities in the republic.