Introduction to the New Role of the Majority

What you’ll learn to do: explain the changing democratic landscape in America and how it relates to the election of 1840 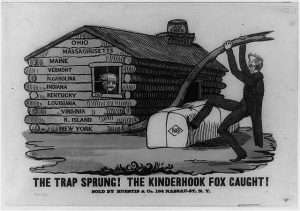 American culture of the 1830s reflected the rise of democracy. The majority exercised a new type of power that went well beyond politics, leading Alexis de Tocqueville to write about the “tyranny of the majority.” Very quickly, politicians among the Whigs and Democrats learned to master appeals to the many by presenting candidates and policies that catered to the will of the majority. In the 1840 “log cabin campaign,” both sides engaged in the new democratic electioneering. The uninhibited expression and rhetorical appeal seen during the campaign inaugurated a new political style.