Introduction to the War for Independence

What you’ll learn to do: describe the British and American strategies and the key battles during the war 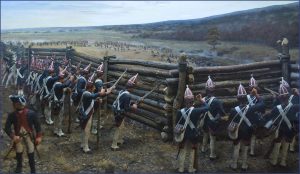 After the British retreated from Boston, they slowly adopted a strategy to isolate New England from the rest of the colonies and force the insurgents in that region into submission, believing that doing so would end the conflict. At first, British forces focused on taking the principle colonial centers. They began by easily capturing New York City in 1776. The following year, they took over the American capital of Philadelphia. The larger British effort to isolate New England was implemented in 1777. That effort ultimately failed when the British surrendered a force of over five thousand to the Americans in the fall of 1777 at the Battle of Saratoga. After Saratoga, the struggle for independence gained a powerful ally when France agreed to recognize the United States as a new nation and began to send much-needed military support. The entrance of France—Britain’s archrival in the contest of global empire—into the American fight helped to turn the tide of the war in favor of the revolutionaries.

In 1778, the war moved South as the British believed they would benefit from popular support there. Initially, they found great success, capturing major coastal cities like Savannah and Charleston, but taking the backcountry and holding the cities would prove far more difficult.  By 1781, the British recognized the failure of their southern strategy and sent their southern army to Yorktown to await transport from the British navy back to New York.  But, instead of an evacuation, British troops would find themselves trapped, and their surrender ended Britain’s ability to continue the war.