Introduction to Lincoln and Johnson’s Plan for Reconstruction

What you’ll learn to do: explain early plans and efforts for Reconstruction in the South 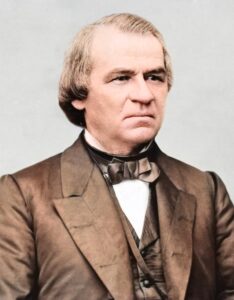 Following the Civil War, President Lincoln worked to reach his goal of reunifying the nation quickly and proposed a lenient plan to reintegrate the Confederate states. After his murder in 1865, Lincoln’s vice president, Andrew Johnson, sought to reconstitute the Union quickly, pardoning Southerners en masse and providing Southern states with a clear path back to readmission. While the president concluded that all that needed to be done in the South had been done by early 1866, Congress forged ahead to stabilize the defeated Confederacy and extend to freed people citizenship and equality before the law. Congress prevailed over Johnson’s vetoes as the friction between the president and the Republicans increased.