Pro-Jackson newspapers touted the president as a champion of opening land for White settlement and moving Indigenous inhabitants beyond the boundaries of “American civilization.” In this effort, Jackson reflected majority opinion: most Americans believed Native Americans had no place in the White republic. Jackson’s animosity toward Native peoples ran deep. He had fought against the Creek in 1813 and against the Seminole in 1817, and his reputation and popularity rested in large measure on his firm commitment to remove Indigenous peoples from states in the South. The 1830 Indian Removal Act and subsequent displacement of the Creek, Choctaw, Chickasaw, Seminole, and Cherokee tribes of the Southeast fulfilled the vision of a White nation and became one of the identifying characteristics of the Age of Jackson.

Popular culture in the first half of the nineteenth century reflected the discrimination and prejudices towards Native Americans that was pervasive during the Age of Jackson. Jackson skillfully played upon this racial hatred to engage the United States in a policy of ethnic cleansing, eradicating the Native presence from the land to make way for White civilization.

In an age of mass democracy, powerful anti-Native sentiments found expression in mass culture, shaping common perceptions. James Fenimore Cooper’s very popular historical novel, The Last of the Mohicans, published in 1826 as part of his Leatherstocking series, told the tale of Nathaniel “Natty” Bumppo (aka Hawkeye), who lived among Indigenous people but had been born to White parents. Cooper provides a romantic version of the French and Indian War in which Natty helps the British against the French and the feral, bloodthirsty Huron. Natty endures even as his Native friends die, including the noble Uncas, the last Mohican, in a narrative that dovetailed with most people’s approval of Native American removal.

Native Americans also made frequent appearances in art. George Catlin produced many paintings of Native peoples, which he offered as true representations despite routinely emphasizing their supposed savage nature. The Cutting Scene, Mandan O-kee-pa Ceremony is one example. Scholars have long questioned the accuracy of this portrayal of a rite of passage among the Mandan people. Accuracy aside, the painting captured the imaginations of White viewers, reinforcing their disgust at the presumed savagery of Native peoples.

The Paintings of George Catlin

George Catlin seized upon the public fascination with the supposedly exotic and savage Indian, seeing an opportunity to make money by painting them in a way that conformed to popular White stereotypes. In the late 1830s, he toured major cities with his Indian Gallery, a collection of paintings of Native peoples. Though he hoped his exhibition would be profitable, it did not bring him financial security.

Catlin routinely painted Native peoples in a supposedly primitive state. In Attacking the Grizzly Bear, the hunters do not have rifles and instead rely on spears. Such a portrayal stretches credibility as Native peoples had long been exposed to and adopted European weapons. Indeed, the painting’s depiction of Native Americans riding horses, which were introduced by the Spanish, makes clear that, as much as Catlin and White viewers wanted to believe in this caricature of an uncivilized and uncivilizable people, the reality was otherwise.

In Wi-jún-jon, Pigeon’s Egg Head (The Light) Going To and Returning From Washington, the viewer is shown a before and after portrait of Wi-jún-jon, who tried to emulate white dress and manners after going to Washington, DC. What differences do you see between these two representations of Wi-jún-jon? Do you think his attempt to imitate Whites was successful? Why or why not? What do you think Catlin was trying to convey with this depiction of Wi-jún-jon’s assimilation?

Take a moment to reflect on this painting below, State Names (2000) by Jaune Quick-To-See Smith (source: https://americanart.si.edu/artwork/state-names-73858).

What stands out to you? What does this make you think? How does it make you feel? 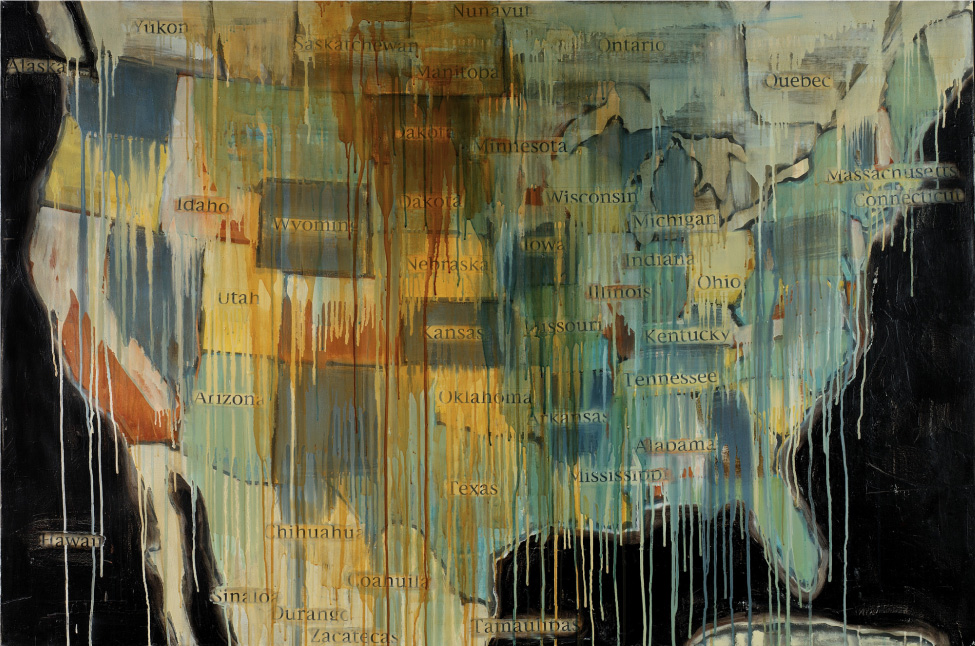 Perhaps you noticed the map, the bold colors, or the disorienting feeling conveyed by the dripping paint. This piece was created by artist Jaune Quick-To-See Smith. Smith is a member of the Confederated Salish and Kootenai Tribes of the Flathead Nation in Montana. In 2004, the artist said this about State Names, “We are the original owners of this country. Our land was stolen from us by the Euro-American invaders . . . I can’t say strongly enough that my maps are about stolen lands, our very heritage, our cultures, our worldview, our being . . . Every map is a political map and tells a story—that we are alive everywhere across this nation . . .”

Now take a look at the map again, how does this new knowledge change your interpretation of the painting? Note that the map only includes state names that come from Indigenous sources—and over half of state names come from Native American words or tribal names. States named after tribal names include the Dakotas, Utah, Alabama, Iowa, Kansas, and many other states come from Native terms and descriptions, such as the name Wyoming, which comes from a Delaware Indian word that means ​“mountains and valleys alternating.”

Learn more about the origin of U.S. State names at the U.S. Department of Interior website.

At the time of European contact in eastern North America, Native peoples comprised a diverse society within which hundreds of languages were spoken and a range of beliefs prevailed regarding property, kinship and labor. Despite regional and historical differences, the Indigenous peoples of North America did have some common characteristics. Most shared a religious perspective that did not clearly differentiate between the natural and supernatural worlds, or between secular and sacred acts. While European arrivals to the continent would eventually judge Native religiosity as primitive, alien, and perhaps diabolical, it was not so unlike their own Christianity in that most Native groups believed in a single Creator who presided over a hierarchical spiritual domain.

Perhaps a sharper difference existed between Native and European conceptions of land ownership. Tribal leaders would allot land to families for seasonal use, and any land which was not under cultivation was considered available for anyone to use. While a family had the right to work the land, they did not have a permanent right to the land itself. Land, the foundation of a hunting and farming society, was considered a resource to be held in common, and not a salable commodity. Villages moved every few years when game became scarce or the soil unyielding, which made the accumulation of extraneous material possessions impractical. This did not mean that status was not important in Native culture, though high status was more likely to come from a reputation for generosity than from a show of ostentatious personal wealth. While the Indigenous people of North America would not have recognized the type of affluence on display at the pinnacle of European society, in typical circumstances no member of the community would be allowed to go hungry, a civilizational achievement that led English colonist Roger Williams to observe “there are no beggars among them.”

Women occupied an egalitarian position in Native society as compared to contemporary Europe. While membership in a family was fundamental to everyday life, women were free to select their own romantic partners and could initiate a divorce if desired. Most Indigenous groups viewed family ties as matrilineal, which is to say that children automatically became members of their mother’s family, not their fathers. Female elders often helped select village leaders and took part in tribal meetings, granting them a high degree of influence in their communities. Native women owned dwellings and tools, and performed crucial agricultural labor. In contrast, under English law a married woman had no independent legal standing and did not control her household’s property in any substantial way.

These different cultural understandings of property rights and gender roles help to explain the incomprehension that would establish the groundwork for the Jacksonian era’s Indian Removal policies. European colonists and the later citizens of the United States would argue that Native people had not truly used the land and thus had no defensible claim to it. Overlooking the highly developed and regionally grounded Native societies in their midst, White settler authorities insisted that the disputed lands were a vacant expanse, an open wilderness ready to be cultivated for profit. [1] In the words of Andrew Jackson, “speedy removal [will] place a dense and civilized population in large tracts of country now occupied by a few savage hunters.” [2]

If the degree to which a culture is “civilized” can be seen in the achievements and behaviors of a people, then the example of Cherokee culture in the 19th century is instructive. Along with the other members of the so-called Five Civilized Tribes, the Cherokee had adopted many elements of White society, de-emphasizing hunting in favor of establishing farms, building roads, multi-level schools, Christian churches, commercial marketplaces, and community-based newspapers. Cultural adaptation aside, many Cherokees, Creeks, and Choctaws had also intermarried with Whites. Native people in these acculturated locales adopted White dress, foods, and leisure activities.[3]

Despite having adopted these conventions and having established a highly developed capital of the Cherokee nation, called New Echota, the Cherokee, along with their neighboring southeastern tribes, were targeted for removal and their ancestral lands were appropriated. Ironically, by demonstrating a high level of civilization, the Five Tribes had made the product of their labor that much more attractive to acquisitive White interests.

To learn more about the policies of Indian Removal in the Southeast and Native efforts to resist them, visit this website, courtesy of the Smithsonian Institute.