Promoters of English colonization in North America, many of whom never ventured across the Atlantic, wrote about the bounty the English would find there. These boosters of colonization hoped to turn a profit—whether by importing raw resources or providing new markets for English goods—and spread Protestantism. The English migrants who actually made the journey, however, had different goals. In Chesapeake Bay, English migrants established Virginia and Maryland with a decidedly commercial orientation. Though the early Virginians at Jamestown hoped to find gold, they and the settlers in Maryland quickly discovered that growing tobacco was the only sure means of making money. Thousands of unmarried, unemployed, and impatient young Englishmen, along with a few Englishwomen, pinned their hopes for a better life on the tobacco fields of these two colonies. 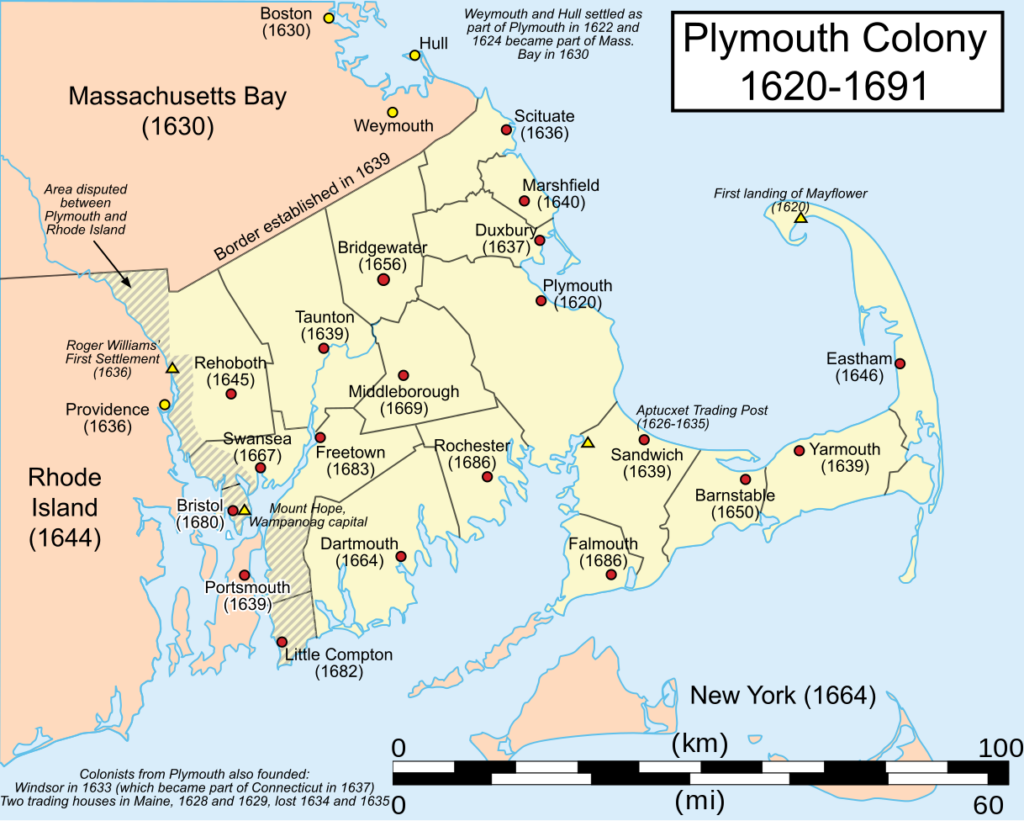 Figure 1. Map of the Plymouth Colony.

A very different group of English men and women flocked to the cold climate and rocky soil of New England, spurred by religious motives. Many of the Puritans crossing the Atlantic were people who brought families and children. Often they were following their ministers in a migration “beyond the seas,” envisioning a new English Israel where reformed Protestantism would grow and thrive, providing a model for the rest of the Christian world and a counter to what they saw as the Catholic menace. While the English in Virginia and Maryland worked on expanding their profitable tobacco fields, the English in New England built towns focused on the church, where each congregation decided what was best for itself. The Congregational Church is the result of the Puritan enterprise in America. Many historians believe the fault lines separating what later became the North and South in the United States originated in the profound differences between the Chesapeake and New England colonies.

The source of those differences lay in England’s domestic problems. Increasingly in the early 1600s, the English state church—the Church of England, established in the 1530s—demanded conformity, or compliance with its practices, but Puritans pushed for greater reforms. By the 1620s, the Church of England began to see leading Puritan ministers and their followers as outlaws and national security threats because of their opposition to its power. As the noose of conformity tightened around them, many Puritans decided to move to New England. By 1640, New England had a population of twenty-five thousand. Meanwhile, many loyal members of the Church of England, who ridiculed and mocked Puritans both at home and in New England, flocked to Virginia for economic opportunity. 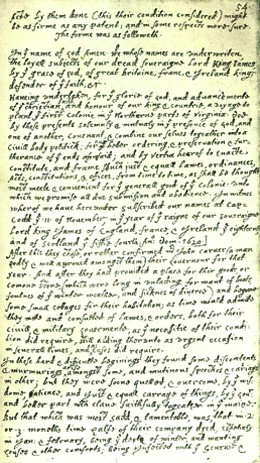 Figure 2. The original Mayflower Compact no longer exists; only copies, such as this ca.1645 transcription by William Bradford, remain.

The troubles in England escalated in the 1640s when civil war broke out, pitting Royalist supporters of King Charles I and the Church of England against Parliamentarians, the Puritan reformers and their supporters in Parliament. In 1649, the Parliamentarians gained the upper hand and, in an unprecedented move, executed Charles I. In the 1650s, therefore, England became a republic, a state without a king. English colonists in America closely followed these events. Indeed, many Puritans left New England and returned home to take part in the struggle against the king and the national church. Other English men and women in the Chesapeake colonies and elsewhere in the English Atlantic World looked on in horror at the mayhem the Parliamentarians, led by the Puritan insurgents, appeared to unleash in England. The turmoil in England made the administration and imperial oversight of the Chesapeake and New England colonies difficult, and the two regions developed divergent cultures.

The first group of Puritans to make their way across the Atlantic was a small contingent known as the Pilgrims. Unlike other Puritans, they insisted on a complete separation from the Church of England and had first migrated to the Dutch Republic seeking religious freedom. Although they found they could worship without hindrance there, they grew concerned that they were losing their English roots as they saw their children begin to learn the Dutch language and adopt Dutch ways. In addition, the English Pilgrims (and others in Europe) feared another attack on the Dutch Republic by Catholic Spain. Therefore, in 1620, they moved on to found Plymouth Colony in present-day Massachusetts.

The governor of Plymouth, William Bradford, was a Separatist, a proponent of complete separation from the English state church. Bradford and the other Pilgrim Separatists represented a major challenge to the prevailing vision of a unified English national church and empire. On board the Mayflower, which had been bound for Virginia but landed on the tip of Cape Cod, Bradford and forty other adult men signed the Mayflower Compact, which presented a religious (rather than an economic) rationale for colonization. The compact expressed a community ideal of working together. When a larger exodus of Puritans established the Massachusetts Bay Colony in the 1630s, the Pilgrims at Plymouth welcomed them and the two colonies cooperated with each other.

The Mayflower Compact and Its Religious Rationale

In the name of God, Amen. We, whose names are underwritten, the loyal subjects of our dread Sovereign Lord King James, by the Grace of God, of Great Britain, France, and Ireland, King, defender of the Faith, etc.

Having undertaken, for the Glory of God, and advancements of the Christian faith and honor of our King and Country, a voyage to plant the first colony in the Northern parts of Virginia, do by these presents, solemnly and mutually, in the presence of God, and one another, covenant and combine ourselves together into a civil body politic; for our better ordering, and preservation and furtherance of the ends aforesaid; and by virtue hereof to enact, constitute, and frame, such just and equal laws, ordinances, acts, constitutions, and offices, from time to time, as shall be thought most meet and convenient for the general good of the colony; unto which we promise all due submission and obedience.

In witness whereof we have hereunto subscribed our names at Cape Cod the 11th of November, in the year of the reign of our Sovereign Lord King James, of England, France, and Ireland, the eighteenth, and of Scotland the fifty-fourth, 1620.

Different labor systems also distinguished early Puritan New England from the Chesapeake colonies. Puritans expected young people to work diligently at their calling, and all members of their large families, including children, did the bulk of the work necessary to run homes, farms, and businesses. Very few migrants came to New England as laborers; in fact, New England towns protected their disciplined homegrown workforce by refusing to allow outsiders in, assuring their sons and daughters of steady employment. New England’s labor system produced remarkable results, notably a powerful maritime-based economy with scores of oceangoing ships and the crews necessary to sail them. New England mariners sailing New England-made ships transported Virginian tobacco and West Indian sugar throughout the Atlantic World.

This video discusses what life might have looked like for colonial women and the women in the Wampanoag Nation, who lived in the area around Plymouth and Massachusetts Bay. The Wampanoag had a matriarchal society where women held more positions of power than their colonial counterparts.

You can view the transcript for “Two Different Worlds: Women in 1620” here (opens in new window).

The term Puritan began as an insult, and its recipients usually referred to each other as “the godly” if they used a specific term at all. Puritans believed that the Church of England did not distance itself far enough from Catholicism after Henry VIII broke with Rome in the 1530s. They largely agreed with European Calvinists—followers of theologian John Calvin—on matters of religious doctrine. Calvinists (and Puritans) believed that mankind was redeemed by God’s grace alone, and that the fate of an individual’s immortal soul was predestined. The happy minority God had already chosen to save were known among English Puritans as the Elect. Calvinists also argued that the decoration or churches, reliance on ornate ceremony, and (they argued) corrupt priesthood obscured God’s message. They believed that reading the Bible promised the best way to understand God.

Puritans were stereotyped by their enemies as dour killjoys, and the exaggeration has endured. It is certainly true that the Puritans’ disdain for excess and opposition to many holidays popular in Europe (including Christmas, which, as Puritans never tired of reminding everyone, the Bible never told anyone to celebrate) lent themselves to caricature. But Puritans understood themselves as advocating a reasonable middle path in a corrupt world. It would never occur to a Puritan, for example, to abstain from alcohol or sex.

During the first century after the English Reformation (c.1530-1630) Puritans sought to “purify” the Church of England of all practices that resembled Catholicism, advocating a simpler worship service, the abolition of ornate churches, and other reforms. They had some success in pushing the Church of England in a more Calvinist direction, but with the coronation of King Charles I (r. 1625-1649), the Puritans gained an implacable foe that cast English Puritans as excessive and dangerous. Facing growing persecution, the Puritans began the Great Migration, during which about 20,000 people traveled to New England between 1630 and 1640. The Puritans (unlike the small band of separatist “Pilgrims” who founded Plymouth Colony in 1620) remained committed to reforming the Church of England, but temporarily decamped to North America to accomplish this task. Leaders like John Winthrop insisted they were not separating from, or abandoning, England, but were rather forming a godly community in America, that would be a “Shining City on a Hill” and an example for reformers back home. The Puritans did not seek to create a haven of religious toleration, a notion that they—along with nearly all European Christians—regarded as ridiculous at best, and dangerous at worst.