Problems on the American Frontier

With the end of the French and Indian War, Great Britain claimed a vast new expanse of territory, at least on paper. Under the terms of the Treaty of Paris, the French territory known as New France had ceased to exist. British territorial holdings now extended from Canada to Florida, and the focus of the British military shifted to maintaining peace in the new territories. However, much of the land in the North American British Empire remained under the control of powerful Native American confederacies, which rendered any British claims West of the Ohio Valley performative at best. Great Britain maintained 10,000 troops in North America after the war ended in 1763 to defend the borders and repel any attack by their imperial rivals.

British colonists, eager for fresh land, poured over the Appalachian Mountains to stake claims. The western frontier had long been a “middle ground” where different imperial powers (British, French, Spanish) had interacted and compromised with Indigenous Peoples. That era of accommodation in the “middle ground” came to an end after the French and Indian War. Virginians (including George Washington) and other land-hungry colonists had already raised tensions in the 1740s with their quest for land. Virginia landowners in particular eagerly looked to diversify their agricultural production beyond tobacco, which had stagnated in price and exhausted the fertility of the lands along the Chesapeake Bay. They invested heavily in the newly available land. This westward movement brought the settlers into conflict as never before with Native American tribes, such as the Shawnee, Seneca-Cayuga, Wyandot, and Delaware, who increasingly held their ground against any further intrusion by White settlers.

The 1763 Treaty of Paris proved to be a significant blow to Indigenous Peoples, who had viewed the conflict as an opportunity to gain additional trade goods from both sides. With the French defeat, many Native Americans who had sided with France lost a valued trading partner as well as an ally against the British. The encroachment of colonial settlers onto Native lands, as well as the increased British military presence, changed the situation on the frontier dramatically. After the French and Indian War, British troops took over the former French forts but failed to curry favor with the local tribes by exchanging gifts, as the French had done. They also significantly reduced the amount of gunpowder and ammunition they sold to the Native Americans, further worsening relations.

The importance of gift-giving in Native cultures cannot be overstated. The exchange of gifts was, and still is, a way to show respect, friendship, and honor someone. Gifts were a physical symbol of the relationship between two groups of people. When the new British residents of French forts neglected to establish a relationship with their Native neighbors by exchanging gifts, it was seen as an affront to the tribe and soured any relationship between the British and the Native Americans.

Relationships between colonists and Native Americans were complex and often violent. In 1761, a prophet from the Lenape-Delaware tribe named Neolin received a vision from the tribe’s primary deity, known as the Master of Life. The Master of Life told Neolin that the only way to enter Heaven would be to cast off the corrupting influence of Europeans, by expelling the British from Native lands: “This land where ye dwell I have made for you and not for others. Whence comes it that ye permit the Whites upon your lands…Drive them out, make war upon them.” Neolin preached the avoidance of alcohol, a return to traditional rituals, and pan-tribal unity to his disciples, including Pontiac, an Ottawa leader.

Whereas the French had maintained a peaceful and relatively equal relationship with their Native allies through trade, the British hoped to impose order and generate profit from tribal relationships. For example, while the French often engaged in diplomatic gift-giving, British General Jeffrey Amherst discouraged the practice and regulated the sale of firearms and ammunition to Native tribes. Most Native Americans, including Pontiac, saw this not as frugal imperial policy but as the disarmament of the tribes in preparation for war.

Pontiac took Neolin’s prophecy to heart and sparked a rebellion against British soldiers, traders, and settlers, which would come to be known as Pontiac’s War or Pontiac’s Rebellion. At its height, the pan-tribal uprising included Native peoples from the territory between the Great Lakes, Appalachians, and the Mississippi River. Though Pontiac did not command all of the tribes involved, his actions were key in triggering the uprising. In May 1763, Pontiac and 300 warriors from the Ottawa, Ojibwa, Potawatomi, and Huron tribes sought to take Fort Detroit by surprise, but the plan was foiled, resulting in a six-month siege of the British fort.

News of the siege quickly spread throughout the tribes and inspired more attacks on British forts and settlers. In May, the Wyandot tribe captured Fort Sandusky, the Potawatomis took Fort Saint Joseph, and the Miami tribe overtook Fort Miami. In June, a coalition of Ottawas and Ojibwes captured Fort Michilimackinac by staging a game of stickball (lacrosse) outside the fort. They chased the ball into the fort, gathered arms that had been smuggled in by a group of Native American women, and killed almost half of the fort’s British soldiers.

Modern-day lacrosse descends from and resembles games played by various Native American communities. These include games called dehontsigwaehs in Oee (“they bump hips”), Tewaaraton in Mohawk language (“little brother of war”), baaga`adowe in Ojibwe (“bump hips”) and kabucha in Choctaw.

Lacrosse is one of the oldest team sports in North America. There is evidence that a version of lacrosse originated in what is now Canada as early as the 17th century. Native American lacrosse was played throughout modern Canada but was most popular around the Great Lakes, Mid-Atlantic seaboard, and American South.

Today, the game is played by Native Americans as a way to connect with their ancestors and celebrate their heritage.

You can view the transcript for “The History of Lacrosse | Honoring the Native American Heritage” here (opens in new window).

Over the next year, the war spread along the backcountry from Virginia to Pennsylvania, triggering horrific violence on both sides. Firsthand reports of Native American attacks tell of murder, scalping, dismemberment, and burning at the stake. As these stories spread, they incited a deep racial hatred among colonists against all Native Americans, resulting in retaliatory violence. 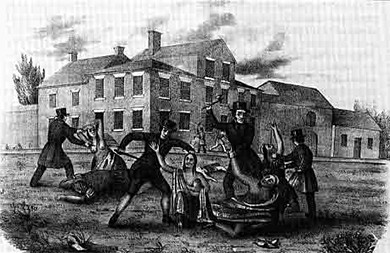 Figure 1. This nineteenth-century lithograph depicts the massacre of Conestoga in 1763 at Lancaster, Pennsylvania, where they had been placed in protective custody. None of the attackers, members of the Paxton Boys, were ever identified.

The actions of a group of Scots-Irish settlers from Paxton (or Paxtang), Pennsylvania, in December 1763, illustrates the deadly situation on the frontier. Forming a mob known as the Paxton Boys, these frontiersmen attacked a nearby group of Conestoga people of the Susquehannock tribe.

The Conestoga had lived peacefully with local settlers, but the Paxton Boys viewed all Native Americans as savages and they brutally murdered the six Conestoga they found at home and burned their houses. When Governor John Penn put the remaining fourteen Conestoga in protective custody in Lancaster, Pennsylvania, the Paxton Boys broke into the building and killed and scalped the Conestoga they found there. Although Governor Penn offered a reward for the capture of any Paxton Boys involved in the murders, no one ever identified the attackers. Some colonists reacted to the incident with outrage. Benjamin Franklin described the Paxton Boys as “the barbarous Men who committed the atrocious act, in Defiance of Government, of all Laws human and divine, and to the eternal Disgrace of their Country and Colour,” stating that “the Wickedness cannot be covered, the Guilt will lie on the whole Land, till Justice is done on the Murderers. The blood of the innocent will cry to heaven for vengeance.” Yet, as the inability to bring the perpetrators to justice clearly indicates, the Paxton Boys had many more supporters than critics.

Pontiac’s War lasted until 1766. Native American tribes attacked British forts and frontier settlements, killing as many as 400 soldiers and 2,000 settlers. Disease and a shortage of supplies ultimately undermined the tribes’ war effort, and in July 1766 Pontiac met with British official and diplomat William Johnson at Fort Ontario and settled for peace. Though the tribes did not “win” Pontiac’s War, they succeeded in fundamentally altering the British colonial government’s policies relating to Native Americans. The war made British officials recognize that peace in the West would require royal protection of Native lands and heavy-handed regulation of Anglo-Native trade activity. During the war, the British Crown issued the Royal Proclamation Line of 1763, which marked the Appalachian Mountains as the boundary between Native lands and the British colonies.

The Proclamation Line aimed to forestall further conflict on the frontier, which became the clear focus of tension in British North America. British colonists who had hoped to move west after the war resented this restriction, believing the war had been fought and won to ensure the right to settle the west and viewing the Proclamation Line as a setback to their vision of westward expansion.

This short clip describes the context of Pontiac’s War and its aftermath.

You can view the transcript for “Pontiac’s Rebellion” here (opens in new window).

Click through this activity to learn more about the significance of the Proclamation Line.

Aftermath of the War

Coinciding with the end of the Seven Year’s War, the effects of Pontiac’s War were substantial and widespread. The war proved that coercion was not an effective strategy for imperial control, though the British government would continue to employ this strategy to consolidate their power in North America, most notably through the various taxation Acts imposed on their colonies. Additionally, the prohibition of Anglo-American settlement in Indian country, especially the Ohio River Valley, sparked discontent amongst colonists, who viewed it as their right.

The French immigrant Michel-Guillaume Jean de Crèvecoeur articulated this discontent most clearly in his 1782 Letters from an American Farmer when he asked, “What then is the American, this new man?” In other words, why did colonists start thinking of themselves as Americans, not Britons? Crèvecoeur suggested that America was a melting pot of self-reliant individual landholders, fiercely independent in pursuit of their own interests, and free from the burdens of European class systems. This notion of American exceptionalism fit with the self-conceptions of the new nation, albeit one that imagined itself as White, male, and generally Protestant.

American exceptionalism: the idea that America is uniquely free of traditional class hierarchies

Pontiac (Obwandiyag): war chief of the Ottawa (or Odawa) tribe, who led Pontiac’s War against the British. Many 19th-century accounts of the war portray him as the leader, but later historians argued that his involvement had been exaggerated. Today, he is viewed as an important local leader who began the wider movement for Native freedom from the British but did not command it.

Proclamation line: a line along the Appalachian Mountains, imposed by the Proclamation of 1763, west of which British colonists could not settle.

tribal confederacies: North American native tribes frequently joined together in loose alliances called confederacies. These individual tribes would pledge to protect and assist each other with military endeavors, including the subjugation of other tribes around them. Several of these confederacies established what might be termed “empires” and European colonies eagerly sought them out as allies for trade and war.