Henry “Box” Brown (c.1816–after 1889) was a 19th-century enslaved Virginian who escaped to freedom at age 33 by arranging to have himself mailed in a wooden crate in 1849 to Philadelphia, Pennsylvania abolitionists. He left behind his enslaved wife and children.

This video from Learning for Justice tells more about Brown’s escape and story.

For a short time Brown became a noted abolitionist speaker in the northeast United States. He lost the support of the abolitionist community, notably Frederick Douglass, who wished Brown had kept quiet about the details of his escape so that others could have used similar means. As a public figure and fugitive slave, Brown felt endangered by passage of the Fugitive Slave Law of 1850, which increased pressure to capture escaped slaves. He moved to England and lived there for 25 years, touring with an anti-slavery panorama and becoming a mesmerist and showman. Mostly forgotten in the United States, he married an English woman and had a second family with her. He returned to the U.S. with them in 1875 and continued to earn a living as an entertainer. 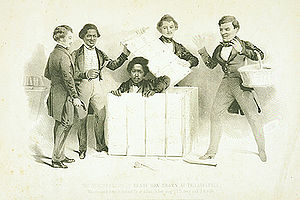 The Resurrection of Henry Box Brown at Philadelphia, a lithograph by Samuel Rowse published in 1850.

Song, sung by Mr. Brown on being removed from the Box:

I waited patiently for the Lord

And he, in kindness to me, heard my calling

And he hath put a new song into my mouth

That has set his hope, his hope in the Lord!

O Lord! my God! great, great is the wondrous work

Which thou hast done!

If I should declare them — and speak of them

They would be more than I am able to express.

I have not kept back thy love, and kindness, and truth,

From the great congregation!

Withdraw not thou thy mercies from me,

Let thy love, and kindness, and thy truth, always preserve me

Let all those that seek thee be joyful and glad!

Be joyful and glad!

And let such as love thy salvation