The Columbian Exchange transformed both sides of the Atlantic with dramatically disparate results. New diseases wiped out entire civilizations in the Americas, while newly imported nutrient-rich foodstuffs enabled a European population boom. Spain benefited most immediately as the wealth of the Aztec and Incan Empires strengthened the Spanish monarchy. Spain used its new riches to gain an advantage over other European nations. But this advantage was soon contested. Portugal, France, the Netherlands, and England all raced to the New World, eager to match the gains of the Spanish. Native peoples greeted the new visitors with responses ranging from welcome cooperation to aggressive violence, but the ravages of disease and the possibility of new trading relationships enabled Europeans to create settlements all along the western rim of the Atlantic world. New empires would emerge from these tenuous beginnings, and by the end of the seventeenth century, Spain would lose its privileged position to its rivals. An age of colonization had begun and, with it, a great collision of cultures commenced. These sources chronicle the European challenges to Spain’s colonial dominance and the collisions between Europeans and Native Americans.

During the contact period, the frontier was constantly shifting and places that are now considered old were once tenuous settlements. This watercolor painting depicts New Orleans in 1726 when it was an 8-year-old French frontier settlement, nearly forty years prior to the Spanish acquisition of the Louisiana territory. In the foreground, enslaved Africans fell trees on land belonging to the Company of the Indies, and another enslaved man spears a massive alligator. Land has been cleared only just beyond the town limits and a wooden palisade provides meager protection from competing European empires. 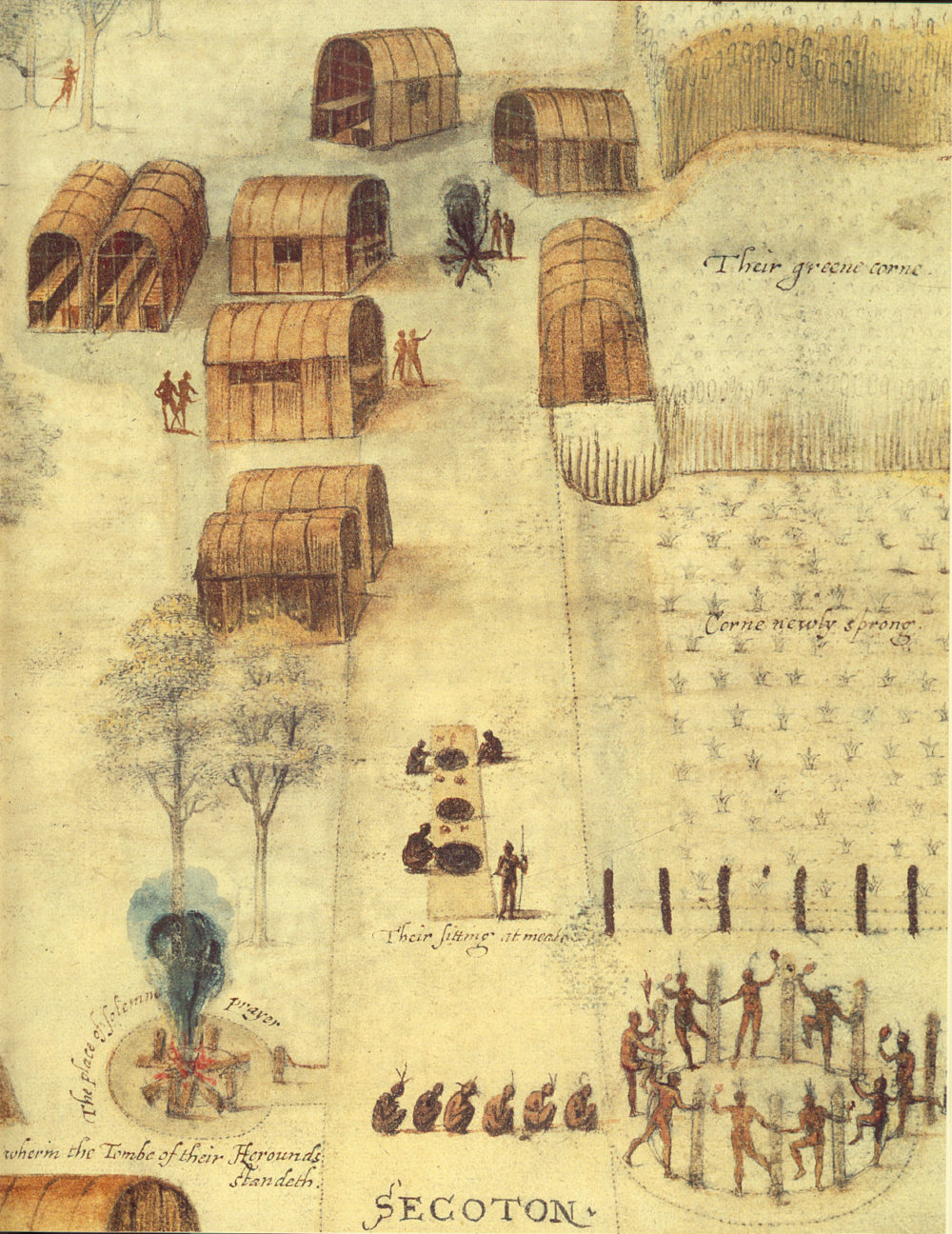 Native settlements were usually organized around political, economic, or religious activity. John White shows this Algonquin community engaged in some kind of celebration across from the fire he identified as “The place of solemne prayer,” indicating that ceremonial activity could be both solemn and raucous. In the center of the image, a communal meal has been laid alongside crops that are in varying stages of growth, suggesting the use of planting techniques like crop rotation. He also shows the interior of several longhouses, made of bent saplings and covered with bark and woven maps. Among the Powhatan, similar structures were called yehakins. In putting the longhouses and the settlement in a series of rows, White’s English perspective comes through: archaeological evidence shows that these houses were usually situated around communal gathering places or moved next to fields under cultivation not ordered in European-style rows.