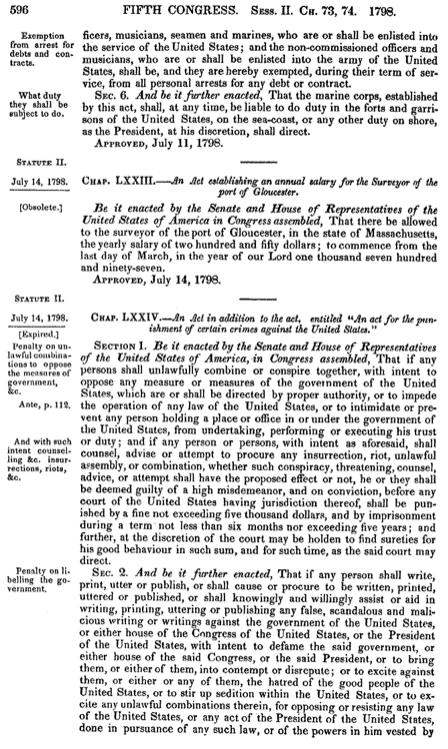 Section 1. Be it enacted by the Senate and House of Representatives of the United States of America, in Congress assembled, Penalty on unlawful combinations to oppose the measures of government, &c.
Ante, p. 112.

That if any persons shall unlawfully combine or conspire together, with intent to oppose any measure or measures of the government of the United States, which are or shall be directed by proper authority, or to impede the operation of any law of the United States, or to intimidate or prevent any person holding a place or office in or under the government of the United States, from undertaking, performing or executing his trust or duty; And with such intent counselling &c. insurrections, riots, &c.and if any person or persons, with intent as aforesaid, shall counsel, advise or attempt to procure any insurrection, riot, unlawful assembly, or combination, whether such conspiracy, threatening, counsel, advice, or attempt shall have the proposed effect or not, he or they shall be deemed guilty of a high misdemeanor, and on conviction, before any court of the United States having jurisdiction thereof; shall be punished by a fine not exceeding five thousand dollars, and by imprisonment during a term not less than six months nor exceeding five years; and further, at the discretion of the court may be holden to find sureties for his good behaviour in such sum, and for such time, as the said court may direct.