Putting It Together: British North America 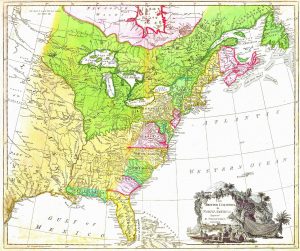 Events in seventeenth-century England were important to the establishment and progress of the colonies in America. During the Puritan Revolution, when there was freedom of religion in the mother country, and when no grants of land in the Americas were forthcoming from the government (for there was no “Crown”), no colonies were founded. With the Restoration of Charles II, however, who was excessively extravagant and a great believer in rewarding his friends and nobility for their service to the Crown, colonization began again.

As the British sought to expand their empire, they used the theory of mercantilism and set up an economic and political system designed to benefit the mother country and her colonies. Through the passage of the Navigation Acts and the creation of the Board of Trade, the government sought to increase the nation’s wealth through commercial ties with the New World. The colonies provided raw materials for British industry and, in turn, purchased finished goods produced in the mother country.

This period of time was marked by not only economic changes, but cultural changes, too. The Scientific Revolution led to the Enlightenment. In both, an emphasis on reason was key. Ideas from the Enlightenment concerning human nature and that of government put forth by philosophers such as John Locke helped to inspire the American Revolution and shape the United States. The Great Awakening, a spiritual revival felt both in Britain and the colonies, focused on an individual’s personal relationship with God. The Tennents, Jonathan Edwards, and George Whitefield all were key figures in the Great Awakening in the colonies, which resulted in the spread of new evangelical Protestant denominations.

British expansion in the colonies lead to conflict between colonists and the Indigenous population. During the course of these wars, colonists and Indian confederacies forged alliances and chose sides. Metacom’s War was a significant engagement between British colonists and local New England Native groups. The war was one of the most costly in American history, both in terms of its consequences for the colonial economy and population. It also proved devastating for Native people. Bacon’s Rebellion highlighted the ongoing tensions between the colony’s residents and their government over the availability of land, which in turn caused problems with the Native population.

The seventeenth century saw the creation and maturation of Britain’s North American colonies. Colonists endured a century of struggle against unforgiving climates, hostilities with Native tribes, and imperial intrigue. They did so largely through ruthless expressions of power. Colonists conquered Native peoples, attacked European rivals, and joined a highly lucrative transatlantic economy rooted in slavery. After surviving a century of desperation and war, British North American colonists fashioned increasingly complex societies with unique religious cultures, economic ties, and political traditions. These societies would come to shape not only North America, but soon the entirety of the Atlantic World.