Putting It Together: Colliding Cultures 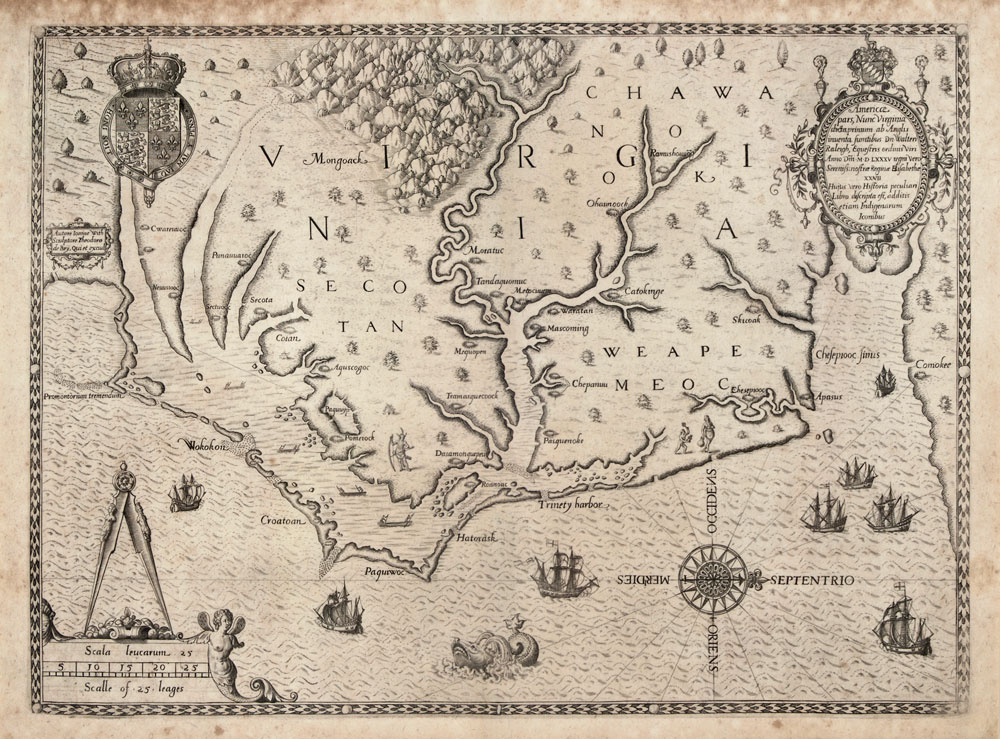 Figure 1. German artist and engraver Theodor de Bry drew several maps and images of the New World, based solely on records and accounts from others. This is the first detailed map of European exploration in the New World. It shows the Virginia and North Carolina coast in 1585–1586.

The New World offered Europeans a wealth of opportunity. In the early days, and for the Spanish, that meant little more than looting the gold and silver of the Aztecs and Inca. Soon enough, however, trade would emerge as the way to make a fortune in the Americas.

Spain’s empire in the New World was massive, and it was rich. Protecting that empire against European incursion would push the Spanish into North America and new outposts in Florida and what would become the U.S. Southwest. But that expansion came at a cost; Native Americans were compelled to labor, with disastrous consequences for their culture and their health.

The Spanish would not be the only Europeans in the New World for long. The arrival of the French in North America marked a new economy—the fur trade. The fur trade was incredibly lucrative, but it would not lead to widespread settlement. The French came to Canada to trade and although some stayed, they did not do so in the numbers their Dutch and English counterparts did. The Dutch settlements in New Netherland were built on trade. They established settlements, but the number of Dutch immigrants remained relatively small, leaving them with a labor deficit. The Dutch would look beyond their homeland for settlers, creating one of America’s most diverse colonial societies. And like their English neighbors in North America, the Dutch turned to Africa for labor.

English settlement in North America would transform the continent. While early attempts, notably at Roanoke, failed, subsequent settlements succeeded. In the Chesapeake, the early days at Jamestown were disastrous, and serve as a microcosm of colliding cultures. English incursion into Native lands led to war, and the English barely survived. But ultimately their colony would be successful. The turn to tobacco allowed Virginia not only to survive, but to prosper, and new arrivals kept English dominion in the Chesapeake expanding. Tobacco’s demand for labor would have the English, too, come to rely on enslaved African labor.

English settlers to the north had different priorities. Religious separatists in New England hoped to build their “city on a hill” shining as a beacon of Puritanical Christianity. Their colonies flourished and encouraged future immigration to North America. While all men there were not created equal, the Puritans did incorporate broader popular participation in government, a standard that would come to be seen as quintessentially American and expanded in the future.

The arrival of Europeans in the Americas would signal the beginning of the Columbian Exchange, and mercantilism would mean that Europeans viewed the colonies as a place to benefit their homelands. The exchange of plants, animals, foods, products, and people would transform the Americas; the arrival of slaves in the Virginia colony in 1619 would mark the beginning of a new kind of American economy, one built upon enslaved labor, and one that would have consequences for centuries.

Yet, the fledgling settlements in Virginia and Massachusetts paled in importance when compared to the sugar colonies of the Caribbean. Valued more as marginal investments and social safety valves where the poor could be released, these colonies nonetheless created a foothold for England on a vast North American continent. And although the seventeenth century would be fraught for England—religious, social, and political upheavals would behead one king and force another to flee his throne—settlers in Massachusetts and Virginia were nonetheless tied together by the emerging Atlantic economy. While commodities such as tobacco and sugar-fueled new markets in Europe, the economy grew increasingly dependent upon enslaved labor. Enslaved Africans transported across the Atlantic would further complicate the collision of cultures in the Americas. The creation and maintenance of a slave system would spark new understandings of human differences and new modes of social control. The economic exchanges of the new Atlantic economy would not only generate great wealth and exploitation, but they would also lead to new cultural systems and new identities for the inhabitants of at least four continents.