Now that we have identified some relevant and related details, we can move on to examining the logic that both Elias Bourdinot and Andrew Jackson use in their speeches. As they employ rhetoric, or the techniques of persuasion, we should be looking for how they make their arguments and what they think is at stake. Completing a rhetorical analysis means looking closely at the words used in a passage—why they were used the way they were and what their implications are. Understanding the rhetoric means understanding the entire rhetorical situation as well, including the author, their audience, their purpose in writing, and the context of their content. During a rhetorical analysis, you also examine their style, tone, claims they make, or specific types of strengths or weaknesses within their arguments (such as types of fallacies). Often, a rhetorical analysis also includes an investigation of the types of appeals used in an argument, such as the ethos, pathos, and logos (appeals to credibility, emotion, or logic). For this exercise, we will not get into a detailed rhetorical analysis, but we still want to closely examine the two speeches and pull out the main concepts and arguments made by the authors.

This video explains rhetorical analysis and how examining the words that a speaker uses can help us better understand their argument. In the video, Bernie Sanders makes an argument on a late-night talk show that “we” the people of the United States need to find rational solutions to our problems together, and that he (and not Donald Trump) is the right person to do that. The context—the author, subject, audience, context, genre, and medium—all come into play in considering the rhetorical strengths and purposes of the message.

You can view the transcript for “Rhetorical Analysis: Beyond ethos, pathos, and logos” here (opens in new window).

Rhetorical Analysis: What is a “Nation?”

One simple way to examine the rhetoric from the two passages is to compare how they each utilize different words. We already looked at how they differed in their use of “civilization.” Now let’s look at another key term that appears in both excerpts–the concept of a “nation.”

While reading for mentions of the “nation,” we should also be attentive to synonyms such as “Republic” and the related concept of the “state,” both of which appear in Jackson’s speech to Congress.

Now that you have seen an analysis that focuses on the concept of the “nation,” and have attended to the persuasive arguments being made about that idea, let’s move on to investigate a different key term and concept found in the excerpts.

Look for places where both speakers address the concept of generations—both those of the past and those that will (perhaps) exist in the future. Start by looking for references to “sons” and “fathers” and “daughters.” This is an open-ended exercise, but you can use the spaces below to jot down your ideas.

What do the speakers say about what’s happened to ancestors in the past and about what might happen to future generations? What do Boudinot and Jackson think is at stake if their audience is persuaded to think as they do and their preferred objectives are met? What will the consequences be?

Once you’ve summarized a few of their arguments about this topic, consider how persuasive their statements might or might not be with their intended audiences. Would Boudinot get his school funding? Would Jackson get his votes? How convincing do you find each speaker’s effort to persuade?

We can see that both speakers carefully choose their words in an effort to enhance their arguments. Jackson addresses his ideal listener as a “good man” who would agree with his understanding of the nation as one of expanding industry and “pecuniary” (i.e., monetary) advantage. Indeed, he also mentions future “prosperity” to entice his presumably profit-minded audience to see the benefits of “speedy removal.”

For Boudinot, Indigenous peoples have the ability to establish and cultivate a “nation” as Whites understand that concept; for Jackson, a “few savage hunters” have only “rude [i.e., simple and undeveloped] institutions,” and he does not suggest that these individuals could become a nation alongside the others of the world.

Both speakers suggest that something is at stake. For Boudinot, it is the opportunity to evolve and become an “enlightened” nation (enlightenment being an important philosophical idea at the time).

For Jackson, there is the promise of “pecuniary” (monetary) gain, the lessening of conflict, and a preservation of sorts for Indigenous culture, but only if it can be relocated and kept under “the protection of the Government,” an arrangement that is not quite that of a sovereign Indigenous nation. Jackson also cites the example of the Eastern tribes that were “annihilated” or “melted away,” and tries to convince his audience that his relocation policy is preferable to another such tragic episode. Here he is appealing to his listeners’ feelings of sympathy, having already tempted them with promises of financial gain and a fair bit of implicit flattery, i.e., “good men” who make rational governing decisions.

A rhetorical analysis typically involves examining the modes of persuasion that the author uses. 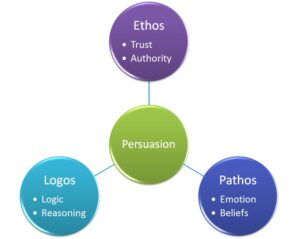 Figure 1. Common modes of persuasion include appeals to ethos, pathos, and logos.

In these passages, both authors make strong appeals using these modes of persuasion. For example, Boudinot relies on logos when he says, “And because she will be useful to you in coming time, she asks you to assist her in her present struggles.”  Jackson likewise relies on logic when he says, “The present policy of the Government is but a continuation of the same progressive change by a milder process.” He is emphasizing that what’s being done isn’t actually all that bad, and that the government has things under control (also a bit of ethos as he encourages others to accept the authority of the government).

Jackson mostly relies on pathos, however, as he works to draw out strong emotional feelings and use emotional words, like when he asks, “What good man would prefer a country covered with forests and ranged by a few thousand savages…?” Boudinot also relies on pathos in his passage when he poetically says things like, “Yes, methinks I can view my native country, rising from the ashes of her degradation, wearing her purified and beautiful garments, and taking her seat with the nations of the earth…”

When thinking about how the speaker is trying to make a convincing case, bear in mind who the audience is and what the speaker is asking for. The relationship between speaker and audience is an important aspect of the rhetorical context. Boudinot is raising money for a school that would “civilize” Indigenous people, and is urging that his largely White audience see Native people as already working toward this assimilationist goal.

Jackson is arguing to Congress that they should accept his rationale for removal as well as his view of the prospects for Indigenous people. He’s looking for political support. Knowing the audiences, the goals, and the alleged stakes will help you locate relevant arguments in the two texts. Typically, a speaker employing rhetoric is trying to get the audience to accept his way of thinking and to act in accordance with his priorities. We can see why political debates are so often used as examples of a rhetorical situation, given that support for or rejection of specific policies and enforceable laws is necessarily a process of careful negotiation.

Now that you’ve carefully read both documents and compared their perspectives on what constitutes a nation, let’s consider the intended audiences for their message, and what they hoped to achieve.

The Value of Rhetorical Appeals

Note that these two excerpts give us a snapshot of some of the most contentious issues of the day, and that both are touching on some of the ideas that were in play in the larger national conversation. For example, the philosophical influence of the Enlightenment, whose principles informed the creation of the United States, is also evident here. That is, both speakers are addressing the question of rational self-government and of how we should understand the sources of legitimate political authority. They are also both referring to the possibilities inherent to westward expansion, an undertaking that will be profoundly complicated by the issue of slavery’s parallel expansion and by that of the Indian Removal policy.

We can see that this particular type of primary document, one that makes an argument and takes a position on a policy or preferred outcome, provides historians with access to the crucial debates of the past, and gives us an opportunity to think through the persuasive appeals that ultimately prevailed.

For this activity, we will look at one other excerpt related to Indian Removal.

This passage was written by Cherokee Chief John Ross in a protest to Congress, 1836. Some keywords are highlighted and defined to help understand the text. As you read it, consider Ross’ rhetoric—how does he construct his argument, and what makes it convincing?

How does Ross appeal to pathos and logos? This is an open-ended exercise, but you can use the space below to jot down your ideas.

rhetoric: the art of persuasion, or the techniques and focused appeals that a speaker or writer thinks will be effective in reaching an audience